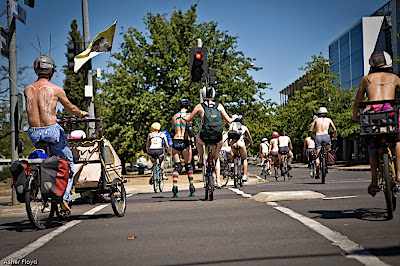 For those who’ve come in late the manifesto of the ride was:

Celebrate bodies and bikes while making a stance against oil usage, consumerism and the negative body image portrayed by the mass media.

We face automobile traffic with our naked bodies as the best way of defending our dignity and exposing the unique dangers faced by cyclists and pedestrians plus all the negative effects of oil, cars, war, consumerism and non-renewable energy.

Apparently it went well aside from some unusual tan lines this morning. Huge thanks to Asher Floyd for making his photography of the event available to us.

WNBR organiser Pip had this to say:

Well we had about 25-30 riders so I was happy with that turn out. I mean hopefully we’ll have more next year but at least it wasn’t just 5 of us. That’d be weird…

Apart from the ridiculous sunburn patterns I’m now sporting, the day went really well. I had a couple of chats with the cops, one of which I was wearing nothing but undies and body paint. Very surreal having a serious conversation with only painted on flowers on your boobs!

Everyone really enjoyed themselves and we had lots of possitive feedback, the majority of it was positive anyways.

I tend to agree with some of the comments made above. An event can hardly be stated a success when;

1) No more than 30 people turned up to support it
2) No one (ie. the public) knew what the event was highlighting CT reported it as being ‘body image’
3) It was poorly advertised outside of Facebook.

In fact, in reading the Facebook page – the whole event seemed more pre-occupied with getting naked with a bunch of strangers or friends rather than advocating for body-image acceptance.

An event such as this has the potential to actually be well attended -perhaps the organisers could look beyond Facebook for advertising next year to encourage greater participation amongst the community and highlight the actually objective of the event, rather than just promote it as a nudy run amongst friends on bikes.

If I had of known that I would have gone along. It would have been brutal in hockey skates though.

The public really had no idea what we were about so I think we need to address that better next year.

But it was apparently a success?

…and surely it would be ‘da fuzz’?

I remember back in the day when you could send your 4 year old to the local shops to buy you a pack of smokes, when women nor aboriginals were allowed to vote, AND when ‘naked’ meant that you had no clothes on. Ahhhh the memories.

Reading the reports in the interstate papers the fuzz didn’t have any problems at all in Melbourne where guys were allowed to ride completely naked – they took their jocks and g-strings off after the cops said it was OK. This contrasted with Sydney where the cops took a very hard line and forced all the guys to wear shorts over their jocks and g-strings – strange indeed for a city which has the Mardi Gras. Perhaps it’s a hangover from World Youth Day.

Gorgeous!! If I had a body like that I’d go that nekkid!

Pip has a cracking body

Wow what a turn out. Naked ambition I suppose

‘Sir have you got a licence for that penis?’

As to why the ‘naked’ bikeride isn’t actually naked, I think the ACT is one of the places that has laws about people ‘exposing their person in public’, with a legal interpretation that ‘your penis is your person’.

I think that is exactly what has happened sepi.
This event has been around for a while now (8 years I believe)
I think that it wouldn’t make as much sense if it was just about one issue.

For marketing purposes it is better to have one clear message, rather than a whole lot of waffly ones, no matter how worthy.

They once you have garnered attention for your event, you can then build on it with the extra messages.

I agree.
I thinkn that they are all very important issues it can bring awareness to all of them.

I remember back in the day when you could send your 4 year old to the local shops to buy you a pack of smokes, when women nor aboriginals were allowed to vote, AND when ‘naked’ meant that you had no clothes on. Ahhhh the memories.

Vandn Vandn - 1 hour ago
No...you merely need to be Tom Hanks or our precious Kylie to enter into Queensland and choose your place of self isolation..... View
Community 5

@The_RiotACT @The_RiotACT
While some of us baked sourdough & others took to online shopping to help us through COVID-19, Kim Treasure entered the weird & wonderful world of the horse owner https://t.co/Gys0labgfb (39 minutes ago)