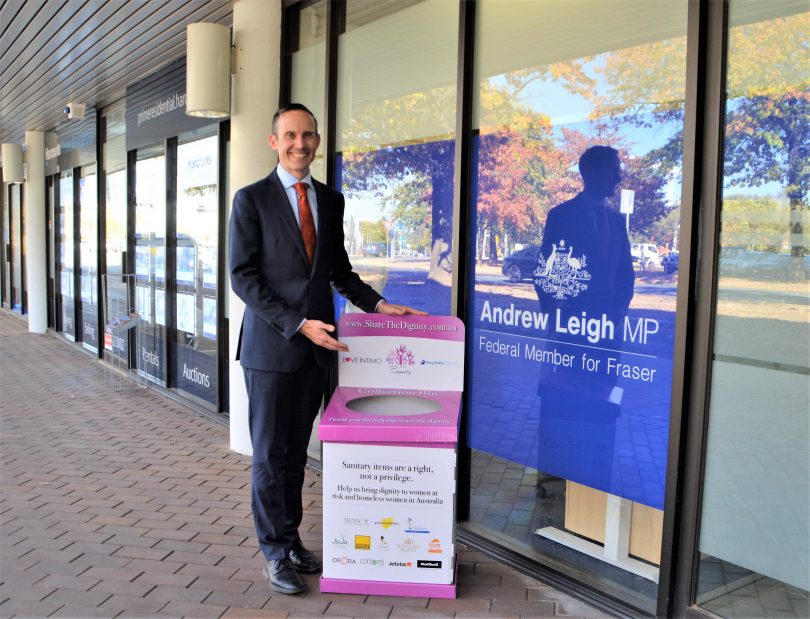 A male Federal MP for an ACT electorate has thrown his support behind addressing one of the distressing effects of female homelessness that often flies under the radar – a lack of essential sanitary items such as pads and tampons.

Member for Fenner Andrew Leigh is calling on Canberrans to take part in Share the Dignity’s April drive to collect around 7,000 packets of pads and tampons to help the growing numbers of women and girls experiencing homelessness in the city.

Dr Leigh, who has a collection box at his Braddon electorate office, has also added his weight to the charity’s calls for an end to taxing sanitary products.

“No woman should have to choose between a meal and sanitary products,” Dr Leigh said.

“Last year, more than 600 women were listed as homeless in the ACT. That’s hundreds of women who face the struggle of choosing between spending money on essential sanitary items or having a roof over their heads.”

Dr Leigh said that the need for sanitary items sometimes gets forgotten when people think about the needs of the homeless.

“It is one of those important campaigns for male politicians to support as well as our female colleagues,” Dr Leigh said.

“We know that across the ACT that access to sanitary products is a challenge particularly for women who are in homeless shelters or vulnerable situations and it just stretches the budget a bit further for some of our most vulnerable community members.”

Share the Dignity founder Rochelle Courtenay said the organisation, through its bi-annual drive, helps in a small way to alleviate the undignified situations thousands of women across the country have to endure.

“So many women, every month, have to forfeit sanitary products because they cannot afford them,” Ms Courtenay said.

“Many mothers have to choose between buying tampons and feeding their children. Girls miss out on school simply because families cannot afford to buy the basics of necessities.

“When they cannot have access to the essential feminine products women become extremely resourceful…by using wadded up newspaper, or toilet paper, or socks. This should not be happening.”

Ms Courtenay said that nationwide the charity is aiming to collect 200,000 packets of pads and tampons during the April ‘dignity drive’.

In the ACT, Share the Dignity works with all the local charities that help women in need and aims to collect just over 7000 packets of pads and tampons to fill the forecast need until its next dignity drive in August.

“In less than a month we collected just over 104,000 signatures,” Ms Courtenay said.

“Feminine hygiene products are not a luxury therefore they should not be taxed. Women who cannot afford them have no way of pursuing a normal public or private life and are at risk of jeopardising their health.”

Dr Leigh told The RiotACT that he supported Share the Dignity’s move.

“We strongly support the notion that tampons and pads should be GST-free,” said Dr Leigh.

“It just doesn’t make any sense that Viagra is in the GST-free category and tampons and pads are subject to GST.”

Ms Courtney said that on any given night in Australia, one in 200 people are homeless. Of these, 44 per cent are female and 27 per cent are children under the age of 18, with 55 per cent of females citing family violence as the reason they are homeless.

Share the Dignity’s pink collection boxes are located in a range of places throughout Canberra, including Dr Leigh’s electorate office at 8/1 Torrens Street, Braddon. For a full list of locations or to find further information please go to the charity’s website by clicking here.

And not to diss the menstrual cup evangelists, but they are probably not the best solution for people who are homeless. You must have clean hands since you handle the body of the cup. They should be cleaned between uses – a quick wipe and go is fine if you’re caught out, but washing with hot soapy water is best between uses. Between periods, menstrual cups must be thoroughly washed, and frankly I think they should be boiled as well. For something that undergoes multiple uses, TSS is more of a concern.

Sure, offer them, but also remove GST from sanitary products, and provide a subsidy for purchases up to a certain amount per month on presentation of a pensioner’s card.

This reminds me of same sex marriage. If only Labor had been in government for some period during the last ten years.

Menstrual cups would be more helpful, convenient, and sanitary for those wanting to donate :)

Does Andrew Leigh support removing the GST from menstruation products?

Why not supply menstrual cups instead? Reusable, safe, and environmentally friendly.

Need washing and homeless my not have access to water when they need it.

Great article that draws attention to a worthy cause, it’s just a shame it’s almost at the end of the April drive.

Great initiative Mr Leigh .... while you are at it could you please push the wider issue of removal of GST on all women’s sanitary products ... four years ago my daughter was part of a movement by young women here in Canberra to try to change this ... in spite of collecting around 5000 signatures they were ignored ... time for a change

This important issue is referred to in the article if you click on the link.

I did read it ... glad something is being done but just think it is a pity that the voices of young women who were keen to be part of the process four years ago were ignored until it became politically expedient to look at this issue.

Fair point. Perhaps those young women helped to prepare the way though and their advocacy is part of the reason the issue is getting more prominence now.

Women were arguing against the GST on sanitary products before the GST was implemented. Its heartening to know that young women continue the push to repeal the tax.

Homeless does not mean on the street. So roof over the head argument is wrong. Homeless also counts over populated and living with friends.

Of those living on the street most of them are male.

How about they focus on not keeping them homeless?

The donations also go towards women who are victims of domestic violence and to teenage girls, not just homeless women.

And providing sanitary products is an immediate service - homelessness and poverty can’t be fixed the same way.

William Taylor - 1 hour ago
There is an easy solution. Don’t go round the parliamentary triangle. Go east to the airport first, then branch south along... View
James Balean - 6 hours ago
Jerome Boland if somebody wanted to put a tram track through your property, you’d pay for them to do so? View
News 63

Paul Mills - 2 hours ago
Too many medium density developments with zero design merit. Welcome to Northbourne canyon. View
Lynne Staunton - 4 hours ago
Julie Arnold but at least when the next big fire comes through that way there us now a decent fire break to protect the inner... View
Linda Johnston - 6 hours ago
Nick Anderson I think it goes back earlier than Forde. I remember going into parts of Tuggeranong and having absolutely no id... View
Sport 5

Lucas Pesian - 3 hours ago
Rest In Eternal Peace Chief. View
Becc Rohrlach - 4 hours ago
RIP....you were such a wonderful man....thoughts and prayers with David, Kellie and all your family xo View
Property 1

Brindie - 3 hours ago
This is yet another planning failure of the ACT Government. A site designed for 44 units will now have 149 apartments. The de... View
Business 2

Tony Holliday - 4 hours ago
Scott Holliday yes, I saw that earlier this year. Quite remarkable. View
Gerard Dwyer - 15 hours ago
Gail Neuss I would love to visit your area soon. I have another areas in Shannons flat I want to get to soon as well. View
News 1

Stephen Saunders - 4 hours ago
As I write, common sense is winning this one, 63-37. When useless NCA couldn't help us on the ASIO Building, Brindabella Park... View
Property 1

Rauny Worm - 7 hours ago
Yes we can View
News 5

Adrien Hopkins - 15 hours ago
I called in to get a coffee yesterday but you had closed early View
Rob - 16 hours ago
Any place frequented by a smiling dog has to be good! View
show more show less
*Results are based on activity within last 7 days

UPDATED 4:00 pm A lockdown at Canberra Grammar School has been lifted after a threatening email was sent to the school...
News 63

A violent brawl at Binalong near Yass during a bushfire fundraising event on Saturday night (15 February) has seen one...
Opinion 83

A cookie-cutter approach to planning and overdevelopment is condemning Canberra's new suburbs to boring uniformity and making them incapable of...
News 82

Opposition leader Alistair Coe has asked Canberrans to have higher expectations ahead of this year’s election following the Government’s budget...
News 30

Colder winter sees surge in demand for shelter from homeless

@The_RiotACT @The_RiotACT
Probing the polls: who pays the price for technology and light rail? https://t.co/2jHLkfqY8V (34 minutes ago)

@The_RiotACT @The_RiotACT
The planning authority has rejected claims that it is a toothless body unwilling to fight for its decisions in the courts, defending its deal with Zapari that will see the company's controversial Coombs development proceed. Check out what changed https://t.co/16ycDV9SUb (2 hours ago)

@The_RiotACT @The_RiotACT
ACT motorists who use a mobile phone while driving could soon have an extra deterrent, with ACT Gov investigating the introduction of mobile phone detection cameras https://t.co/7dDIpnuYjs (4 hours ago)