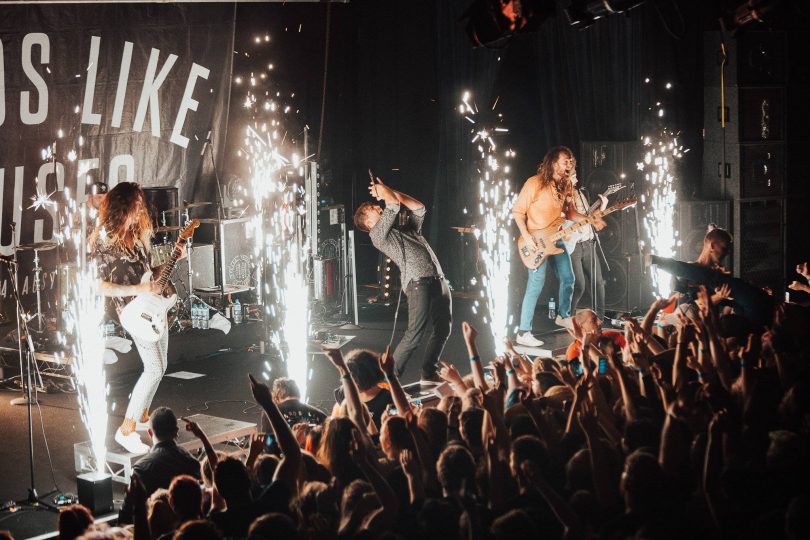 Hands Like Houses are fighting to change noise laws in the city centre. Photo: Supplied

Politicians, musicians and advocates will join forces to fight for live music after concerns that a potential new hotel in the heart of Civic could kill off live music and nightlife in the city.

But there are fears that the establishment of the hotel would turn the area into a more residential zone, putting businesses at risk of noise complaints and killing nightlife in the process.

The current night-time limit for noise in Canberra is 50 decibels, the same level as a conversation within a living room.

So on International Make Music Day this Friday (21 June), MusicACT is throwing a concert to change sound and planning laws with a huge lineup of SAFIA, Hands Like Houses, Citizen Kay, Teen Jesus and the Jean Teasers and YOUNG MONKS to throw their support behind live music. 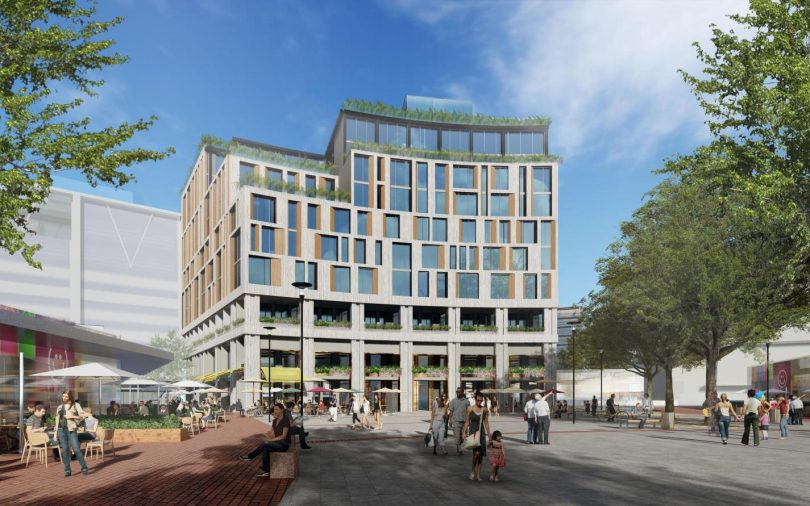 Could this building be the death of live music in the city? File photo

Greens leader Shane Rattenbury, who will attend the event, said there is a risk that a new hotel in Garema Place will slowly close down live music venues and said the solution was to create an entertainment precinct in the city.

“At the moment, there is a risk that more people residing in the city will slowly close down our live music venues,” Mr Rattenbury told Region Media. “That’s why the Greens would like to see an entertainment precinct put in place in Civic, as well as other places across Canberra.

“We see entertainment precincts as an opportunity to be clear with the community, businesses and residents alike, about how much noise can be made, and in what hours.

“At the moment, there is no right for pubs or night clubs to make noise. Instead, this is currently based on a complaints system. Designating entertainment precincts is a far better option.”

Citizen Kay said it was an easy decision to raise his voice to fight for live music in his hometown.

“I am not usually one to jump on socials with anything political but this is going to affect a lot of people, not just musicians,” he shared. “Dave hit me up and asked me did I want to get amongst it and I couldn’t turn it down.

“After all the repping and boasting I have been doing about Canberra, I have to stand up for it. I have been telling everyone that Canberra is on a massive rise and we are going to be the place to be so we can’t let live music die now.”

Bring in Entertainment Zones like they have in the Valley & Paddington in Brisbane.

Rhiannon Craig if I knew this earlier we should have bloody gone!!!

Yeah, they are a couple of decades too late on that. Places like the Terrace bar and the Gypsy bar were shut down because of hotels and apartments being built nearby, although these live music venues had been there for years and years.

Canberras real live music scene died a long while ago because this was allowed to happen.

Denise Bourke - 7 hours ago
More dodgy research on this eh? Like the research on having weed in family backyards? Kids form addictions without parental c... View
Iain Somerville - 12 hours ago
This is not just about the right to choose to die. It is also about Canberrans being classed as lessen citizens by being deni... View
David Newman - 13 hours ago
Linda, exactly. It’s as if the ACT’s and NT’s residents have a lesser right to self determination than residents of the... View
Lifestyle 8

tuggeranongist - 9 hours ago
All things being equal, I would prefer to deal with a large institutional landlord than an individual one. I suspect many oth... View
Redgum - 10 hours ago
Better Renting is correct on one point only. The decision to invest in a rental property is a business decision. Investments... View
Community 27

James Forge - 9 hours ago
Ben Oostermeyer I agree. The usual excuses of transport costs and lack of competition don't wash when fuel that has to travel... View
News 10

kenbehrens - 10 hours ago
Government charges contribute towards the high cost of rent in Canberra. It's Government policy to increase Rates, to a level... View
Geoffrey Bell - 13 hours ago
Mandy Truman $206 cheapest share place i could find. https://www.allhomes.com.au/share/search?region=canberra-act&district=gr... View
Mandy Truman - 13 hours ago
I'm full time uni and I got made redundant from my job and then got a casual job but haven't had work for 10 weeks. I would h... View
News 246