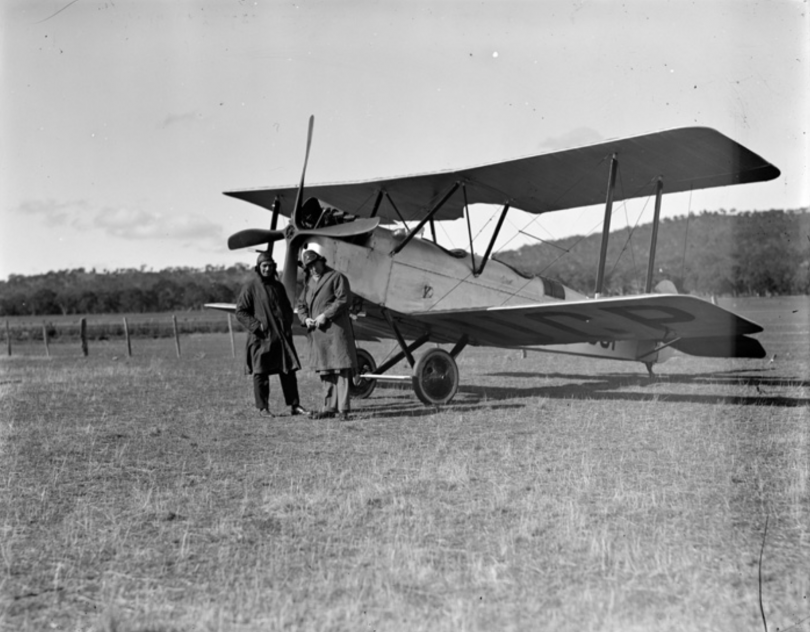 The Aerodrome at Dickson is a site many Canberrans have forgotten about. Photo: File.

Think you know everything there is to know about the nation’s capital?

Few Canberrans are aware that the city’s first aerodrome site, as envisaged in Water Burley Griffin’s final blueprint of the city, was the area now taken up by Dickson shops, library and wetlands.

Canberra’s original aerodrome was in operation from 1924 to 1926. It ceased activities just a few months after the capital’s first air fatality when air operations were moved to Majura Valley, the location of the current airport.

With a free exhibition entitled Wings of Dickson – Pioneers, Pilots and the Ploughman, this fascinating part of local history will be on display tomorrow (10 April) for one day only.

It’s part of a larger program of events for the Canberra and Region Heritage Festival.

Hosted by the Dickson Residents Group, never seen before historical artefacts, maps and photographs will be on display. The event will also serve as a commemoration of the legacy of the squadron pilot and aerial photographer killed in Canberra’s tragic crash.

Flying Officer Philip Mackenzie and his observer William Callander had flown from Richmond to complete a reconnaissance mission for town planning when their plane nose-dived and crashed to the ground near the aerodrome, killing both.

President of the Dickson Residents Group Jane Goffman says it was a tragic loss, and these young men’s service to the capital is deserving of remembrance.

The event will also honour the “exceptional bravery of local ploughman Walter Johnson in the face of a blazing wreck of a plane”, she says.

Mr Johnson was working near the crash site and ran immediately to the wreckage where he attempted a dangerous rescue effort with his bare hands. He was awarded a national bravery award for his service.

It is part of a broader push to recognise Canberra’s aviation history and the important role the aerodrome and those who worked there played.

Its operations were instrumental in the early days of planning and developing the capital, particularly in enabling RAAF aerial photography.

It also hosted civilian biplanes and supported the first commercial passenger flights to the nation’s capital.

“Embracing our shared past paves the way for a new and stronger future, one that respects the hopes and dreams of a diverse, inclusive community and its proud links with the Royal Australian Air Force”, Ms Goffman said.

Accompanied by live jazz of the era, several Air Force members will be in attendance, as will Mr Johnson’s great nephew who will speak on the day.

The unveiling ceremony will take place at 10:00 am on Saturday, 10 April on the lawns of the Dickson Baptist Church at 133 Cowper St.

Organisers advise arriving at 9:45 am if you’d like to see the unveiling, and morning tea will be held after the ceremonial event. It will run until 4:00 pm.

The event will be opened by the ACT Minister for Heritage Rebecca Vassarotti, and two new Canberra Tracks heritage signs will be unveiled to mark the occasion.

Chris Coleman - 4 minutes ago
Graham Wilson If only we had something to celebrate... View
Food & Wine 2

Daniel O'Connell - 47 minutes ago
Sean Kinmonth Our costs are increasing due to ACT's contracted prices for 100 percent renewables being greater than electrici... View
Sean Kinmonth - 3 hours ago
Seems to me that coal and gas are getting lots of subsidies as well. Renewables are cheaper and better for the environment. View
Sean Kinmonth - 3 hours ago
I thought the ACT had the second cheapest supply due to 100% renewables. Only Tassie had cheaper due to hydro. From what I re... View
Breaking 4

HiddenDragon - 2 hours ago
Why stop with repatriation flights? The logical conclusion to the economies of scale argument (which is equally relevant to j... View
Capital Retro - 5 hours ago
Forget the "the significant costs and operational requirements associated with the program." being the reasons. The risk is u... View
ChrisinTurner - 6 hours ago
It is amazing how the number wishing to return home has remained constant despite over 100,000 returns. View
Sport 4

chewy14 - 6 hours ago
The solution to this is simple. Instead of building more public housing, the government should divest itself of almost all of... View
Food & Wine 2

Gassed - 7 hours ago
Shame I thought they were going to sell actual chilli's not just sauces... View
Brisal - 12 hours ago
I can't wait to check out the new store! View
Food & Wine 50

Ol L - 8 hours ago
Buying to rent out doesn’t make sense in Canberra. The government costs make for a poor investment, however across the bord... View
Property 3

Nat Smith - 12 hours ago
I know people that are waiting for two bedroom houses for 7 years . They have not replaced civic Kingston or narrabundah apar... View
show more show less
*Results are based on activity within last 7 days

A father allegedly hit his 16-year-old son in the back of the head before threatening to slit his throat after...

@The_RiotACT @The_RiotACT
When did you last eat a toasted sandwich? Melted Toasted Sandwich Emporium in #Fyshwick is giving the humble classic the gourmet treatment. https://t.co/oxLZ0vYp71 (47 minutes ago)

@The_RiotACT @The_RiotACT
Soak in the village lifestyle - including the magnificent array of local wineries - so close to the city, yet so far away from it all! https://t.co/CtgfRaypTY (2 hours ago)

@The_RiotACT @The_RiotACT
Music festival organisers are chafing at the ACT's continuing COVID-19 limits on live performances and the uncertainty they face trying to plan and stage events https://t.co/rSXG3xdIXs (3 hours ago)