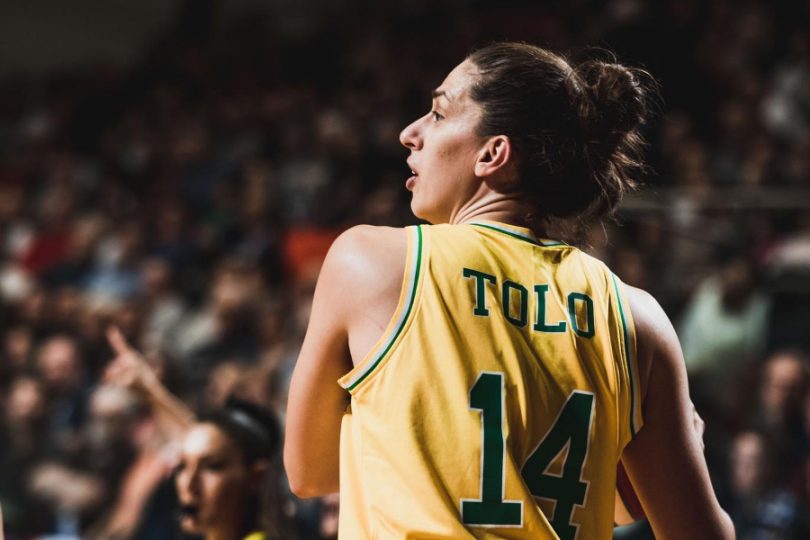 Marianna Tolo will be playing her 200th game in the WNBL this Sunday night at AIS Arena. Photo: UC Capitals.

The UC Capitals will be playing with an extra sense of urgency this Sunday (February 16) as Marianna Tolo marks her 200th WNBL appearance when the Capitals host the Melbourne Boomers at AIS Arena in game one of the semi-finals.

The 30-year-old will hit the landmark less than a week after helping the Australian Opals secure an Olympic berth with an 86-72 win over Brazil.

Tolo has enjoyed a solid season at centre for the Caps, averaging 14.4 points per game, 8.1 rebounds and 2.1 assists, while shooting a very efficient 52.5 per cent from the field.

“She has been a leader and a captain for a championship-winning team and I know she will be fired up for this season, but also about her milestone of 200, which is really special to her. I know she is excited to be back here at the Capitals, but also about that milestone as well.”

Momentum is certainly with the defending champions, having won five-straight games heading into the postseason and despite having nearly two weeks off from the court, forward Keeley Froling believes the team has hit form at the right time.

“We had a lot of momentum coming into last year and I think that we are peaking at the right time,” Froling said.

“We finally have our whole group back together after a really up and down season, so we know what we can do and how we have to win this game. Obviously, we know it’s not going to come easy, but we are ready.

“I think for us it’s all about defence. We know that they can score and score a lot but our focus is getting defensive stops.”

While Tolo has had a massive influence on the court with three WNBL championships already bagged, her impact in preparing the next generation and as a teammate speaks volumes throughout the squad.

“She’s such a great leader, on the court and off the court as well with how she conducts herself, she works really hard, but she’s also a great person,” Froling said.

“Tolo is really like that mother figure, you can go to her for anything and she will listen.”

Get your tickets from Ticketek.

franky22 - 28 minutes ago
All pollies want electoral reform that will favour their particular demographic. View
Acton - 1 hour ago
If the Greens think that lowering the voting age to 16 will result in more Green votes, they may be very disappointed. There... View
Community 2

Renee Mae - 43 minutes ago
Yes there are root causes but especially here in ACT we can't ignore rental affordability (or lack thereof). So many women ar... View
Property 25

Acton - 55 minutes ago
Certainly low documentation loans raise the risk of default. As well, to add to the risk factors now are greater use of mortg... View
Capital Retro - 3 hours ago
It is timely to revisit what happened in the USA 11 years ago because with speculation that there will be government guarante... View
Acton - 3 hours ago
Low interest rates mean people borrow more. Large loans means people have more money to spend and higher buyer demand pushs u... View
News 4

@The_RiotACT @The_RiotACT
The derelict Commercial Hotel in #Yass is under new management, as the major shareholder of Public bar in #Manuka takes over https://t.co/ss9NhiJQLa (12 minutes ago)