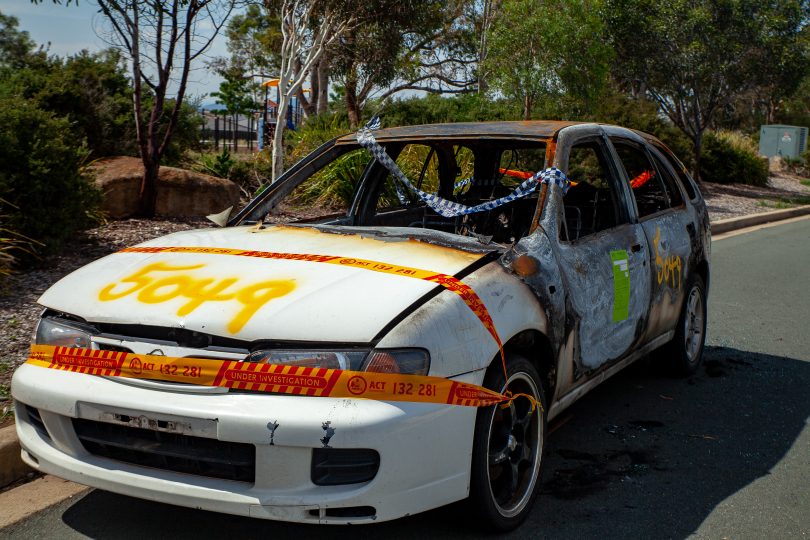 The shell of a car set alight on 21 December on John Crawford Crescent in Casey. Photos: George Tsotsos

A researcher has warned there may be many reasons behind the spate of car fires across Canberra, ranging from bored kids looking for a thrill to criminal gangs competing against each other, as Canberra’s summer of car fires rolls into the new year.

During the first seven days of 2019, eight more cars were torched across Canberra, adding to the staggering count of 56 burnt out cars last month. So far this year, firefighters have put out car fires in Pearce, Giralang, Hughes, Lyneham, Majura, Red Hill, Phillip and Scullin.

Police are baffled by the increase in car fires and are unable to say why there have been so many vehicles set on fire and if any investigations are under way.

But what drives someone to steal a car and torch it a short time later? Is it a group of bored teens with a passion for arson, or people looking for a quick way to claim car insurance? Or is there a group stealing cars and selling parts before torching the remnants?

Australian Institute of Criminology Research Manager Matthew Willis said pyromania and a pathological fascination with fire were unlikely reasons for the spike, as the disorder is rare and did not explain the extraordinary increase in the number of car fires.

“You also can’t rule out insurance fraud but when there does seem to be a spike in car fires, you have to look at different reasons going on, including copycats or even potentially gang-related. There might be a larger group of people doing this and in that case, they might be doing it as a gang initiation or potentially competing with each other in a really perverse game.” 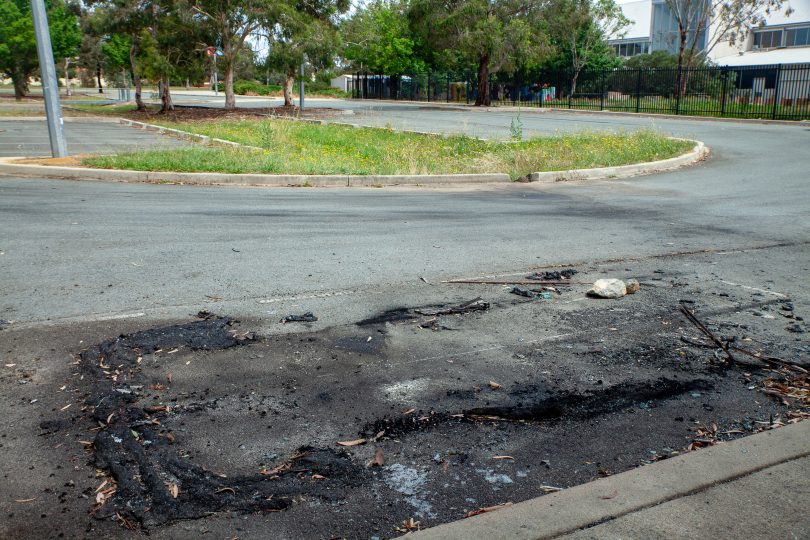 The burnt remains from a car fire at Gold Creek School on Christmas Day.

Mr Willis generally expects an increase in fires heading into December and January but admits this season has surprised him.

“In my work with bushfires, we certainly know that once school holidays come around with a long, hot summer, there is an increase in fires,” he said. “We kind of expect an increase of fires in December but not to this scale.

“We have seen up to four car fires in a given day which is a fair bit of activity and movement. That suggests to me that there is more than one person responsible.”

No mention in the article that the main target is N14 and N15 Pulsars?

This says to me that its bored, dumb kids.

Recent releases from juvie or AMC..

Well thanks for telling us exactly nothing about the ‘why?’

It not joy rides. It’s instead of taxis. I have gone past many on the park way and they remind of a colleagues conceptual observation that it was easier and cheaper to steal a car and dump with in walking distance from home. That’s why they are stolen and dumped near the same location/s. The same for stolen bicycles from sheds.

Some I reckon are insurance jobs others are just mischievous

The Kids Needs A Good Kick Up The Ass. & It’s SomeTimes The Parent’s Fault As Well

lazy police is why

Criminologist or not, this is all pure speculation.

They’re setting them off up the hills too. I ride my bike up the Brindies, see these burnt out wrecks, and can’t help but feel they been placed in heavily canopied areas in an attempt to cause firestorm havoc. Makes me grrrr.

Duane Toohey I’ve seen them out that way too.

They are picking easy targets, old cars without immobilizers. So I’d say its bored kids. They seem to take a lot of N15 pulsars. There is no market for used parts for them and the cars would seem to be reasonably intact. So I think we can rule out parts gathering. I’d say its just horrible little turds who need a good kick in the pants.

Bored or not, cars in some parts of Australia are removed in 24 hours. Canberra and the car can be there for a month.

Much like the work on Horse Park Drive, the ACT Govt seems to go AWOL from December to February…

Andrew Tops bro, glad to hear 👌 Was nothin doing before we scarpered.

Was this researcher paid for their work ? it seems a bit generic and the result of 5 minutes googling. Or am I mistaken and perhaps it was simplified for this article ?

I’m also curious about the conjunction ‘Police are baffled by this increase and are unable to say if any investigations are underway’. What is the public expectation here ? Are they obliged to investigate and are turning away from this obligation or are they happy to turn it over to vigilantes who are willing to protect their property ?

“The burnt out car near the entrance to the BBQ area on the western side of Lake G has been there forever.”

I thought that was a government’s public art piece, channelling Belconnen’s culture.

The burnt out car near the entrance to the BBQ area on the western side of Lake G has been there forever. How long before they get collected?

id say kids,,, i noticed at southlands today all the charity bins have been burnt out…. No respect anymore,,,, i put it down to the nancy boys in parliment,,, bring back the cane, teachers need control,,,, bring back the belt if youe kids misbehave,,, i survived it,, like most

Guy Noble be honest with yourself. Are you really happy to be the benchmark for other humans? 😉

Guy Noble so violence over encouragement? I’m not against discipline but striking fear into people doesn’t work dude. Soz

You didnt see 20 burnt out cars and charity bins burnt out when i was a kid,,, wasnt worth the floggin. Kids had a respect

Bored kids find less “fun” things to do, when the justice system comes down hard on them…. AND their parents