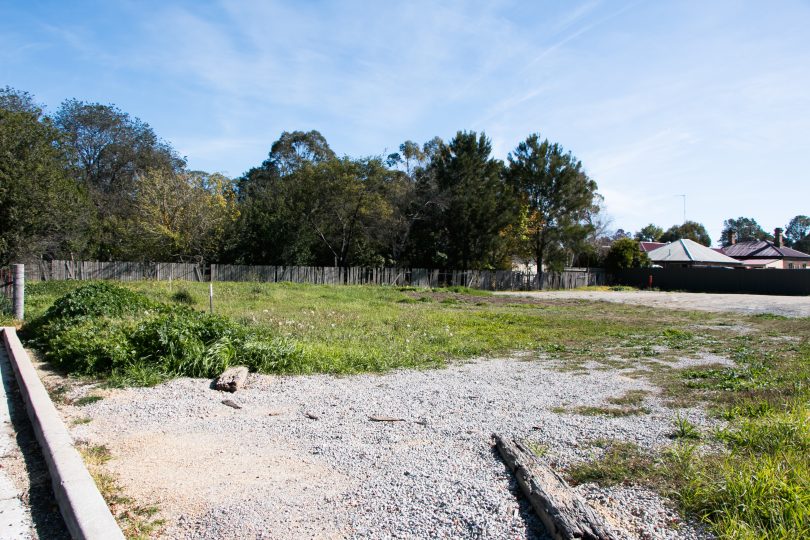 Part of the site off Ellendon St in Bungendore where a car park is proposed. Photo: Supplied.

A car park that doesn’t exist is at the centre of a dispute among residents and business owners in Bungendore.

The car park, which has been earmarked for a site behind Malbon Street (also the Kings Highway) and Butmaroo Street, is also the town’s only green space.

Some residents say they want the green space to be a vibrant community area that links the town’s shopping precincts. Nearby shop owners want a car park so that more people can stay for longer than just a coffee stop.

Queanbeyan-Palerang Regional Council first advertised the car park on 5 August last year, saying that public consultation “will guide us in ensuring that it meets the requirements of the community” and that the design will ensure that the car park can be extended as demand grows.

Some long-time residents say there are plenty of places to park in the town and want the area to become a green space. They also say that the Council has failed to provide enough time for a proper consultation process.

Concerned Bungendore resident Julie Prater made a submission to Council against the car park and told Region Media it is one of many issues facing the town which has grown substantially in the past two years. 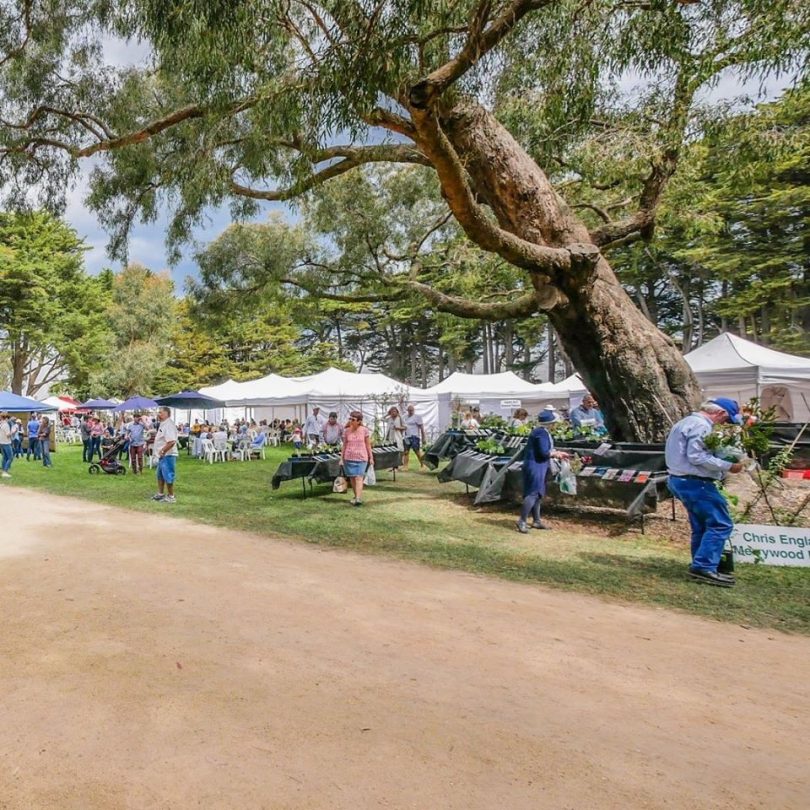 The Bungendore Residents’ Group’s vision a vision of what the village green could look like. Photo: Supplied

However, Mrs Prater said many community members want to keep the green space for markets and other uses.

“We know there are car parking issues in Bungendore, but the Council could do other things than make the area into a car park. If it was a green space, the community could have market space and people could go and sit there and read a book.

“This is not all about people coming through to the coast. It should be what the community wants as well,” Mrs Prater said.

A spokesperson for Queanbeyan-Palerang Regional Council said the project is being divided into two stages and that only the design of the first stage had been completed.

Stage one will include 68 vehicle parking spaces, three accessible (disabled) spaces, electric vehicle charging points, as well as an allowance to connect to 11 additional spaces on private land at the rear of 35 Ellendon St and public toilets.

Stage 2 would include a further 63 spaces.

Both stages would include footpath connections to surrounding streets and infrastructure such as electrical and water connections that could allow the car park to be used for other purposes such as markets.

Council also purchased land in 2007 and 2012 to allow for stage one of the project. The land was zoned as ‘special purpose’ in 2014, which allows a car park to be constructed on the site. Council also owns a right of carriageway for vehicle access through 33 Ellendon Street. 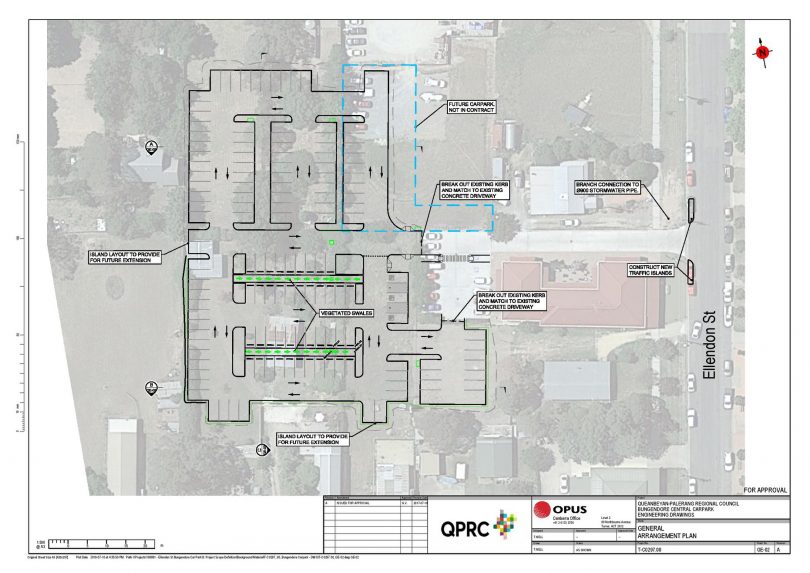 The QPRC spokesperson said 46 comments were received on the proposed design and the majority of submissions were in favour of the car park.

“Council has resolved to proceed to construct the car park following the community consultation.

“The project is part of the 2019/20 delivery plan and Council has not resolved to delay the progress of the car park.

“Council will continue to address concerns raised by the community as the project progresses,” the spokesperson said.

Council also said funds for the car park, which is estimated to cost $2.5 million, have already been allocated from loans in its 2020/21 operational plan.

Council does not yet own the land for stage two, but said rates will not change to meet the loan repayments.

“With many businesses under stress, firstly from the fires, then the COVID restrictions, this development will provide infrastructure that can only help as passing traffic returns,” Mr Riley said in a letter to the editor of the Regional Independent newspaper.

However, Mrs Prater said a 130-space car park is not needed and Council hasn’t properly consulted with locals on what the community wants.

She said the proposal by the Bungendore Residents’ Group is to keep the village green space for functions and community use but also include some car park spaces, which allow for safe passage between the two shopping hubs on Malbon and Gibraltar streets.

“It is the perfect spot to sit and contemplate amongst already established gardens with roses, hedges and old trees,” Mrs Prater said. “It’s something most villages, towns and cities could only dream of, and we could lose before anyone, except council, knows it exists.”

“A 130-space car park would be a tragedy of unrealised potential for a vibrant village.”

It should be known by the community of Bungendore that the submissions made to council regarding the central green space In the centre of Bungendore that Council are intending to bulldoze to make a large Carpark has been a long battle over many years. It has been clearly shown that the submissions are not in favour of this going ahead in its present form. The changes and consultation with the community is ongoing and since the original DA’s there has been much change which highlights as Council have stated in many of their planning reports that Green space for families and the community is lacking. The Green space that is referred to by Sherridan is not in the centre of Bungendore, this land that is in dispute with Council about turning it into a large Carpark is community land that needs further considerations to take on board the concerns and objections that have officially been made to Council. The community do not want $2.5 million spending in this way. Revision to the plans to reduce the Carpark spaces and to save the green space is to be further discussed with the community.

The concept of a village green is nice but unlike the article states the ‘village green’ does not exist and is not Bungendore’s only green space. The carpark has undergone formal community consultation. However QPRC suffers the same as other Councils: the community only engages when confronted with emotive words and images that seek to work against consultation outcomes. I would welcome Bungendore Residents Group (BRG) proactive engagement of the community during the formal consultation process. BRG would benefit from having open forums with the community on planning issues. BRG has contacts with QPRC and it would be great for them to work together. A number of approved developments have fulfilled the car-parking needs by contributing land to the proposed carpark. Another business was given a concession because it was adjacent to the proposed carpark. The carpark is a complex matter.

Karin Foxwell - 2 hours ago
Frank Valzano hear hear! As an Art Therapist working with veterans with PTSD I can only imagine how that sort of money could... View
David Stephens - 4 hours ago
But if your head is in the sand you might come a nasty gutser. Moving on has its drawbacks. View
Smackbang - 8 hours ago
What a coincidence - your opinion is also irrelevant, and yet here you are offering it. View
News 28

David Riddell - 3 hours ago
Marea Fatseas possibly. CRS website statement back in 2018 references Canberra only. Even if importing from NSW I imagine it... View
Capital Retro - 3 hours ago
Maria Fatseas says "Fyshwick would become the destination for a huge amount of NSW waste." You should be aware that the MLRMC... View
Marea Fatseas - 4 hours ago
David Riddell the waste normally going to landfill in Mugga Lane wouldn’t be enough to meet the proposed CRS target of 300,... View
News 7

PaulWalshe1 - 5 hours ago
Great article Tim, it was a special day for AFL in Canberra. The ACT had only 3 VFL players - Jezza, Ian Low and Queanbeyan's... View
Business 20

Capital Retro - 6 hours ago
I don't know who is going to read it then JC. I suppose the hardcore lefties and self-appointed experts who contribute almost... View
JC - 19 hours ago
The paper is still going to be made. View
Rebecca Hosking - 22 hours ago
Jane Larkin Naomi Feuerherdt Kim Beaumont This is a bit sad 😥 Remember our team photos on the massive reams of paper 😊... View
News 29

@The_RiotACT @The_RiotACT
This month marks the 40th anniversary of women’s involvement in active surf lifesaving duties, but the movement wasn’t always so supportive of women in the ranks, writes Kim Treasure https://t.co/fak8XGxE55 (1 hour ago)

@The_RiotACT @The_RiotACT
The owner of two distinctive office buildings in City West plans a $4.7 million revitalisation for the precinct, with the centrepiece being a new pedestrian plaza connecting them https://t.co/wJkzDPrrJl (4 hours ago)