Commonwealth Park’s Stage 88 was the venue today for one of the first paid festivals in a long time in this town. Kerces and I went to assuage her strange addiction to the Cat Empire who were headlining the day. 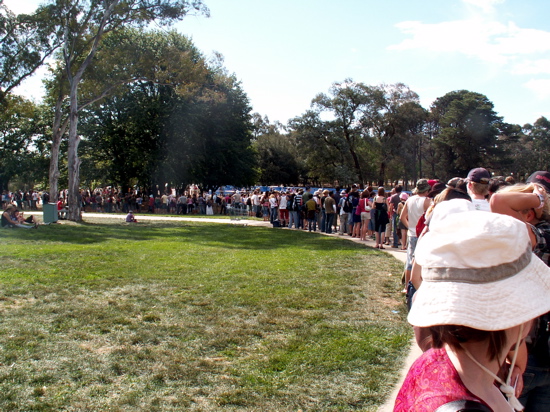 And here’s a video of the way the line looped around Regatta Point (bonus points for whoever can spot me in the line and tell me what colour t-shirt i’m wearing).

According to scuttlebutt in the park there had been trouble getting the moshtix, a credit card used to store your ticket, to talk to their machines and actually prove that people had paid to come in. There remains something to be said for a bit of paper. 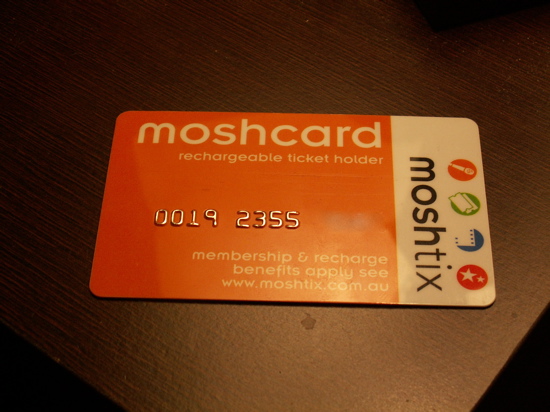 After about 45 minutes we had finally advanced to the point where we were allowed to queue in a cage before having our tix swiped, our bags inspected, our ID verified, and an appropriate tag wrapped around our wrists to enable us to buy alcohol.

Many people gave up and went home when they saw the line, despite having paid over $35 a ticket.

Once we had made it inside however things were actually extremely pleasant. 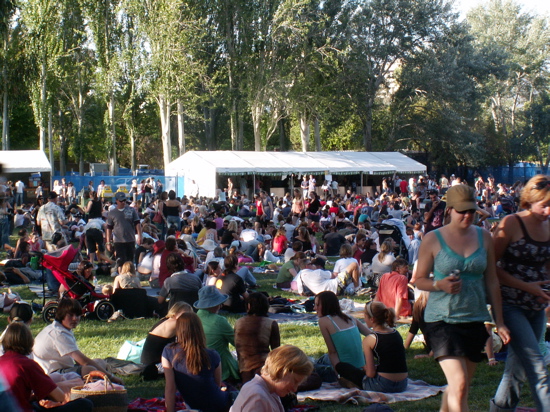 While there were lengthy queues for the better food, and an enourmous line for the ice cream, that’s normal for festivals, and you could see the stage and hear well from the lines so no real harm done.

A little surprisingly there was never a major line for beer. Partly this was probably because of the youth of the crowd, and partly I suspect because the Cat Empire fans aren’t the boozers you might expect at a different band’s show.

The organisation inside was in striking contrast to the huge delays getting inside.

A very good natured crowd sprawled out on the grass, enjoyed the music on a glorious summer afternoon, and had a grand old time listening to the support acts Blue King Brown and Tortured Soul.

Despite the vigorous bag searching, however, the youth of Canberra are not to be deterred from their booze smuggling. A group in front of us had managed to get a couple of goonbags inside and got themselves stunningly pissed to the point one of them had to be carried out by late afternoon which brought security down on them like a tonne of bricks leading to all sorts of entertaining shenanigans. They finally got booted out while Cat Empire were playing their encore.

With apologies for the blurring caused by the low light here’s a shot of the crowd very happy crowd all up and dancing to Cat Empire as the show came to an end. 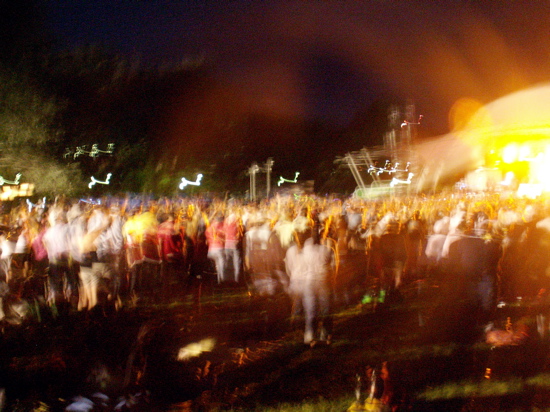 As far as I can tell the event was a great success. I hope we get a few more shows like this in future, one can only assume the technology will work better with repeated use.

I’m from Sydney and Moshtix is very popular up here and it works very well as far as I’ve seen, with shows MUCH bigger than that one. In Sydney there are multiple concerts of that size WEEKLY that use the moshtix system and they work flawlessly and fast.

Perhaps people should really think about the logistics of the event before blaming one particular aspect of the entry. How on earth could 2 bag searchers and 2 people putting wristbands on EVERY patron possibly be slower than swiping a card? Its not.

Big events like that in Sydney have about 6 entry lanes for bag searches and wristbanding – not 2. YOu don’t check ID at the wristband area anyway, you give everyone the same entry wristband and then give over 18 patrons a special wristband from another guard inside or near a bar… IF you need to search everyones bags, you need plenty of security guards for that, that takes the time, as does wristbanding.

THe other thing that slows it down is when people book tickets using someone elses credit card, or forget what card they use and then the poor guys have to search through records to find booking history to find the tickets, because people cant read the details on the moshtix site that specifies that the credit card must be present at the event to gain entry, OR print out the provided credit card authorisation form…

Anyway next time will be better I’m sure the organisers will have a better entry system next time, with more lanes and bag searches and a better wristbanding setup…

Probably because “hchello” looks impossible to pronounce, sns. Or maybe you meant “hic!hello”?

…but the worst thing was the number of desperados using the cheezy line “hchello hchello” on anyone female. I lost count after five because my other hand was busy holding beer. To be honest I would have followed their example, but it didn’t seem to meet much success.

I think they were just understaffed. When we got to the front of the checkpoint, we got straight through.

thats crazy. I would have been pissed off. I have used moshtix up in sydney before and they seemed to work well.. I wonder if they had actually tested it before using it for something so large.

Certainly a great number of people missed a lot of the supports.

We didn’t turn up until an hour after the show was meant to start and still had to queue for 45 mins.

did you miss any of the show because of the line?

What a debacle that line was. Must have been waiting for 30 minutes to get in.

close, but not quite there RG.

Arrgh, how did I miss this? I need to get someone to drop some BMA’s out to Brindabella Business Park. :/

Stephen Dixon-Jain - 7 hours ago
Thanks for the suggestion, Julie. I've just adourned our letter box with the colours of the Aboriginal flag. Stephen View
Julie Macklin - 8 hours ago
People crowded together. Unbelievably irresponsible. There are other ways to make the point, and a more permanent point to re... View
Community 14

@The_RiotACT @The_RiotACT
For Our Country, the Australian War Memorial’s Aboriginal and Torres Strait Islander memorial, has taken out the top gong at the ACT Architecture Awards on Friday night, winning the prestigious Canberra Medallion. See all the winners https://t.co/dKch27SZqs (53 minutes ago)