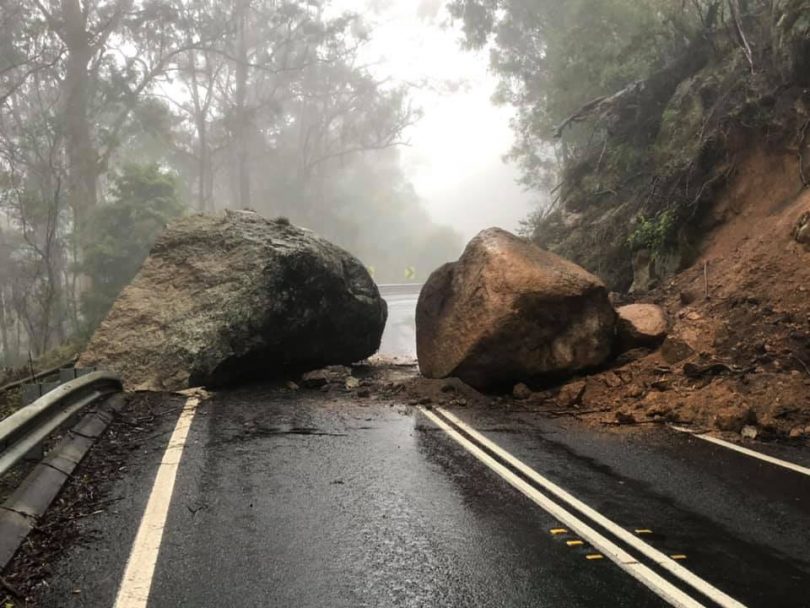 Two large boulders that blocked the Snowy Mountains Highway west of Bemboka have been turned to rubble after a rock-blasting company was brought in to ensure traffic could roll again.

Motorists travelling on the Brown Mountain had been caught between a rock and a hard place when two giant granite rocks fell during heavy rain on Saturday afternoon, blocking both lanes and closing the highway for about 24 hours.

The two boulders, weighing about 40 and 80 tonnes, were blasted by Jindabyne-based drill and blast company Rock Breaking Solutions, which used low impact cartridges to safely break the rocks into manageable pieces.

The job was deemed too risky to complete on Saturday, so crews returned on Sunday to literally have a blast.

The guard rail was heavily damaged by one of the boulders, while the explosion further destroyed it.

The rock-blasting company said it used a pressurised capsule to break stone and concrete. The technique is used in environmentally sensitive areas.

A wheel-mounted, remote-controlled drill rig was used to make a hole in the large granite rock before a low-pressure cartridge was placed inside.

Transport NSW said the remaining debris was transported to one of its existing stockpile sites.

A number of other sites on Brown Mountain were also inspected by geotechnical experts before the road was reopened.

A spokesperson said Transport NSW does regular inspections on the highway at Brown Mountain and is planning a number of slope stabilisation projects in the next three to five years.

The Bega Valley branch of the NSW State Emergency Service has also been working to clear roads across the region.

“Between the damage caused by bushfires and now flooding rains, some of our amazing south coast landscape will take many years to recover.

The pictures of these rocks all look like PhotoShop jobs but I know that they are not.

Andrea Mya Riboust - 38 minutes ago
Matt the former I assure you 😄 View
The Martini Whisperer - 3 hours ago
Lucky they’re weren’t in Texas. View
HiddenDragon - 5 hours ago
So the Big Merino will be the command HQ for Gilead Down Under - and they said it couldn't happen here......... View
Food & Wine 12