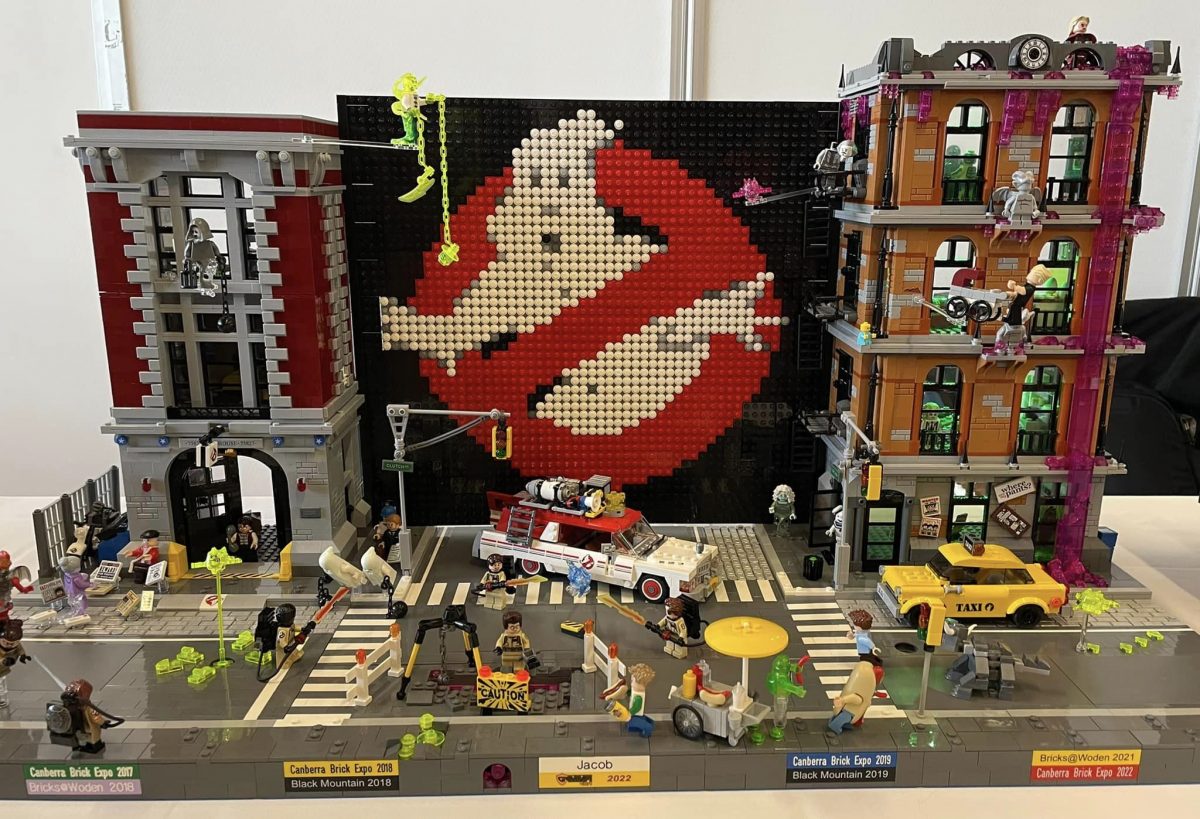 One of many dioramas coming to the new Brick Show. Photo: Canberra LEGO User Group (CLUG).

Did you know the diameter of one of the studs on a LEGO brick measures exactly 0.1932 inches?

It’s the same year Ole Kirk Christiansen began crafting wooden toys in his shed in Billund, Denmark. It was a move that birthed the genius of the ‘Automatic Binding Brick’ that has gone on to take the world by storm as ‘LEGO’. And not just among those under the age of 12.

The ever-popular cross-generational toy turns 90 this year and Canberra isn’t letting the occasion go by without a celebration: 2022 marks the arrival of the inaugural Canberra Brick Show.

Yes, from 2010, we hosted the Brick Expo at The Hellenic Club and Southern Cross Club in Woden. This drew crowds to see hundreds of static, moving and robotic LEGO creations and raised over half a million dollars for the Canberra Hospital Foundation. But this inexplicably wrapped up in April 2022.

The Canberra LEGO User Group (CLUG) has lost no time filling the void with a new-format Brick Show at Thoroughbred Park from 19 to 20 November.

CLUG president Jake Radloff says the focus is more on the family than ‘Adult Fans Of LEGO’, or AFOL.

“LEGO shows around the country tend to focus on the AFOLs, but this one is really aimed at families, so parents and kids can enjoy all the exhibits.”

CLUG has a local membership of over 175 adults and juniors, ranging from age four to seniors, with a mission “to provide the LEGO community in Canberra and surrounds with a fun and inclusive environment to share their passion”. The club also works with a number of local schools and charities on various fund-raising activities. 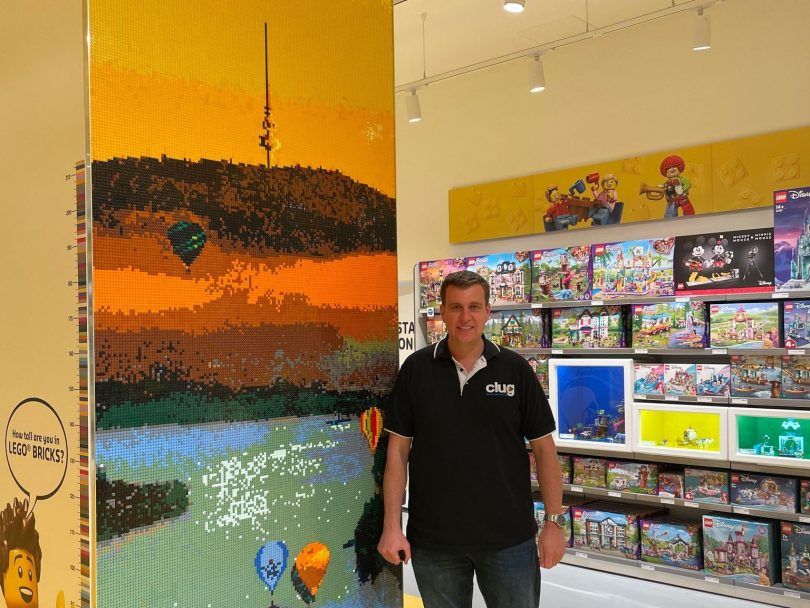 CLUG’s Jake Radloff next to the mosaic which features thousands of individual blocks. Photo: Jake Radloff.

Jake says the show pools the creations of these members and those belonging to more than 50 people from Sydney, Melbourne, Brisbane and Adelaide.

“With over a hundred local and interstate exhibitors, the show promises to provide interesting and creative LEGO displays for all ages,” he says.

Tables upon tables will be taken up with classic large-scale dioramas of the City, Space, Friends, Star Wars and Viking themes, spanning generations of sets.

“Some of our members have collections that go back to the 1970s and ’80s, so people can reminisce about what they had as kids, or what they always wanted as kids,” Jake says.

Other highlights include “one of the largest LEGO train layouts Canberra has ever seen”, with more than 100 metres of track carrying a mix of steam and diesel locomotives and rolling stock.

Then there are the Technic vehicles, from supercars, trucks and custom variations of popular sets, many of them motorised. And there’s a section devoted to LEGO mosaics – artworks formed by putting together thousands of single-stud bricks.

There’s also what Jake describes as a ‘Great Ball Contraption’.

“Basically, it’s a whole series of LEGO motors with thousands of small LEGO balls orbiting around them in different directions. It’s fascinating to watch.” 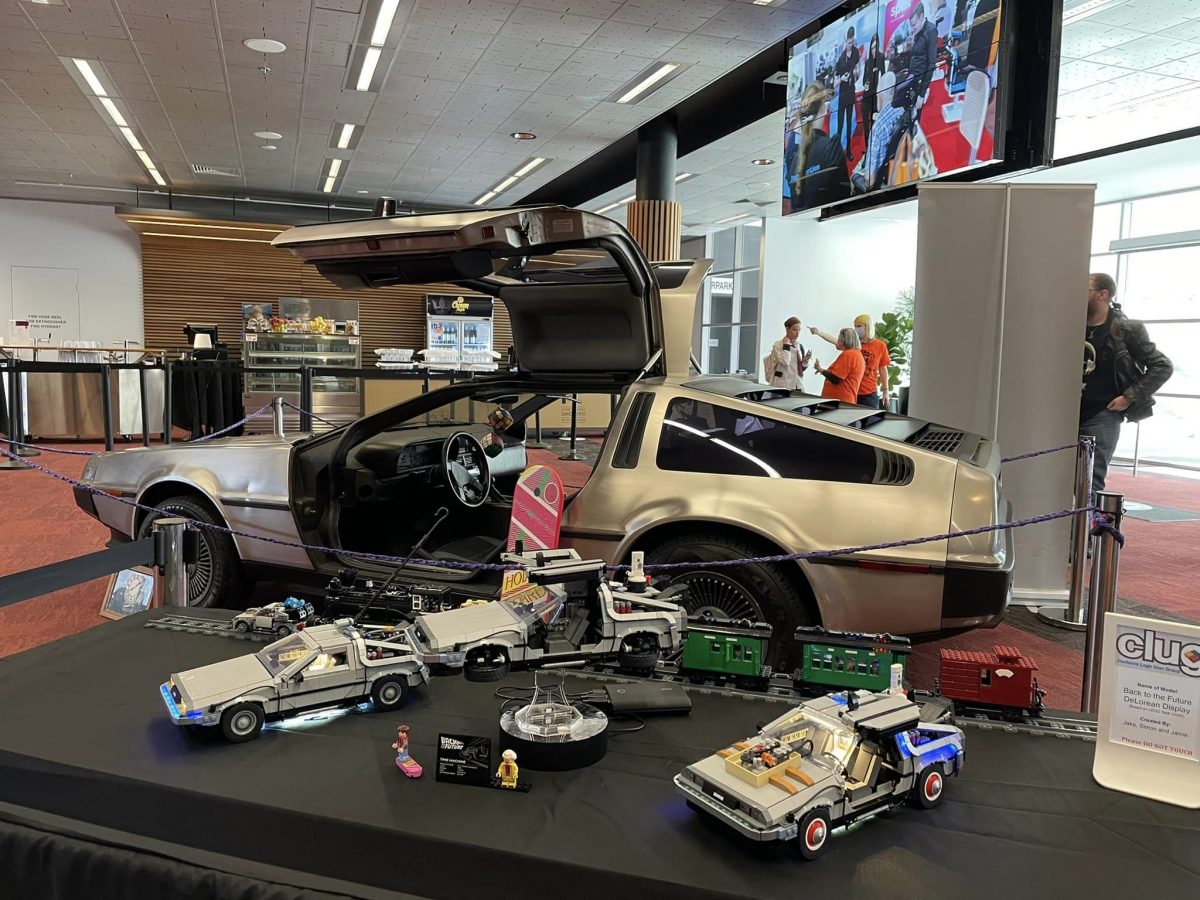 The show will include a real-life DeLorean. Photo: Canberra LEGO User Group (CLUG).

Attendees will have the chance to build their creations in a dedicated play area or take photos with Canberra’s Star Wars cosplay group, 501st Legion. The star car from the Back to the Future trilogy, a DeLorean DMC-12, will also be on display.

Vendors will also be on-site with new, used and retired sets available for purchase, along with other merchandise, mini-figures and used parts.

A variety of food and drinks will be on offer throughout the weekend.

Saturday evening will feature a ticketed VIP night for those 18 years old and above, for those looking to get up closer to the displays and chat with their builders over food and drink.

Like many, Jake has loved LEGO since he was gifted his first Duplo set as a child.

“I was probably about four or five years old when I got my first LEGO train set, and I still have it today.”

He moved away from it as he passed through his 20s but returned to it when his own kids – and more by way of finances – arrived.

“For me, it’s quite relaxing. Especially after a busy or stressful day at the office, I can just sit down with a bit of LEGO and change my focus.”

He says LEGO has enjoyed a big comeback in the last 10 years, helped by new product lines, The LEGO Movie film franchise, and a growing desire among parents to get kids away from screens and doing something with their hands.

“They really started focusing on families rather than just discrete groups, and it’s paid off.”

Here’s to another 90 years.

Jamie Webster Leo would love this!!

Belinda Reilly sounds like a family outing for your crew 😄!

$12 each for everyone over 3 and you’re only allowed in for an hour? Yeah, Nah….

Kirsty Smith – check out the website for ticketing information. Times listed are entry windows, so if you buy a ticket for 10-11am for example you could stay until 5pm close 👍

Jake Radloff ok, thanks, i did have a look and I obvious misunderstood what the website meant

Kirsty Smith no problem 🙂 hope you enjoy the show! Tickets are selling fast.