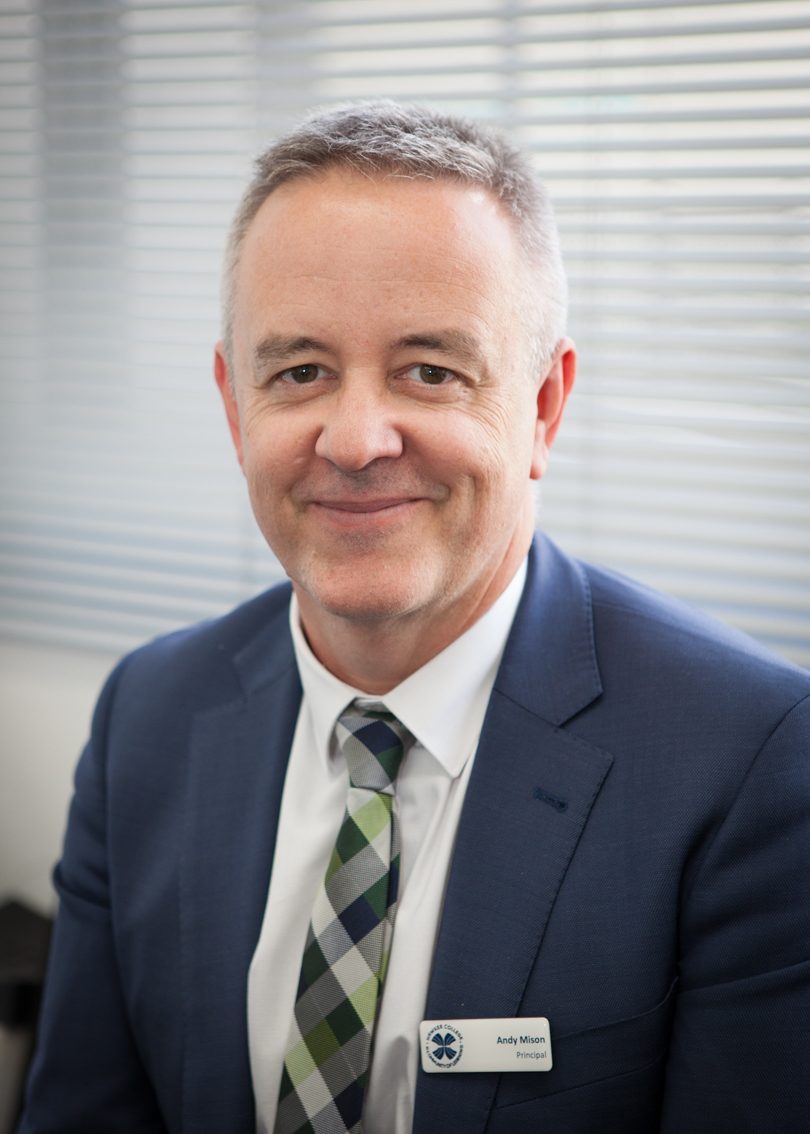 ‘Effusive and inspirational’ are the words that I would use to describe Andy Mison, Principal of Hawker College. So passionate is he, about the kind of education they are creating at this school, that I left the interview wishing I was 16 again and attending this school for my final years of secondary education.

“I’m incredibly fortunate to be Principal here, as our 500 students are amazing; they look after each other and they get involved. The expertise of the staff is second to none and the whole school community pulls together to provide such an excellent education that I am proud and humbled to be a part of it all,” Andy tells me.

It doesn’t take long to work out that this man is a mover and a shaker, either. When he was in the NT, he was executive producer of a program called ‘The Beat’, something akin to the Limelight shows, supporting and showcasing the performing arts in Northern Territory schools. He is also very proud of his legacy in starting a multimedia platform for indigenous students called Vamp TV, because that show, produced by the students, is now up to its 100th episode.

But the ACT opportunity called him, and as his wife was from Melbourne, he was from Sydney, and they both wanted to be with family at a time when their parents were elderly. So, Canberra was their obvious choice – and aren’t we lucky!

Andy’s philosophy of education is both progressive and insightful.

“At a time when students can access content through YouTube or the Khan Academy, our teachers need to become expert pedagogues and facilitators. They need to have a growth mindset and not be afraid to lead by example, demonstrating to their students that they are active, passionate learners themselves.”

Along with the notion of teachers as facilitators, efforts to build the collective efficacy of the teaching team also underpin education at Hawker College, and Andy says that:

“We have the resources, the technology, and the skilled staff to do the best we can to prepare our students for an uncertain future. There is curriculum to learn, but we must balance this with skills and character development, as well as the explicit teaching of their meta-cognitive skills: students’ ability to learn how to learn. We can support that by providing authentic learning experiences.”

And what a plethora of authentic experiences these students are accessing at this college!

In terms of agriculture, the students are encouraged to study the science of the future in agriculture, so that they can be prepared for it. The school has invested in an ‘Agribot’, which sits over a block of land and takes care of the seeding and irrigation, responding to data collected by sensors. A sustainability group of students (they call GAIA) came together last year, working with Greening Australia to develop a bush regeneration program. They held ‘Hawker Tree Day’, where they were gifted 200 native plants from Greening Australia to plant on a slope that had been fallow, and the idea was about rebuilding bio-diversity by bringing native species back to our local environment.

‘Maker Space’ sections of the school allow students to use their creativity in Engineering, Mechatronics, Electronics, Robotics, Design Technology, Furniture Construction, Metal Work and IT. (Last year, two of the students built a 1980s-style arcade game, and a number of others won the prestigious CIT ‘Bridge Challenge’ competition.) The math program is amazing. On his first day at Hawker, Andy had a student show him around. She was given the choice to take him anywhere in the college. This student chose the maths area to go to first up, and she told him that she used to hate maths in high school, but loved it so much now. For maths, they use a blended learning model; a traditional lecture on Mondays, and then a ‘learning brief’ given to the students, comprising exercises and real-world problems to solve for the rest of the week, with a fully-manned, flexible drop-in centre, where they can get one-on-one help from the dedicated maths team. Students results have been steadily improving, along with an increased uptake of maths subjects. 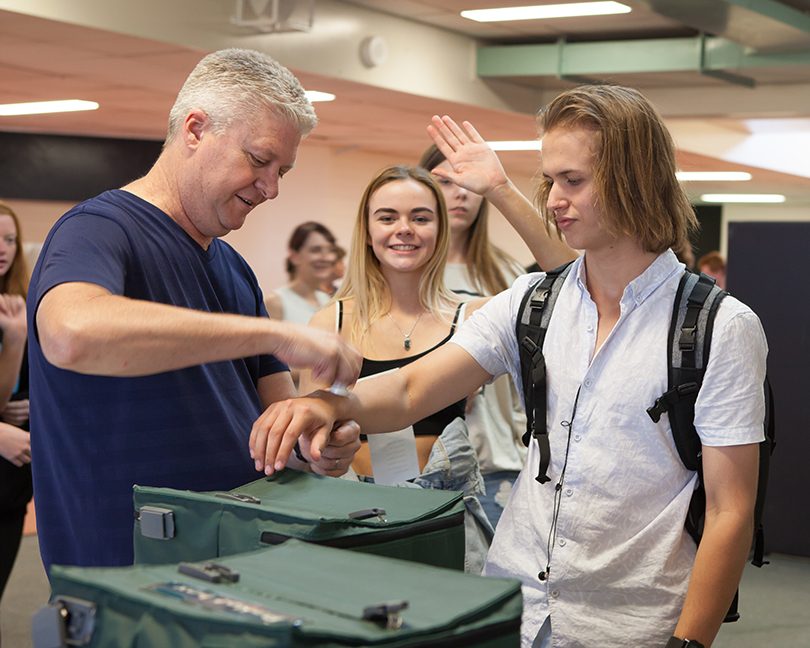 But my favourite story was about the student representative elections they had just held. Students were able to actively learn how to participate in a 21st Century democracy to run their student representative Council elections. With the help of Elections ACT, they set up a Hare-Clark electoral system, fully functional with ballot boxes and student campaigns, abiding by the rules that the system imposes. Voting was not compulsory, but they achieved a 75% majority of students who voted. Two of the representatives were indigenous and also, special interest groups in the school each had a representative, (Like the sustainability group, GAIA, a sports leadership group and a learning diversity group).

And then they had the obligatory Democracy sausage afterward. What’s an Aussie election without snags?

Andy was quick to point out that in the media, we hear many negative narratives, such as mental health issues, plunging NAPLAN results, etc. It’s time that we heard about these positive initiatives so many schools are taking. And I agreed wholeheartedly, as of course, this is precisely what this column is about.

One of the broader initiatives that Andy and the team at Hawker College have put into place, is the Arts and Technology Festival coming up in May this year. It’s about building partnerships with other schools in the cluster, involving many highs schools and primary schools and enhancing student opportunities and pathways. This looks like building another legacy project, not unlike what he left for the Northern Territory.

“But we couldn’t do all this without the brilliant, dedicated teachers on my staff,” Andy adds. Asked about the future, he says, “We will build upon what we have already, maintaining a happy, collaborative and productive school culture.”

I asked Andy what are the biggest challenges we face in education today. His response? “It’s a question of our priorities. It takes a village to raise a child and families face increasing financial and work/life balance pressures. So, it’s time we asked those hard questions of ourselves as a society. What do we want for our children? What kind of society do we want to live in?”

If we can have principals like Andy steering the education of our students, we are indeed in good hands.

My daughter started at Hawker College this year after deciding to leave a private college. We couldn’t be happier. I have got to meet Andy on several occasions at the school and have beem impressed. This article has given me more insight into his background and philosophy on education. The future looks bright for my daughter.

Thanks for sharing that Trish – yes, I was immensely impressed with Andy – and we all know that the quality of our schools is mostly about the staff and starts at the top! So, your daughter is indeed in good hands.

Kriso Hadskini - 3 hours ago
If they would just let go of the 1990's living in the U.K rule my husband and I would regularly donate. View
Opinion 37

John Vallance - 16 hours ago
Lucas Anasdow um.... because like all vaccines it goes through testing. once testing and trials and results are reviewed then... View
News 2

Brent Carlisle - 18 hours ago
I was shearing in the 1980’s and we where talking about how bad the conditions where then and nothing has really changed. View
James Tartarus-Gibson - 18 hours ago
Patrick Honeysett you and I will get a kick out of this 🤣 View
Property 15

Some plots of land are best used by harnessing the powers of an architect to maximise the best views and...
News 2

Dangerous working conditions, poor pay and old, dirty living quarters are causing shearers to leave the wool industry. Farmers have...
*Results are based on activity within last 7 days

Narrabundah College’s future in the hands of the community

@The_RiotACT @The_RiotACT
The sale of NFF House for $7.7 million reflects the high demand for quality commercial properties, especially in the Parliamentary Triangle https://t.co/C8vWUd1szQ (2 hours ago)

@The_RiotACT @The_RiotACT
The ACT is expanding vaccine storage facilities at the Canberra Hospital in preparation for the arrival of the Pfizer COVID-19 vaccine https://t.co/GdyfQLw7tE (2 hours ago)

@The_RiotACT @The_RiotACT
Robert Johnson has marked an incredible milestone - 750 blood donations. Here's why he makes the seven-hour trip from Bermagui to the ACT to donate https://t.co/IgcigUwwps (3 hours ago)