Experts in buying, selling & renting
Your property, your future
18 June 2020 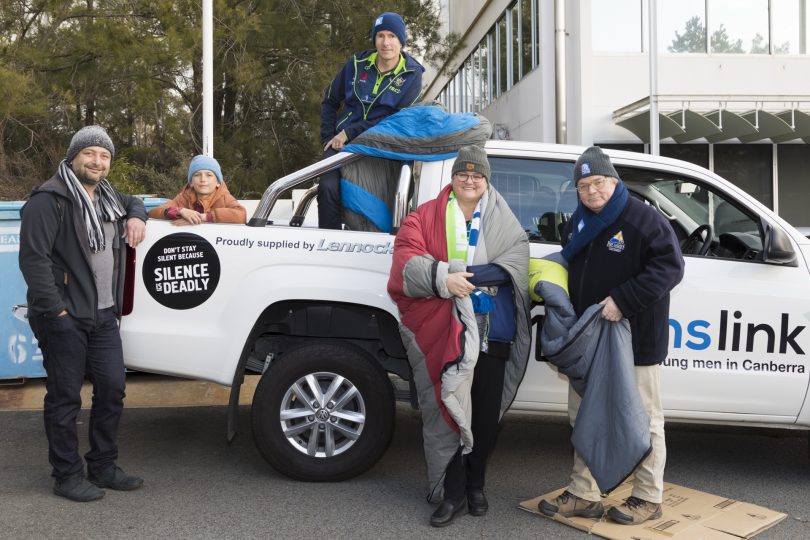 Kamy and Zak Saeedi, Martin Fisk, Katrina Fanning and Neville Tompkins are among the CEOs who are sleeping out tonight. Photo: Michelle Kroll.

Homelessness is more than not having a roof over your head. It’s about not knowing where you can have a shower, or keep your clothes or even find your next meal. And at this time of year in Canberra, it can be about being very, very cold.

Each year the CEO Sleepout puts successful business and social leaders in that position for just one night, raising funds for Vinnies and their outreach work. This year’s event has been affected by COVID-19: rather than gathering together, the CEOs will choose where to sleep and they’ve been able to involve their families for the first time

The ACT’s Australian of the Year is Katrina Fanning. She’ll be bundled up in her sleeping bag tonight, somewhere next to the chook shed, and she points to the rolling consequences of homelessness as her major motivation.

“How do you go to school, get through your lessons without a good night’s sleep and a meal in your stomach? How do you maintain a job if you’re unable to wash your clothes and maintain some of those other routines we all take for granted?

“The multiplying effect of having nowhere safe to stay is that your connection to community and family is compromised”.

The ACT Government’s Specialist Homelessness Services unit says that around 1000 of these people were actually homeless, while the remainder were in precarious situations and at an urgent risk of losing their homes.

“Being able to help services providing the first steps in the pathways to permanent housing is critical for any of those other things to have an impact,” Katrina says.

Kamy Saeedi from Kamy Saeedi Law will be accompanied by his son, and his starting point is to acknowledge that for most, Canberra is a fortunate place in a fortunate country. But he wants young Zak to know that’s not the case for everyone.

“It’s easy to not notice and forget what’s going on. I’m hoping Zak gets a bit more awareness that we are very lucky where we are but also not to forget others and whatever he can do to help, particularly in a hard year like this”, he says.

Youth homelessness can have a particularly devastating effect in Canberra, where crisis shelters cannot take in unaccompanied children under the age of 16. In 2019, the Conflict Resolution Service worked with 462 young people at risk of becoming homeless and has seen a concerning increase in the number of young people below the age of 15 at risk in the past few years.

“We know homeless people have constant levels of fear,” Martin says. “We’ll be sleeping out in the safety of our cars tonight, but if you’re sleeping rough or don’t know where you’ll spend the night, you get none of that. The longer that happens with kids, the more they lack stability and that can create a lifelong set of damages”.

NSW Scouts Chief Commissioner Neville Tompkins is a CEO sleepout veteran: he’s been one of the event’s most successful fundraisers for years and already has $20,000 pledged for Vinnies. His many decades with Scouts have given him a focus on developing leadership skills but also self-esteem and resilience.

“If we can develop those skills amongst our young people, we can set them up for life”, he says. “But if they are denied those opportunities through homelessness they are disadvantaged, and most likely for life”.

As I’ve argued before, homelessness is a terribly complex issue and one that can’t be solved by simplistic throwaway proposals. Certainly, a couple of nights in a homeless shelter before being turned back out onto the streets is no real solution. What we need is a far more structured approach that would entail the creation of a pool of funding sourced both from government and charities to build and staff a permanent facility that would not only provide shelter for the homeless for much longer than at present but would also provide services and support that would address the issues and problems that all to often contribute to a person becoming homeless – and I think we can all guess what at least some of those issues are. This would be accompanied by, as someone else has suggested, the ACT Government expanding its stock of social housing to enable the placement of each person in a basic apartment once they were ready to leave the supported environment of the facility to which I have referred above. Naturally, this would also require further transitional support after each individual was placed in independent accommodation. As I have said, this is a more structured approach than we see currently but would require the full cooperation and resource commitment of our charities sector, not just the ACT Government. Let’s see who’s really serious about finding real solutions to homelessness.

How about the housing minister sleeps outside

Better if they lobbied for corporates to pay their fair share of taxes to support social housing and mental health and rehab services. How much could be funded if we redirected the $500m war memorial refurb??

Thank you for this great article The RiotACT!

Honoured to be supporting such a great organisation Vinnies Canberra/Goulburn and Vinnies CEO Sleepout who do amazing things for people in need across the Canberra region. Keep up the good work Vinnies!

Martin Fisk how did you go mate