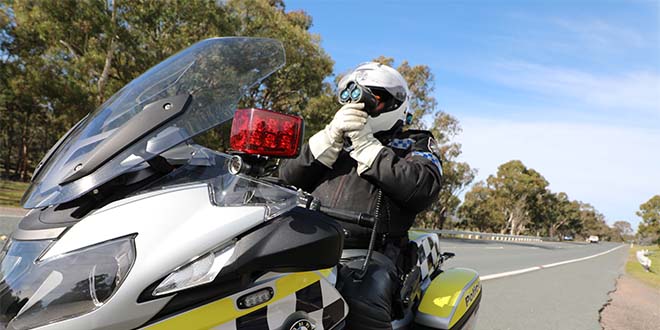 Double demerits won’t be enforced for the National Day of Mourning public holiday in the ACT, but it’s a different story in NSW. Photo: ACT Policing.

Many businesses will shut down this Thursday (22 September) for the National Day of Mourning to mark the Queen’s passing, but police will still be out in force.

An ACT Government spokesperson said while the standing arrangement was that public holidays meant police would enforce double demerits, that wouldn’t be the case this time.

“[It] does not include the National Day of Mourning which was announced by the Federal Government on 12 September,” they said.

“Mobile Speed Camera Vans will be in operation to support road safety, and Canberrans are reminded to drive safely and to the speed limit.”

In addition, paid parking areas will be free on 22 September, as is the usual arrangement for public holidays.

“Meters will still be on, but people do not need to make payment,” an ACT Government spokesperson said.

“The community must still park safely and legally.”

However, across the border, NSW Police will enforce an extended period of double demerits around the National Day of Mourning public holiday.

Double demerits have been in force since midnight today (12:01 am, Wednesday, 21 September) and will remain until 11:59 pm on Sunday (25 September).

Additional police will also be deployed across the state to target other high-risk driver behaviour, such as drink, drug, dangerous and distracted driving.

“As always, our focus remains the safety of the community across the state, and we want everyone to reach their destinations safely and without tragedy,” he said.

“Our message is to take your time, drive to the weather conditions and respect other road users.”

Motorists were reminded school zones will still be in operation on Wednesday (21 September) and Friday (23 September), which meant 40 km/h zones would be in effect between 8 am to 9.30 am and 2.30 pm to 4 pm as usual.

Police will also target stopping and parking in designated no stopping or no parking areas, along with double parking.