Before founding Coffee Guru in the early 2000s, Stephen Ashworth ran a takeaway shop in Phillip’s Colbee Court. His Steve’s Special burger (chicken schnitzel, lettuce, mayo, bacon, cheese and pineapple on a hamburger bun) was the stuff of legend in my family, to the point that he once opened the shop after hours so my twin sisters could have Steve’s Specials for their birthday dinner.

When he sold the shop, we figured out how to replicate Steve’s Specials at home and I hadn’t paid much attention to Phillip’s takeaway scene since. That was until I met the owners of Wattle Snack Bar in Phillip for the first time last week (for disclosure’s sake, the owners are also the parents of my sisters’ boyfriend… very Canberra) and discovered that they made Tim Tam milkshakes. I don’t pass on the opportunity to try a new place when there are biscuit-flavoured milkshakes on offer. 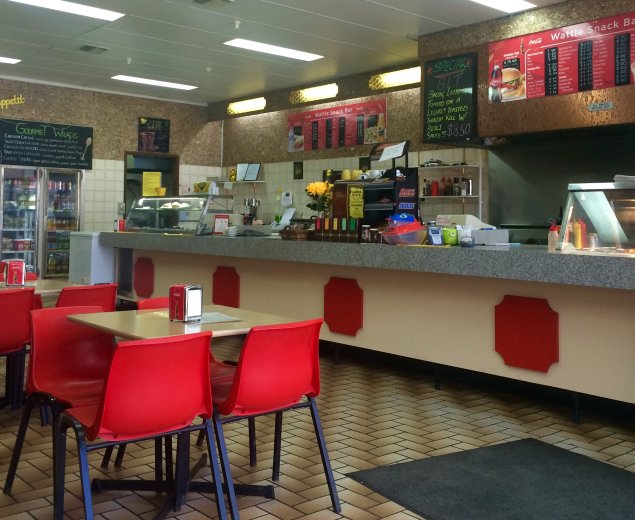 Wattle Snack Bar has been a fixture in Dundas Court for almost three decades, but the current owners Amanda and Keith have run the place just for the past 18 months. They describe it as having a 1960s ambience, which means that although it’s been a long time between refurbishments, it is charming in its own way.

The menu has traditional takeaway favourites including hamburgers, fish and chips and hot dogs, as well as lighter options including wraps and sandwiches. The potato scallops, battered savs, fish cocktails and seafood sticks are made fresh in house each day too. A warning: The menu is huge. Unless you know exactly what you want before you enter the shop, you’ll spend a long time and brainpower trying to figure out what to order.

I eventually decided on a chicken schnitzel with chips and salad for $10 and my friend ordered the chicken Caesar burger (chicken schnitzel, egg, lettuce, bacon, Swiss cheese and Caesar salad dressing on a toasted burger bun – kind of like a Steve’s Special, but not quite) for $9.90. Still full from breakfast I decided against the Tim Tam milkshake on this visit, but external accounts suggest that it’s pretty delicious, and when I do try it, I’ll report back. 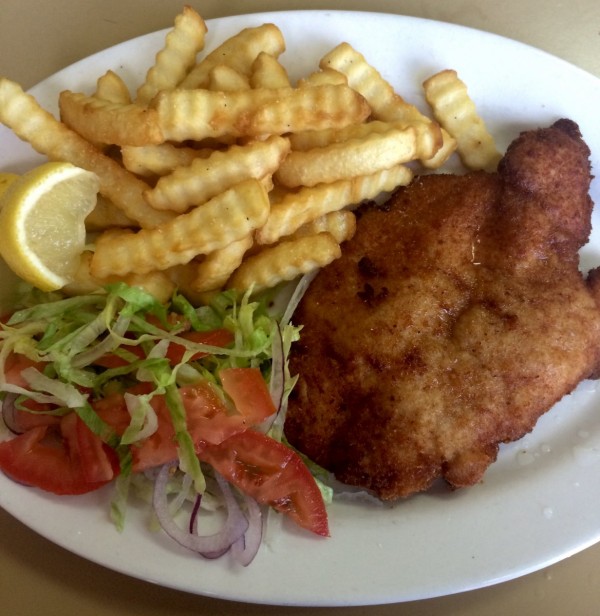 We ordered and took a seat on two bright red chairs in the corner of the shop while we waited for our food to arrive. 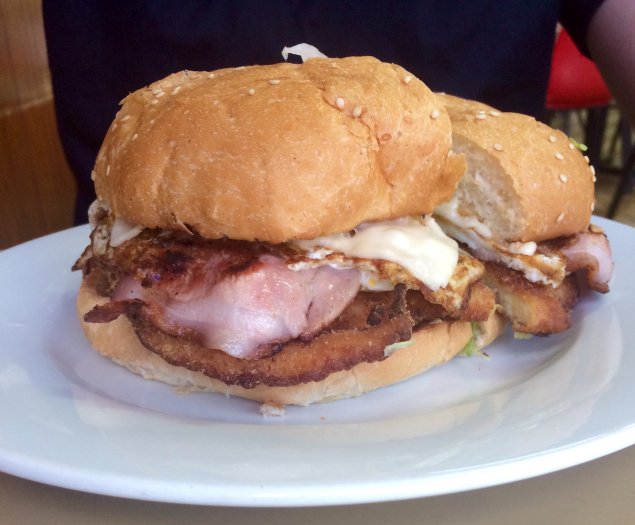 Our meals arrived a short time later, and were a good size considering we’d paid a total of $19.90 for both. My chicken schnitzel was hot and crispy (I do hate a soggy schnitzel), the salad was fresh and there were more than enough chips on my plate to share. I will admit to a slight case of food envy when my friends’ burger arrived. I know it looks good in the picture, but my second-rate photography skills really don’t do it justice. For a Friday afternoon lunch, you can’t do better.

Wattle Snack Bar is the first takeaway I’ve tried in Phillip in a very long time, and I’m curious to know what others in the area are like. What (and where) should I try next?

What: Wattle Snack Bar
Where: 32 Dundas Court Phillip
Opening hours: 6am to 2.30pm Monday to Friday; 6.30am to 12.30pm Saturdays
Website: http://www.wattlesnackbar.com/

If one wants quick and good meal, bust in here.
I have been here and the food was pretty good and value for money.

I often grab a quick meal in Phillip. It’s usually not too hard to find a car park and I like getting to know some of the business owners. Keith and the team at the Wattle do a great job making customers feel welcome and the food’s pretty good too.

Russell Nankervis - 6 hours ago
Lori J Tas better vote Greens then. They value public institutions like this View
Monica Tiffen - 8 hours ago
It is a very interesting place. I hope things are worked out!... View
Teresa Layton - 9 hours ago
Mark Huppert agreed. What an obscene amount of money being thrown at something that requires no change. View
News 70

Anthony Briscoe - 8 hours ago
Barr BARR from opening his mouth and send the RAT to kingdom come for a start View
Jack Hearps - 9 hours ago
Yep ... ignore international perspectives and focus on our navel ... especially enriching our local religious zealots ... lib... View
Russell Nankervis - 10 hours ago
The Canberra Liberals will never change. Climate change affects us all and the UN set important benchmarks to meet. Pretty su... View
Food & Wine 14

chewy14 - 11 hours ago
Another great sentencing outcome by our courts that will really provide a great disincentive to individuals in the community... View
Food & Wine 1