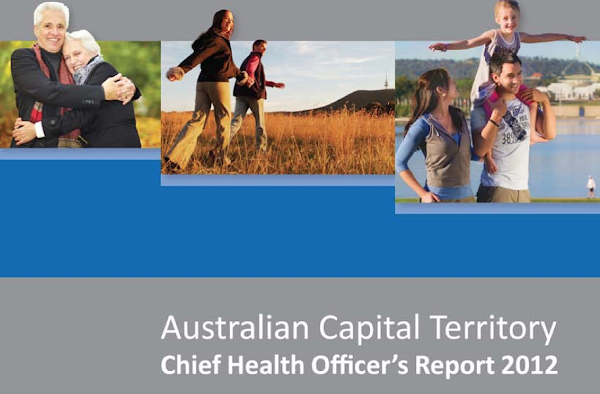 On the last sitting day the Health Directorate has sent in the ACT Chief Health Officer’s Report 2012.

With no data since 2010 it’s a little hard to tell where we’re at, but here are the conclusions on demography:

UPDATE: 24/08/12 15:26: Chief Minister Gallagher says this shows how great everything was two years ago:

The ACT Chief Minister and Minister for Health Katy Gallagher MLA today tabled the 2012 Chief Health Officer’s report in the ACT Legislative Assembly, which shows the people of the ACT are generally very healthy.

The report provides information on the health and wellbeing of the ACT population between 2008-10.

“The information in this report is important as it helps us prepare for the health challenges of the future and gives us a snapshot of what is largely a very healthy city,” the Chief Minister said.

It shows ACT residents generally have higher education levels, employment rates and incomes than the rest of Australia, their life expectancy is high and they are less likely to be smokers than other Australians.

Hate to point out the obvious, but how can anyone trust any of these figures?

dolphin - 8 hours ago
whatever happened to encouraging flexible working? I don't know many people who want to return to working 5 days a week in th... View
ACT Election 1

dolphin - 9 hours ago
bit late to be submitting policies to treasury for costing... heaps of people have already voted... View
ACT Election 5

dolphin - 9 hours ago
and Scott Morrison can't tell the difference https://reneweconomy.com.au/on-first-day-as-pm-morrison-learns-difference-betwee... View
dolphin - 9 hours ago
Just remember that the Belco party are just a front for the Liberals trying to siphon off enough votes to get the libs over t... View
Opinion 9

dolphin - 9 hours ago
You missed the point on this one - nothing wrong with bringing a bit of life and vibrancy into the city. it seems like you're... View
HiddenDragon - 13 hours ago
"...once again, we’re being told that the way to enhance Canberra’s vibrancy is to mimic other, bigger cities across the... View
Brisal - 18 hours ago
If it helps to revitalise another of those dingy laneways then I'm all for it. Scoff if you like but if it ultimately turned... View
Food & Wine 34

Jenny Lowes - 9 hours ago
Judy Sheargold Sure Jude, good idea. Will take that being Gospel, from Linda!! View
ACT Election 116

rossau - 13 hours ago
Surely growth is just growth: what downside could there be to that? Everyone and almost everything is predicated on growth. E... View
News 4

HiddenDragon - 13 hours ago
"Is it time the ACT got its own independent police force?" Why not - it does such a brilliant job of managing the other big S... View
A_Cog - 1 day ago
Should the ACT get its own police force? NO! It'd be run just as badly as every other ACT Govt service. Instead of buying ser... View
News 3

ssek - 17 hours ago
More animals get hit during drought because the drainage next to roads is the only place there is green feed. When there is g... View
Karen Feng - 1 day ago
is this an indication that we do not have enough land fornthe wildlife to thrive? theres this road from holt to Fyshwick that... View
Community 1

Brisal - 17 hours ago
“I drive past the avenues of corflutes thinking how, aside from the currently elected, I don’t know a single thing about... View
News 1

Capital Retro - 18 hours ago
Anyone been watching Ozark on Netflix? View
News 5

bj_ACT - 21 hours ago
It was always a bit funny when Turner residents were complaining about extra buses when whole swathes of suburbs lost their b... View
chewy14 - 22 hours ago
Honestly, is there anything more NIMBY than worrying about the "city coming for their neighbourhood" in an area less than 1km... View
HSewell - 23 hours ago
Good result View
News 18

ACT Labor likes to take the high moral ground but its latest TV ad for the coming election will leave...
Opinion 9

I couldn't help but scoff when I saw the most recent round of advertising for the Verity Ln Market development...
Property 5

@The_RiotACT @The_RiotACT
Working from home has been proven viable and employers such as the APS need to accept the changed reality post-COVID and make it a real option for their staff where practicable https://t.co/fklowjt1es (44 minutes ago)

@The_RiotACT @The_RiotACT
Unsurprisingly, most of you really, really hate the election corflutes. But how do you feel about voting? Are you also "cold and cynical" about the forthcoming ACT poll? https://t.co/mBtNh4E1uT (10 hours ago)

@The_RiotACT @The_RiotACT
There's plenty to do in Canberra as school holidays continue, including a construct-a-toy workshop, a circus skills program + a host of other great events https://t.co/4qV9Axh8PB (11 hours ago)