Chief Minister, Katy Gallagher, has today announced new portfolios for ministers to allow for the inclusion of a sixth ACT minister into Cabinet.

Last Saturday Mick Gentleman MLA was elected by the ALP Caucus to become the sixth ACT minister. This appointment has prompted new Administrative Arrangements to be implemented.

“Existing ministers have kept their major portfolio responsibilities under these new arrangements reflecting their strong performance over past years and to maintain consistency in work that is underway particularly in major projects,” the Chief Minister said.

“I have decided to retain the important portfolios of Health, Regional Development and Higher Education while adding the responsibility for the Asbestos Response Taskforce to my list of portfolios. This decision reflects the Government’s priorities in these important areas of policy.”

The Deputy Chief Minister, Andrew Barr MLA, will continue the important work of budget management, tax reform and economic development as Treasurer and Minister for Economic Development. In addition he will pick up responsibility for Housing which will draw together responsibly for land development, social housing and housing supply within one Minister’s portfolio.

Joy Burch MLA will remain as Minister for Education and Training and Minister for Disability. This will allow Joy to continue the excellent work she is doing across the education sector and also allow for the seamless transition to continue under one of the most significant social reforms of our time – the NDIS, which started in the ACT this week.

Shane Rattenbury MLA will continue in his responsibilities under the Territory and Municipal Services portfolio delivering responsive and high quality services to the people of the ACT. Mr Rattenbury will also maintain Corrective Services where he has been working so hard on the prison expansion and programs like Throughcare.

Minister Rattenbury will take on responsibility for Sport and Recreation which will focus the government efforts in promoting healthy lifestyles and encouraging active transport.

Mick Gentleman MLA take on the job of Minister for planning using his experience as the Chair of the Legislative Assembly Standing Committee on Planning, Environment and Territory and Municipal Services. He will also takeon responsibility for community services which reflects the connection Mick has established over many years with the non-government organisation sector.

“This reallocation of portfolios strikes the right balance to maintain ministers in portfolios where they have extensive experience and interests but also bring a fresh look to important areas of government policy,” the Chief Minister said.

“The inclusion of another Minister in the Cabinet also allows for a rebalancing of work to better manage current workloads.

“I thank my Ministerial colleagues for their assistance and patience whilst these new arrangements were finalised and look forward to working with a strong team of ministers to deliver strong and stable government for the ACT community.

“In particular, I welcome Mr Gentleman to the Cabinet and I look forward to working with him in the lead up to the next ACT election.

There will be some changes to administrative structures with Economic Development Directorate joining the central agency of Chief Ministers and Treasury. This reflects the continued focus of creating a one-government approach to our delivery of services to the people of the ACT along with the critical importance of ensuring that economic development is at the centre of government policy deliberations.

The function of the Commerce and Works Directorate will be delivered by the by Treasury arm of CMTD.

The new ministerial arrangements will commence from Monday 7th July, 2014. 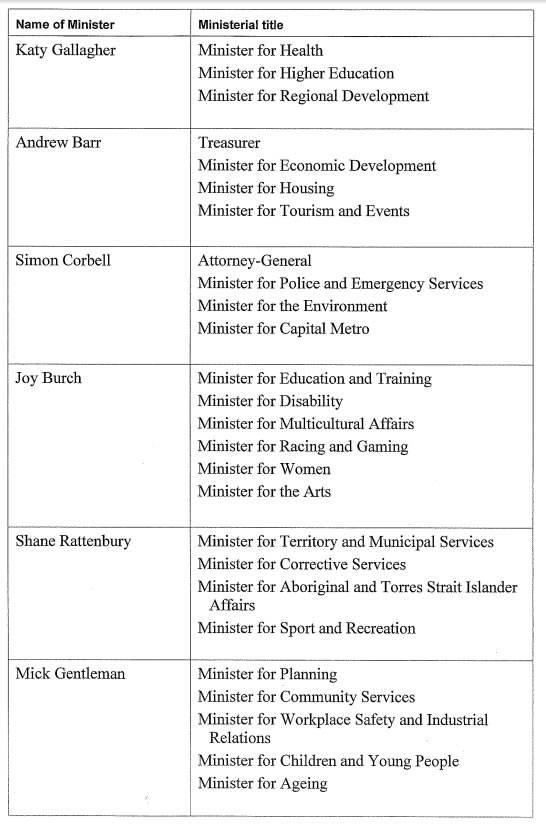 Tom Adam - 9 hours ago
Natalie the Woden area around the bus depot. (Where they had to due to land sale agreements). Not the Phillip business Centre... View
Natalie Roseworn - 10 hours ago
Tom Adam they announced some major refurbishments for Woden/Phillip not long ago. View
Lucy Irene - 18 hours ago
Mmm, not sure why ‘rainbow’ roundabouts could be an issue, curious! View
Property 20

John Hutch - 13 hours ago
I thought that these protests were a disgraceful display of the left-wing mentality and agenda to maintain oppression and vic... View
Capital Retro - 14 hours ago
"marginalisation by choice" being the PC term for "victim industry"? View
Spiral - 17 hours ago
Does anyone have accurate recent stats on how bad the problem really is: This article: https://www.news.com.au/national/black... View
News 36

@The_RiotACT @The_RiotACT
St Benedict’s in Queanbeyan has been helping locals for more than 15 years, offering meals, friendship, advocacy & support to those who need it most https://t.co/l22RO7R84o (50 minutes ago)