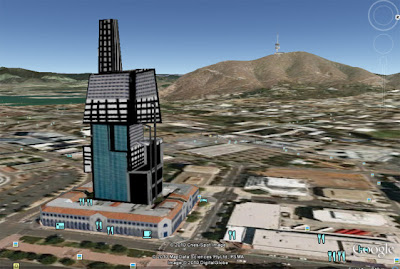 I stumbled on this while checking out my house on Google Earth (yes, that’s oh so passé these days).

Strange I never noticed this, given it sits atop the Melbourne Building. It’s creator calls it “Euphoria’s Abomination“:

The Abomination is a 145m office building built over the site of the historic Melbourne building. The construction was allowed as the result of an accountancy error, which was realised only after the heritage-listed 1930s retail building had been bulldozed and not amended until excavation was well under way, too late to save the historic landmark. As way of compensation to the people of Canberra (snicker), the ground and first floors have been painted to resemble the original building. The height limit violation issue was easily resolved by raising the Parliament Gouse flagpole 300m.

A harmless prank no doubt from the UC architecture school (or is that being too kind?). Anyway, Google will demolish it soon.

If it takes as long for them to delete it as it takes for them to update the rest of their mapping sites, it should still be there until at least 2015.

So cool thanks for letting us know. I hope Google doesn’t demolish it actually.

Judith White - 15 minutes ago
While speaking about racism to a friend whose skin is very, very dark, she said '" Ï don't see colour ." Does that make my f... View
Aaron Still - 11 hours ago
Rob Thomas clever way of putting it 👍 View
Gem Gemm - 14 hours ago
I am so utterly dumbfounded that people are upset over this? Like water is wet. It's absolutely a micro aggression and subtle... View
Business 38

chewy14 - 53 minutes ago
I do find it funny that so many activists and advocates for single areas seem to always have the reaction to any increased fu... View
What's On 12

Bronwyn Tolley - 7 hours ago
Karin Hagel Prince Phillip at Buckingham Palace, July 20th 1969. The day man landed on the moon ! View
Maya123 - 8 hours ago
LOL, I have about nine pairs of shoes I wear away from the house. Plus two handbags, which I haven't used for about two years... View
Tig Beswick - 10 hours ago
Robyn Lynette Pierce - when I was a little girl, I went to the NSW Governor General’s house because my dad had been invited... View
Breaking 1

carriew - 9 hours ago
Is there an update on what the package actually was? View
Opinion 9

longlunch - 11 hours ago
The only quiet things about this company are their refusal to respond to criticism, or to give details of the number and natu... View
Shaun Cummins - 13 hours ago
Even a bee is noisy! View
Property 8

realist - 12 hours ago
With all due respect Chris Miller, I think you have been brain washed by this government. It is quite clear with the number o... View
Opinion 66

Frank Landolina - 13 hours ago
Grammar check hates me. Drivers have been dumbed down with all this low speed strategy. Better driver training and improved r... View
Frank Landolina - 13 hours ago
We have funded down drivers with all the low speed limits. Europe has a different approach and wh... View
show more show less
*Results are based on activity within last 7 days

@The_RiotACT @The_RiotACT
Canberra's generally done well out of the Budget, but according to Ian Bushnell, there are still some glaring oversights https://t.co/a0aV2gDxpP (2 hours ago)

@The_RiotACT @The_RiotACT
Have you ever thought about getting involved in the fast-growing sport of trail running? The Stromlo Running Festival may be your perfect entry point https://t.co/CIff9vxQuN (12 hours ago)

@The_RiotACT @The_RiotACT
Fancy making the most of the beautiful autumn days here in the capital? There's plenty happening - so get out and about! https://t.co/GuOk85t9aP (13 hours ago)