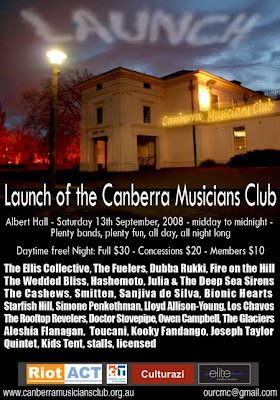 RiotACT sponsors The Canberra Musician’s Club are having their official launch on Saturday at the Albert Hall with no less a luminary than the Chief Minister Jon Stanhope himself coming to witness the birth.

The twelve hour, four stage extravaganza will feature a veritable who’s who of Canberra musical talent from a wide variety of genres.

The program is online for your perusal.

Highlights for mine are Fred Smith, the Haunted Attics, Smitten, The Ellis Collective, The Fuellers, Julia and the DSS, and the Cashews. But there’s a huge amount of great stuff there.

It’s going to be a big one. I’ll just have to record the rugby.

Dubba Rukki playing last will have the dance floor heaving.

UPDATED: And a huge boo to the In The Mix crowd who thought the CMC free standing signage would be improved by their posters.

Hope the CMC gig went well. I swung by in the afternoon and it was a rollicking good time. Look forward to future events.

I also went to the ITM gig and, some of you will be pleased to hear, the second stage was demolished by a 1:00am thunderstorm! So, the Gods agree with you – sign-jackin is bad karma and shall be punished! However, it was a pity because it pretty much destroyed the gig, and most of the few punters who made it there (twas a disappointing turnout) had left by 3am and thus missed out on James De La Cruz and Danielsan.

BTW, if you like good Aussie hip hop, check out both Dazed and Flawless (an up-and-coming Melbourne trio), and Roshambo and D’Opus – both top notch Aussie good-vibe hip hop acts. Props.

One of my mates used to do a good Rob Thomas impersonation. He would stuff a whole cigarette packet in his mouth and start singing matchbox 20 songs. It sounded just like him.

Is Matchbox 20 the most boring band you’ve ever heard? I mean seriously, their CDs seem to be one 45 minutes song.

so you missed them earlier this year ?

I’m afraid I’ve only heard of three of those bands on the poster. Does this mean I’m out of touch?

Aha, then here’s your big chance to discover the mass of young talent that Canberra has to offer. But you can click here and start your edumacation: http://www.myspace.com/acousticnuts

And you’ll probably find links further down to many of the other acts on that day.

And I’ll cover you with the percussion grenades while you wield the flamethrower for the MORonic music mentioned above.

I’m afraid I’ve only heard of three of those bands on the poster. Does this mean I’m out of touch?

Ged – you crack me up dude.

The ITM-endorsed poster crew should take it easy on postering over other people’s tailor-made signs. Give it a few years and they might be treating their fried synapses to the comparatively rustic sounds of the CMC after they can’t handle any more deep progressive ghettotech.

So what’s this Music Club’s agenda?

Over time will there be a series of mysterious incidents involving non-affiliated bands and music venues….. strange accidents…. people disappearing without a trace…..

I apologise! Remember, I’m new to all this, still learning how the whole thing works — have a look at some of the silly comments on my blog. I really do appreciate the chance to air my story on fraudulent (and unchallenged) advertising, which is the whole point.

I would be equally peeved if Matchbox-20 turned up in Canberra without Rob Thomas…..

Keep up the good work.

Ged we gave you a whole story on this, wrecking other people’s discussions is extremely bad form.

This event is about new music not dinosaurs.

You should check it out.

Will Herman’s Hermits be performing there?

I mean not the fake, bogus, phoney, fraudelent bunch of impostors that are playing at Canberra Casino next Monday and Tuesday, but rather Peter (Herman) Noone and some of the originals? No, I thought not.

Check out my blog on Herman’s Fake Hermits — before it’s too late!

The downside of selling your name to a promoter.

It’s also a bastard act to blame members of an online community for the acts of a single Canberra dance music promoter.

The ITM parties happen every year with the promoter/club that puts up the best bid. This year it’s Pang. It’s easy to hold baseless grudges johnboy.

That signjacking is a pretty bastard act.

Bailey, that would be…

I’m off to see Bill Baily, then may drop into the CMC gig later.

Ah, but are they the original members of Boom Crash Opera??

Phil Cowan - 28 minutes ago
The 26th Jan is a Public Holiday because on the 26 Jan 1949 because we ceased being British subjects and became Australian ci... View
ghutch - 11 hours ago
A lot of good comments. Why don't we celebrate Oz Day on 1 Jan. Yeah I know you all still asleep from new year eve. But is th... View
Jenny McInnes - 11 hours ago
David Johnson it most likely was a public holiday there then View
Opinion 55

Tim McMahon - 1 hour ago
let’s put rego and insurance on these bikes as well as road worthy checks every year just like cars trucks and everything e... View
Colette Robinson - 6 hours ago
Adrian Fui Fui Moy but the path *is* being used for racing. Pedestrians and slower cyclists in either direction are merely ob... View
dolphin - 8 hours ago
despite your name you are neither rational or a very good observer. View
Property 10

Peter Curtis - 8 hours ago
It is $500m not being spent on anything else but a dubious project to say the least. Ian tries to explain it all away as acts... View
Breaking 2

Peter Curtis - 8 hours ago
Not to sure what a "Canberra mentality" would be but as long as we surrender the principle of solidarity for the belief that... View
Food & Wine 1

Jackie White - 12 hours ago
Thank you. I never walk around the lake with headphones precisely because of the risk of collision with a cyclist View
James Messervy - 12 hours ago
Jackie White no, I always ring my bell or call out.... View
Community 7

Susanne Jennings - 12 hours ago
Great to see it so successful- well done! View
show more show less
*Results are based on activity within last 7 days

Anyone who was finding their way as a young adult in Canberra in the mid-1990s knows that a night out...
News 18

@The_RiotACT @The_RiotACT
Have the voices of post-Vietnam veterans been missed in the fight over the War Memorial expansion? Some veteran organisations say yes https://t.co/UC34DwlGFC (5 hours ago)