Colder winter sees surge in demand for shelter from homeless

The number of homeless people is rising, says Safe Shelter.

Canberra’s icy winter has seen demand spike at emergency accommodation provider Safe Shelter, with the volunteer organisation for the first time having to turn away someone seeking a bed for the night.

With the mercury plunging into negative territory for most of July, Safe Shelter says the average number of homeless men at its shelters exceeded six guests per night, with the church halls it uses full on four nights and twice having to exceed the normal limit of eight ‘guests’.

To 28 July, 14 weeks since opening Safe Shelter for this winter, 156 volunteers had welcomed 368 homeless men, an average of 3.76 guests per night, seven nights every week.

Safe Shelter said most of the men were local, with no evidence that interstate homeless men move into the ACT just to take advantage of the Territory’s welfare services.

Coordinator Richard Griffiths told the ABC that Safe Shelter had had to modify the halls this year so that some could accommodate nine instead of eight guests.

“It doesn’t sound much but it’s got us through on five occasions over the last four weeks,” he said. 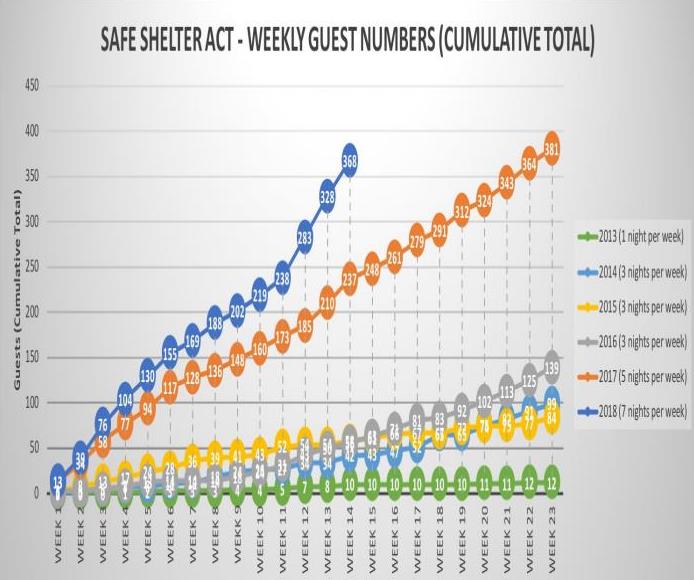 Mr Griffiths believes that there are a lot more homeless people in the ACT, but Safe Shelter had reached its limit in the inner city with its three shelters. He hopes to expand the one night a week pilot in Tuggeranong.

“We can’t do any more in the inner city area, it’s too confusing if we had another cluster of church halls in the city but we’re hoping that the Safe Shelter in Tuggeranong will be able to expand to three shelters,” he said.

They’ve got to be able to expand to five nights very quickly so the homeless will go in there.”

Mr Griffiths said there was a dearth of supported accommodation in the Territory and nowhere for the homeless to step up to from their present situation.

“There’s no space for them, they can’t rent on Centrelink benefits and even the ones with jobs can’t afford anything like the rents that there are,” he said.

Hopes of more funding for emergency accommodation in the ACT Budget came to nought and now the community is waiting on the Government’s housing strategy, expected in the next six months.

Next year’s bus network changes posed another challenge with the Route 7 bus which currently stops at all three city shelters re-routed several blocks to the east of and north of the Salvation Army and St Columba’s shelters in Braddon.

Safe Shelter believes that many on foot and with all their gear may not make it to a shelter, particularly if social services find it harder to explain to them how to get there.

The three inner-city shelters are St Columba’s, the Salvation Army halls in Braddon, and All Saints in Ainslie. The Tuggeranong pilot is open on Sunday nights in the Salvation Army’s hall in the Churches Centre in Anketell Street.

There will be a final induction course for potential volunteers on 21 and 22 August. For more information, e-mail safeshelteract@gmail.com

Tim Birkett - 4 minutes ago
I wish they'd done the same up in Taree before it was bypassed View
Tramcar Trev - 18 minutes ago
I must be really old, I remember when to get to Broulee it was dirt road. View
Clive John Trenton - 1 hour ago
Come on people. It was replaced for a very good reason! As an old bridge it was likely costing a fortune to maintain due to i... View
Property 15

Greg Myat - 22 minutes ago
Warwick Bradly Take it to Belco where people are, first. Or past asio and russell offices across kings ave. It needs to go pa... View
Greg Myat - 25 minutes ago
Martin Budden Every road will just be one big carpark then. View
Tramcar Trev - 48 minutes ago
$162million for about 1km of light rail does seem excessive. why do they insist on laying the track inn concrete where the tr... View
Community 7

Grahame Barnett - 41 minutes ago
We "bribe" our magpie gang. We feed them. They don't attack their feeders. View
Karen De Britt - 42 minutes ago
Feed her mealworms, she'll come around 😁 View
News 28

whatwik - 53 minutes ago
Ha, try NSW regional travel. Disappointing yes, but prudent. Some of us do wonder about the obsession with the ACT Chief Mini... View
chewy14 - 2 hours ago
JC, No spin here, just facts. Whatwik claims that others have had to backtrack on their plans. Except none of the other state... View
Community 25

@The_RiotACT @The_RiotACT
ACT Attorney-General Shane Rattenbury has announced the appointment of a dedicated coroner in the Territory thanks to a $3.8 million budget boost. It's hoped the reform will reduce lengthy waits for grieving families, and has been welcomed by advocates https://t.co/viru0BQR0J (6 minutes ago)