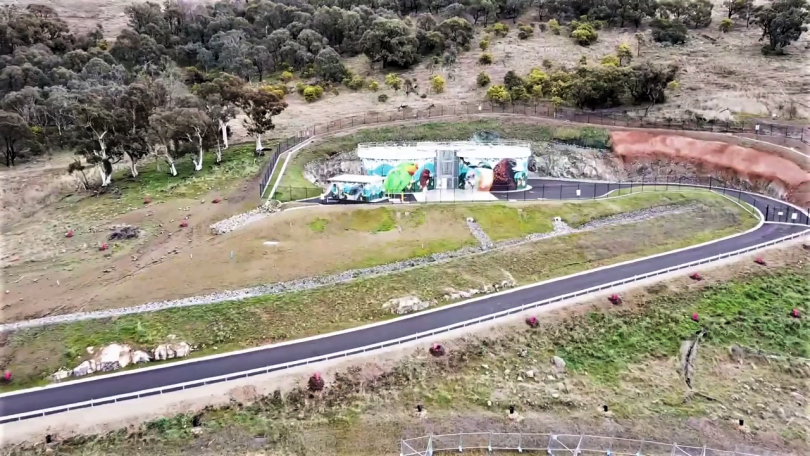 A giant, vibrant mural of native and endangered wildlife and plants has been completed overlooking the northern Canberra suburb of Taylor.

The 7 by 80-metre mural covers the two Icon Water tanks and a service building on the side of One Tree Hill in the suburb’s northwest.

It took urban artist Geoff Filmer of Graffik Paint a month to complete in late 2021.

“It’s halfway up the hill and it just looks out over everything,” Geoff said.

“It’s such a gorgeous view to walk up there and check it out.”

The inspiration for the work comes from nature and wanting to highlight some of the endangered animals that live in Taylor and surrounds.

Geoff said flora and fauna shouldn’t be taken for granted.

“We’re losing beautiful animals at a rapid rate, more from ignorance and not being aware of the gorgeousness of them,” he says.

“Like the Superb Parrot – a gorgeous Canberra bird that we are destroying the habitat of and pushing to the brink of extinction. We’ll lose it from Canberra.”

Icon Water commissioned the mural and Geoff collaborated with his parents, both retired artists, to complete the work.

The size of the piece was a huge task in itself. But having to break the piece up over three separate buildings presented its own challenges to make it a cohesive piece.

He said that how you see it varies on where you are in the landscape.

? Have you been up north recently and seen the One Tree Hill water tank?? Canberra street artist Geoff Filmer and Icon Water have crafted a striking mural on Taylor’s water tanks, balancing native birds and fauna, some of which are endangered in the areas that surround Taylor.Can you spot the Superb Parrot, Sacred Kingfisher, Wedge-tailed Eagle, or Golden Sun Moth? ??? Check out Suburban Land Agency to see more urban renewal projects.

Other works you may have seen by Geoff include the water tank on Hindmarsh Drive between Woden and Fyshwick, the back of Stage 88 and dozens of those green boxes dotted across the city.

“I’ve painted a number of different things at lots of different schools,” he says, “and I’ve done heaps of those electrical boxes.”

Canberrans are renowned for their love of and connection to public art – especially the works in their local area.

From the metal sheep at Kambah Village to the stainless steel Ginninginderry Light in Crace and the infamous Belconnen owl.

He says he’d be deeply touched if his work became an icon of the new suburb.

“I would love if that piece becomes iconic and people think of that when they think of Taylor.”

He hopes locals embrace its part of their daily parks and visit as much as possible.

“People living a the bottom of the hill in quite dense housing would see it and want to have a closer look at it,” he says.

“If you’re standing there you have a brilliant view of Canberra … you’re also immersed in that bush scape.”

He says the work will stand the test of time and hopes the paint lasts at least for the next quarter of a century.

We want more of Geoff’s work in ACT please!

Such an amazing artist

I can see it from my backyard, I love it!

Sonya take the babies for a drive by 😂