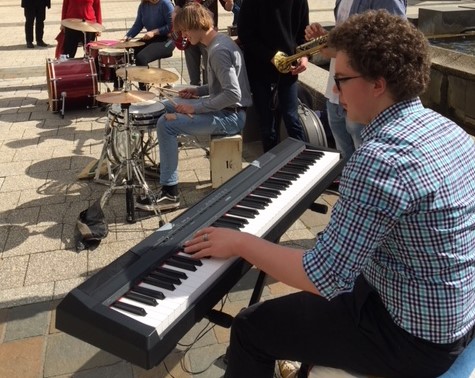 Musicians perform at an H Course protest outside the Assembly. Photo: File.

Funding for an axed ANU music course for ACT college students should be restored and the Education Directorate should resume talks with the university about whether it could be re-introduced for Year 11 students next year, according to a Legislative Assembly committee report.

The ANU Extension Program’s Advanced Music Course, or H Course, which provided a pathway to the ANU for aspiring classical and jazz musicians for 30 years, was discontinued last year after the Directorate decided to re-direct funding to other programs.

The decision sparked a petition, protests and an inquiry by the Standing Committee on Education, Employment and Youth Affairs, which tabled its report on the Inquiry into the cessation of the Music for Colleges course on Tuesday.

The Committee report said there was significant value in the continuation of an advanced music course for students who are gifted and talented in the arts, and that it should be funded and managed by the Education Directorate.

Entry for the course, which should be BSSS accredited in order to contribute to students’ ATAR results, should be by audition only with priority given to students who attended ACT public schools without advanced music options at their local school, the Committee found.

The report recommends that the Education Directorate redirect funds to ensure the immediate resumption of the H Course in Music once an acceptable agreement has been reached with the ANU School of Music.

Its says talks with the ANU should include consideration of students who entered Year 11 in 2019 and would otherwise have enrolled in the H Course, and that any other model considered by the ANU not put at risk the current accreditation status that contributes to a student’s ATAR score.

Liberal arts spokesperson Vicki Dunne said the course should never have been defunded and the Government should restore it.

“The recommendations of the majority of the committee recognise the value of the H Course to the most talented of Canberra’s young musicians,” Mrs Dunne said.

“The H Course launches young music students into further study and, in many cases, international careers in music.

“These students become ‘ambassadors’ for Canberra’s music training programs, with the potential to attract new students and their families to our city, with all the added benefits that brings.”

She said it was disappointing that the Government failed to see the H Course as an investment in the future of the ACT’s young people.

“It is hard to believe that such a long-standing and successful music course ‘did not fit with ArtsACT’s current priorities’ and that they were prepared to defund it,” she said.

aussie2 - 57 minutes ago
Here is another for the "shopping list". It is government responsibility to ensure its citizens have access to pools and othe... View
2902 - 4 hours ago
Imagine the money one could make building apartments on this site, right out the front of the proposed light rail track View
ChrisinTurner - 4 hours ago
There is not enough attention to maintaining services in areas with dense populations. The government seems to be working on... View
Opinion 75

estelle3724 - 2 hours ago
I would like to ask Ms Castley what more she wants the government to do for business. She never mentions that business receiv... View
News 5

phydeaux - 3 hours ago
Rather my point, JS9. “…without qualification”. With significantly different individual circumstances, to give an answe... View
Kathy Blunden - 4 hours ago
I was also totally shocked with my electricity bill. It is the highest bill I have ever received and I have solar panels!!!... View
JS9 - 4 hours ago
It is a weighted average across a range of plans - so it means some will go up more, some go up less. Over the basket of plan... View
News 12

lexyliz - 8 hours ago
Does anyone know what happened with this case? A friend mentioned it yesterday as we are planning to send our son to this cen... View
News 7

@the_riotact @The_RiotACT
The ACT Government's restrictions on #retail and #hospitality trade have caused devastating damage to the sector, says the @CanberraLibs' Shadow Minister for Business, Leanne Castley https://t.co/mbDUXSRY5x (46 minutes ago)