The Molonglo Valley will eventually be home to 55,000 residents. Photo: File.

The first land release for Molonglo Group Centre will still take place two years later than expected, but the release of the updated concept plan for the project has been welcomed by community representatives.

The Molonglo Valley Community Forum had accused the ACT Government of breaking an election promise to fast-track the group centre, and the concept plan release and clarified timeline is in response to a Legislative Assembly motion in October 2021 from Liberal MLA Giulia Jones, and amended by Labor’s Dr Marisa Paterson.

The lack of movement on the group centre has been the source of simmering frustration within the growing Molonglo community, which is struggling with a lack of community facilities and shops.

Forum convenor Ryan Hemsley said the release of the plan represents a significant milestone in the development of Molonglo Valley.

“For the first time, residents have a clear picture of how shops, community facilities, parks and other critical services will be delivered during the coming years to serve the current and future needs of the fast-growing Molonglo Valley community,” he said.

“The feedback from the National Capital Design Review Panel has clearly had a positive influence on the design of the centre, with the latest plan featuring more green space, better resolved transport links, and clearly identified locations for future facilities.”

Mr Hemsley said the forum will be talking to the community about the plan during the next two months, starting with an online community conversation this week.

“As a community, we really need to wrap our heads around this crucial document,” he said.

Putting aside differences regarding the two-year delay, Mr Hemsley said the forum is looking forward to working with the ACT Government and local MLAs to provide community feedback on the plan, ahead of it being incorporated into the Territory Plan in 2022 via a Technical Amendment process.

“You only get one shot to properly plan a town centre – everything afterwards is just tinkering,” he said. “With this plan, we have a golden opportunity to avoid repeating past mistakes, and develop a place that people genuinely care about.

“When the new high-level bridge [over Molonglo River] is complete and this centre is up and running, Molonglo Valley will be well on its way to becoming a thriving, well-connected community with a beating heart.”

The ACT Government confirmed in the Legislative Assembly that the first land release will take place in 2023-2024 as per the latest Indicative Land Release Program. 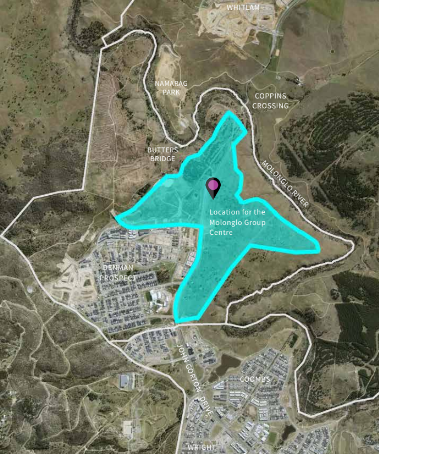 The Environment Planning and Sustainable Development Directorate will engage with the forum during the coming months on the Draft Concept Plan and proposed approaches to ongoing consultation.

The steps to finalise the Draft Concept Plan and adjust the Territory Plan to include a Precinct Code to guide estate development planning could occur in early 2022.

Mr Gentleman, recognising how the delay had upset the community, said the Draft Concept Plan demonstrates the breadth and complexity of planning that is needed to bring greenfield sites – and in particular a new group centre – to reality.

“The Draft Concept Plan is the result of considerable investigation, analysis and planning work,” he told the Assembly.

“The Molonglo Group Centre has a fantastic natural asset at its door with the Molonglo River corridor. The river corridor creates a place unlike any other centre in the Territory.

“The Draft Concept Plan puts people first and is created with our changing climate in mind, with a focus on sustainability and comfort for the community through living infrastructure, walkability, green corridors and easy access to public transport into the future.”

Mr Gentleman stressed the community’s role in the development of the group centre.

“The Draft Concept Plan for Molonglo Group Centre and surrounds creates the basis for an ongoing collaboration with the community to deliver a great place,” he said.

“We look forward to working closely with community stakeholders, with conversations proposed during the summer with the Molonglo Valley Community Council and key stakeholders.”

Where do we find the new concept plan for Coombs group Centre?
residents might now have their concerns taken into consideration. When & where are the Community meetings to be held?

Justo Justo - 13 minutes ago
Jimbo Lambert I have driven it for 30 years also , the new speed limit was announced throughout Canberra for months, there re... View
Jonathan Hunt - 3 hours ago
If there’s a record amount of fines.. the limit is clearly too slow View
Ian Fitzgerald - 3 hours ago
Make it proportional to the value of the car.. then I’d be sorted. View
Food & Wine 20

TheSilver - 4 hours ago
I posted references here: https://the-riotact.com/getting-omicron-has-been-way-worse-than-i-expected/527040/comment-page-2#co... View
phydeaux - 5 hours ago
I doubt the present value of the QR system compared with its original use, although I am extremely confident it never did hav... View
phydeaux - 5 hours ago
TheSilver, I recall you have previously been asked for the references for those studies but I do not recall seeing a response... View
News 1

It’s official: Molonglo to get its own community council

@the_riotact @The_RiotACT
. @GreenCaffeen is already here in the ACT, but now you can use your environmentally friendly #cup in Queanbeyan, Bungendore, Braidwood and beyond https://t.co/oomlltUS5r (58 minutes ago)