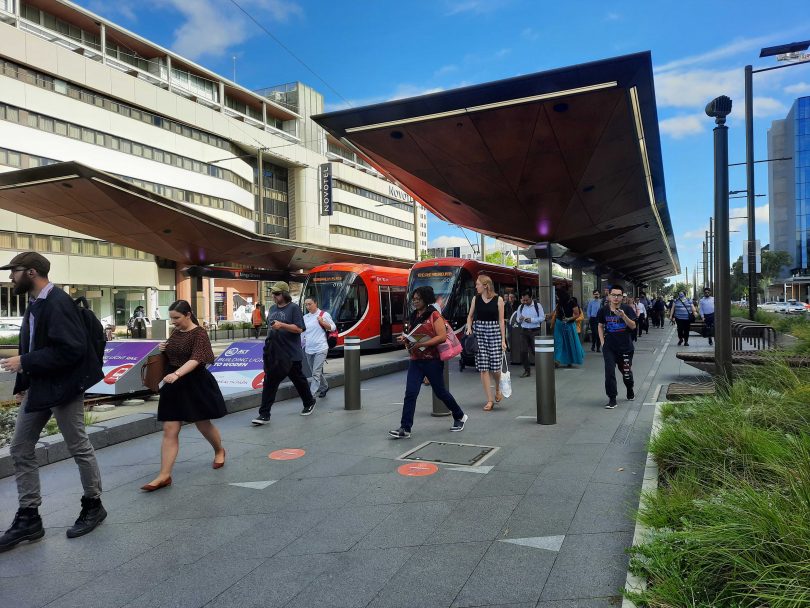 Traffic on your drive to work could soon be flowing more easily thanks to some new smart technology being installed on Canberra’s roads.

Intelligent transport monitoring technology will soon be put in strategic locations across central Canberra where disruption and congestion are common.

This will include new intersection cameras and Bluetooth sensors which can feed traffic insights back to the central Traffic Operations Centre at Fyshwick.

From there, real-time information about traffic flows can be transmitted to the public via social media and radio.

Active monitoring of the network will also make it possible for crews to respond more quickly to accidents or issues before they cause significant congestion, Minister for Transport and City Services Chris Steel said.

“Providing reliable information in real-time will mean commuters can make informed choices before or during their trip.

“This might mean choosing a different route, travelling at a different time or jumping on public transport.” 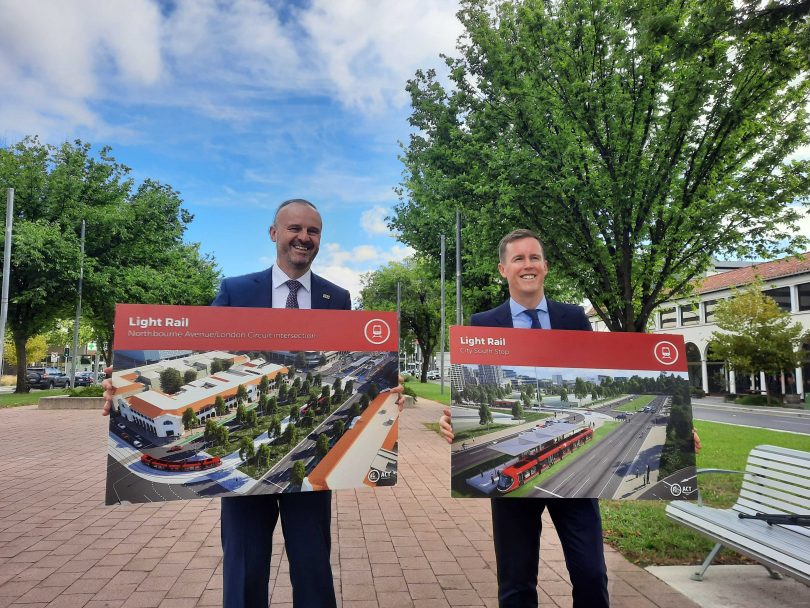 Minister for Transport and City Services Chris Steel (pictured with Chief Minister Andrew Barr) says the government is committed to being upfront with Canberrans about light-rail induced disruptions. Photo: File.

Mr Steel said the additional technology would assist commuters as the next phase of light rail construction gets underway.

Commuters have previously been warned to expect years of disruption as traffic capacity on Commonwealth Avenue drops by 80 per cent.

Lane closures and works on Commonwealth Avenue will mean traffic has to be diverted via Kings Avenue, Parkes Way, Tuggeranong Parkway and Monaro Highway.

Work is already underway on a new Woden public transport interchange and construction on raising London Circuit is expected to commence around the middle of the year.

Raising London Circuit will involve the demolition of the cloverleaf ramps and overpasses and result in road closures, including on London Circuit.

Callam Street in Woden has also been shut to traffic as major works commence on the town centre’s new public transport interchange and light rail stop.

Other commitments include a promise to install traffic lights at the Coranderrk Street roundabout to improve traffic flows from Parkes Way for people accessing the city from the southside.

Road cameras will also be installed to manage the intersection and the lights can be timed. Last year, Mr Steel said he hoped these changes would help to better regulate this “notoriously bottle-necked roundabout”.

The government is also planning to temporarily signalise the northern side of Vernon Circle to allow safe right-turn movements onto Constitution Avenue and London Circuit for buses and other vehicles heading northbound.

The government has formed a Disruption Taskforce to manage these impacts and is encouraging as many people as possible to use public transport during this time.

To assist with this, a new park and ride facility at Beasley St in Mawson will also be put in place and 70 existing car parks will be converted to park and ride spaces.

Construction is now underway on a new footpath link to the Rapid routes on Athllon Drive and lighting upgrades to increase safety are also planned.

Mr Steel has long said the government is committed to being upfront with the community regarding the upcoming delays.

Light rail stage 2A will extend the line to Commonwealth Park.

Anything on a bridge or bridge expansion to get the light rail over LBG. This is a major reason stage 2 became stage 2A and 2B yet nothing still. Must be waiting for another Federal Election.

Yes it is good to be upfront about the delays when they will be blatantly obvious to people going into the city. The plan to push workers onto public transport or punish drivers through reduced parking and increased parking fees worked. After working in the city for years I retired. Now I don’t drive into Civic, weave through all the traffic and continuous construction, nor pay large parking fees and I don’t spend my money there. Comrade Barr you get nothing.

Once is all said & done,& the LR is finally finished,things are forgotten quite quickly.Everyone moves on.As the city grows,it will actually be quite good for the future.

“Disruption Taskforce”. A taskforce to cause disruption?

haha .. I’ve just grabbed myself a box of popcorn 🍿

This is the greatest waste of time, money and effort since the beginning of mankind. Our children’s children will still be waiting for Barr’s buffoonery to be completed. He and his merry green cohorts should be ashamed of themselves by spending an astronomical amount on this completely useless venture while roads, schools and hospitals are in need of repairs and updating.

Modern technology could be used to all but eliminate disruption to traffic for the public transport upgrade of Commonwealth Avenue. This could be done by using modern trackless battery powered trams. These would not need the road to be dug up, overhead cables to be installed, or bridgework. They would just need a bus lane painted on the road.

I’m Seen trackless battery powered trams in Norway. They so look like a bus. So why spend such a huge amount of money. Just give us EV buses and we can save five years of major traffic disruption. I’ve already made it my objective not to shop and go to Civic as little as possible. Why risk getting a traffic fine & paid such a huge amount on parking. Aldo Barr has cut out the rapid buses In my area unless I walk 850 m to the bus stop that’s okay but I’m 66 now don’t know if that’s possible for another five years specially with shopping or luggage. Dreadful
Infrastructure planning.

No need for road worlds is one of the misconceptions about trackless trams.

One of the issues with them is they track the painted line so well they wear ruts into the road. So before painting that line the road needs to be dug up and reinforced.

Want some proof of this have a look at many bus stops where buses all pull in over the same bit of road, you see the ruts from the wheels.

You also need to dig up the road to build the stops as trackless trams generally don’t make do with a bunker style shelter. Most BRT systems I’ve seen still have dedicated light rail style stops.

And one of the other issues with the whole tram vs bus vs trackless tram is both the latter don’t provide the same capacity not just on the vehicle but frequency of operation too. They tend to bunch up.

How? After monitoring, it will be sent to social media and radio.
Awesome when you are driving … try reading act gov Facebook !
Or how about in your average 20 minute drive to work, tuning in for the news slot on the radio every hour.

How about a realtime feed into an app? C’mon CBR it’s past sleepy time.

Or how about if your drive is 20 minutes you consult the above sources before you leave.

Google and apple maps are also very good so too is just pure common sense like how we did it in the good old days. What none of them can predict or show is last minute jams due to accidents and the like, but neither can anything else in true real time. And with a 20 minute commute you would be most likely be committed to your route anyway.

Even if the light rail were not being built, the whingers would find something to whinge about. You could provide free helicopter taxi services to them for the duration and they would still complain. Just build it and ignore them.

It was much the same in the Sydney CBD.Once finished it will be really good,but it is what is ahead what is going to cause the most headaches.Glad it won’t effect me @ all.