Concerns over equalisation of the AFL Canberra competition 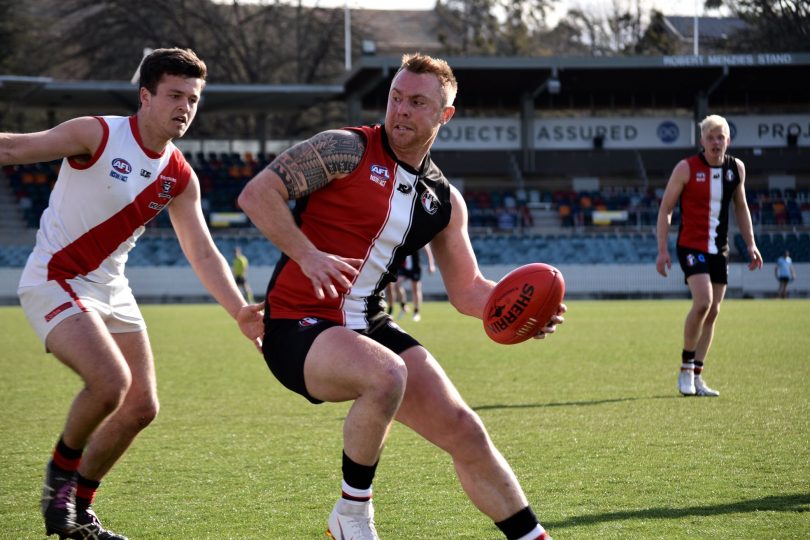 Veteran Ainslie coach Chris Rourke says he remembers the days when he would be excited around this time of the year. This is the time when Canberra clubs start signing talented new recruits for the following season.

Sadly, he says those days appear to be over. Canberra teams face the prospect of being unable to match it financially with a number of country leagues, but they also face a battle to keep their existing players.

Ainslie has won the competition for the past three seasons in a row. Rourke says, at the moment, any one of the top four teams; Ainslie, Belconnen, Eastlake and Queanbeyan, are capable of beating each other. As such, he questions the need to put in place any barriers.

Next year, in an effort to bring more equity to the AFL Canberra competition, there will be a salary cap of $100,000 per club as well as a player points system.

Not all six clubs would be in a position to go anywhere near the $100,000 limit, but it has the potential to stop teams, such as Ainslie, bringing in players straight out of the AFL into the AFL Canberra competition.

This year there was a soft cap of $80,000 per club. AFL Canberra Community Manager Garry Lawless says the lowest amount spent by a club was $25,000 with the highest being well over $80,000.

Mr Lawless says money shouldn’t be the major incentive to play in Canberra.

“It’s more about the environment within the club. Payment to play shouldn’t be the primary incentive. Paying every player to play is not the right philosophy for community football.”

In the past, some Canberra clubs have been able to bring in players from the AFL, paying them around $45,000 a season as well as a job and a home. Next season no club will be able to afford it if one player takes up half the salary.

Rourke says the league benefits by having the likes of Ken McGregor. Not only do they bring professionalism but also players lift around them and thus the standard of the competition.

Garry Lawless questions this assertion; “In terms of ex-AFL players lifting others to the next level, there is already a pathway through the Swans and GWS Academies.”

The player point system is also designed to bring equity. Next season Ainslie will have a limit of 33 points, which is determined by where the player has played previously. For instance, an AFL player is worth six points; VFL, five; NEAFL, four; and a local player, one point.

The plan is to make the likes of Tuggeranong and Gungahlin more competitive and bring Ainslie back to the pack.

Rourke, who is heading for his 13th season coaching in this league after being recruited from Country Victoria, says he has real concerns about the direction the AFL Canberra competition is heading.

“I can’t see the changes improving our standard. Why do we keep lowering the bar? The top four sides are really close. I’m really concerned,” he said. “There is nothing to attract the top players to Canberra. Five or six years ago, Canberra was a powerhouse.”

He says without being able to offer a decent package to top players, clubs will have to rely on players coming to Canberra for work or University.

“You won’t see another player coming straight out of the AFL into the Canberra competition any more.”

Garry Lawless questions whether this is necessarily a bad thing if players are coming here just for the money.

”If ex-AFL players come to Canberra for large amounts of money, they are coming for the wrong reason. It’s not sustainable in the long run. Having ex-AFL players in our league has proven to be a bit hit-and-miss in terms of the impact on the competition.”

Ainslie players will be paid around $250 to $300 a game for 15 regular season matches, but nothing for finals.

Rival leagues, such as the Riverina and Ovens and Murray, that apply fewer restrictions, have the ability to pay players more. Rourke says they have already started approaching players in the AFL Canberra competition.

It could end up resulting in equalisation being achieved with the top AFL Canberra clubs losing their leading players to other leagues. This though has the potential to diminish the standard. AFL Canberra remains confident the steps taken to equalise the league will actually lift the standard with all six clubs being competitive.

Only time will tell.

Feedback - 56 minutes ago
The article mentions that 'The path out will resemble last year’s easing but will include working from home for some time t... View
whatwik - 2 hours ago
With the school holidays upon us, spare a thought for children and parents (and grandparents!) in Cowra, which was among area... View
Opinion 49

Tom Worthington - 57 minutes ago
Not "Man the torpedoes", it will be: "Activate the AI in the Uninhabited Underwater Vehicles". ;-) More seriously, Australia... View
chewy14 - 57 minutes ago
JC, I've repeatedly said this isn't mainly about the hardware although it helps. And why can't we strengthen our non military... View
chewy14 - 1 hour ago
Won't be fooled, I said it helps to protect Australia. But only partly through the hardware, the bigger benefits come from th... View
News 2

@The_RiotACT @The_RiotACT
Cold weather is sweeping in again across NSW and ACT, potentially bringing #snow, #hail, and damaging #winds with it. Here's what you need to know https://t.co/SiTWclpxRK (31 minutes ago)