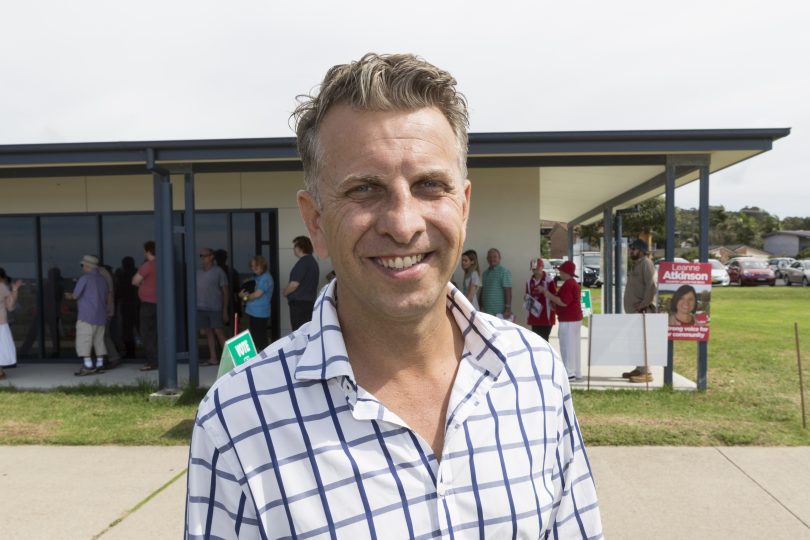 The Liberal Party has endorsed former State MP and NSW Cabinet Minister Andrew Constance as its candidate for the South Coast seat of Gilmore in the coming federal election, and he is promising a positive, community-based campaign.

Mr Constance, the last candidate standing after his three preselection rivals withdrew from the field, will throw his considerable personal following at retaking the federal seat.

Labor’s Fiona Phillips won Gilmore in 2019 with 52.6 per cent of the vote after sitting Liberal member Ann Sudmalis retired, a 3.3-point swing away from the Liberals.

Mr Constance rejected suggestions that he would prefer to keep Prime Minister Scott Morrison and other ministers out of the Gilmore campaign, despite lauding the benefits of working in a “bipartisan and caring way” in his endorsement statement and the harsh reception Mr Morrison received during the Black Summer fires.

He said he will focus on local infrastructure such as the Nowra bypass, the port of Ulladulla and the expanding tuna export industry there, and supporting the area’s tourism, education and community needs.

“That’s the type of stuff that is really important in terms of bringing those key ministers here, regardless whether people agree with them or not,” he said.

“We’ve got to be able to support our community leaders and industry leaders to get the financial support they need to continue to build on the great things we have.”

Mr Constance said he believed in the value of working in a bipartisan way, for example, as he worked with the Labor Gillard Government delivering the NDIS as a State Minister.

“Even during the fires, I had to work closely with [former Bega mayor and now Labor Member for Eden-Monaro] Kristy McBain,” he said.

“We’ve got a community that has experienced the best of bipartisanship in Gilmore – we saw that with fire survival and recovery, seeing it with the pandemic, people wanting to reach out and help.

“I think there is an incredibly important principle at work there. I’ve seen great outcomes for the community when we all do pull together.”

Mr Constance said the community was not interested in political brawling but results.

“The community is not going to appreciate a stand-up political fight between me and the Labor candidate,” he said.

“They’re going to want to see positivity, particularly at a time when everyone is so susceptible to the impact of the virus and ongoing recovery after natural disasters.

Mr Constance, who acknowledged his mental health issues during and after the fires, said there were still many matters related to the fires that still needed to be acted on, including formal analysis of the trauma people had suffered and were still experiencing.

“It’s key that the government understand that beyond mitigation measures and land management practices, we’ve always got to understand wellbeing and the impacts on people and the trauma people are suffering,” he said.

“We don’t handle trauma management well in this country. I want to ensure that through my advocacy, no one is left behind. Unfortunately, there is still a lot of hidden pain that is going on.”

Mr Constance will be campaigning heavily on his experience as a local MP and Minister to deliver projects and services for Gilmore.

“It’s a very important time to be positive, and that is my intention every day of the campaign,” he said.

Are there trains in Gilmore?

Is this the same bloke who stuffed up the trains & boats & trams & buses & everything else he came close to?

The Riot should be unbiased with any political party. All i see is Liberal news. Not good Ian Bushnell

I’m more puzzled by ANYONE volunteering to serve with the LNP at the federal level.

Polling says he will be rejected! The only reason he survived in Bega was no trains for him to bugger up.

Does Ian ever write an article that isn’t a love letter to the Liberal Party?

If I was Constance and wanted a serious chance at flipping a seat, I wouldn’t want Morrison anywhere near the campaign.

Jackson Wardman Nope. He’s always writing about how much he loves them, then says he’s an independent.

Hypocrite! During the fire’s in 2019-20 he publicly declared being over politics and would be getting out. Typical pollyspeak!

Geoff Richardson its Liberal. What can you do?

I thought he ruled it out a month or so ago.

Brenton Higgins Probably why he’s comfortable with having #scottyfrommarketing around.

Teza Ferreira Fiona has been an awesome member! she seems like she is EVERYWHERE!

Mr Constance may make a useful local Federal member given his experience. I think Mr Constance shouldn’t campaign too heavily on his experience as a NSW Transport and Roads Minister delivering projects and services, given the River Class ferries fiasco (asbestos on four of the ferries delivered for testing and the passengers having to clear the upper decks to go under particular bridges) and him imploring commuters to avoid public transport and drive to work on the toll roads due to an over stretched Sydney transport network, and privately owned toll roads proliferating around Sydney, Hardly seems like someone to be considered seriously especially after telling everyone to take a chill pill and telling the NSW Opposition that they “think that I personally build ferries, and I get in my tool shed and I start putting them together but I don’t,” Mr Constance said, sounding like a certain Federal politician not holding a hose. Convenient that he bailed at the same time as the former NSW Premier and the Deputy Premier.

Ferries are just one example. Trains ordered that are years late, don’t fit through tunnels or in platforms, and I assume the lovely Trams with cracks were under his watch too….