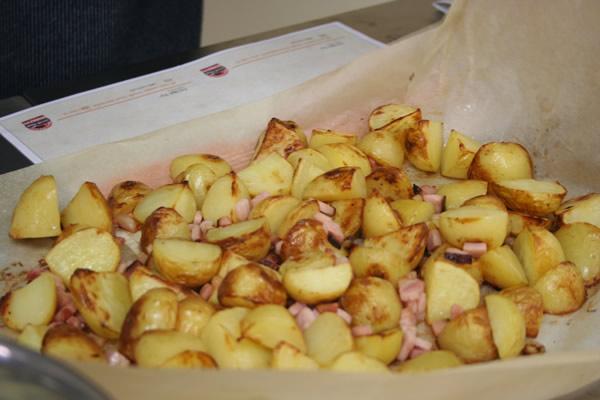 My husband was a great cook when I met him. Sadly – 10 years later, 3 kids and the chaos of life (which generally involves me cooking) he seems to have lost the skill, which puts us into that age old whirlpool of ‘it’s easier to just do it myself than run through the step by step instructions’.

On Sunday, I took him along to a cooking class at Belconnen Fresh Food Markets entitled ‘Cooking for Blokes’. I had mixed expectations I guess and my husband was pretty apprehensive. We arrived at the Market Kitchen, behind the markets near the mushroom playground and were welcomed by ‘Lyonsy’, a tall bloke who has been teaching cooking for the last 8 years. As he went around the room, people advised a variety of reasons for their visit, from wanting to impress a new friend, to ‘wanting to meet blokes’ and the surprising (to me) addition of a man who, after 65 years of marriage, found himself alone and living on lean cuisines.

We were given recipes for four dishes:

None were tough to make, but together you could produce a nice meal. Meat recipes were designed with a BBQ in mind (although OH&S meant we cooked on a hob).

I am pretty used to blokes being pretty uncomfortable around new fellas, unless there is a central theme of interest like sport or music etc. Sorry, I know that’s clichéd, but from my experience mostly true – hands in pockets, awkward shifting of feet etc. And yet, for this – people got in and worked pretty well together. The group of 12 were split into four and given two dishes each to prepare with a vision of coming together in an hour to share the meal. I must confess at this point I was thinking ‘he’s dreaming’- organised chaos seems a gentle reference. But come together it did. Potatoes went into the oven to roast (I had never thought to roast potatoes for a salad, but a hot tip of the day ‘if they’re roasted it’s harder to stuff them up’ will be used in future), marinades were prepared and almonds roasted (a slow process taken on by my exceedingly patient husband). 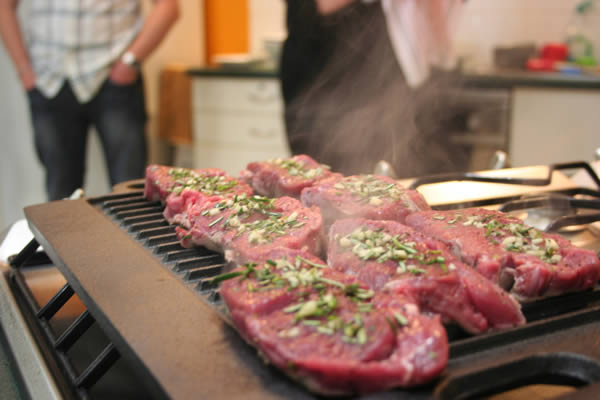 The experience of the group ranged from ‘not entirely sure what a chicken thigh looks like’ through to reasonably capable cooks seeking something different to do on a Sunday morning.

The instructor himself, ‘Lyonsy’, found himself taking on cooking after being given the choice by his wife whether to bath the kids of cook dinner. Dinner won out as he could have a beer and watch the TV. His style was relaxed but knowledgeable and the participants responded.

My only criticism would be in preparation. There were a few shouts of ‘does anyone have a wooden spoon/measuring cup etc’ and although resolved quickly, increased preparation would smooth the cooking journey. The Market Kitchen is in the process of moving some of its classes to hands-on instead of demonstration so I guess some early headaches are to be expected.

My husband came away having enjoyed the experience and we both really liked the ‘vibe’ of the group.

Overall, it was a pretty nice way to spend a morning and lunch was delicious!

The Market Kitchen offer a variety of cooking classes covering a range of cuisines including French Patisserie, Sausage making and Cupcake decorating for kids. Details can be found here. 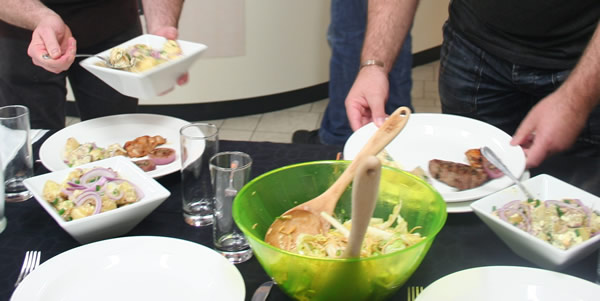 13 Responses to Cooking for Blokes
Filter
Showing only Website comments

Canberra’s best cooking teacher is a guy called Rene aka Baron (sorry don’t remember the last name) and he can be contacted at kitchenrevivalchef@gmail.com . I went to a series of small private group sessions at a friend’s house and we learnt skills, methods and procedures rather than flogging a tired recipe like most classes. Most of the guys in the group have continued with private lessons and one is soon opening his first restaurant.

Yes this doesnt sound at all patronising.

Gosh darn us blokes and our slacker ways. If not for the little women how would we survive?

Thanks for the feedback everyone!

We are currently working out a series of “Cooking for Blokes” and “Cooking for One” classes at Belconnen Market Kitchen, keep an eye out on our website – http://www.marketkitchen.bffm.com.au

In the mean time, if you have any suggestions about what types of cuisines and techniques you would like to learn we would love to hear from you!

Is that astroturf on the steaks?

I just did a double take – I thought it read “looking for blokes” and I thought, hell yeah, I’m looking for a decent bloke.

Then I see it’s cooking for blokes and thought, that’s even better – looking for a cooking bloke.

Mr Jess and Master Jess both need this course.

So, any plans for them run classes for all those women who can’t cook?

Don’t they do “home science” at school anymore?

So, any plans for them run classes for all those women who can’t cook?

Good to see. Men should know how to cook, and should use this knowledge regularly. Expecting your wife to do it all the time (or even worse, throwing a pre-cooked meal in the microwave) is disgraceful. This is the 21st century – we’re not hunter-gatherer neanderthals.

The only thing missing from that first photo is a beer.

Yeah, but what about the rabbit food in the other photos?

The only thing missing from that first photo is a beer.

Great stuff, anything that gets blokes into the kitchen is a good thing

Beck Bianco - 2 minutes ago
Probably because Canberra is no longer affordable so people move to drivable towns outside of Canberra View
Michelle Preston - 23 minutes ago
Property prices in Yass are over priced. View
Elyse Crawford - 50 minutes ago
Amanda Adams still the same cycle, those tenants would then be homeless. View
News 7

Notes from the kitchen garden: when does spring vegetable planting start?

@The_RiotACT @The_RiotACT
Cavalry mascot Sarge is turning up the heat on his annual 10 km walk to raise $10,000 for Lifeline in Canberra. Find out how you can help https://t.co/CktjV9PbUV (22 minutes ago)