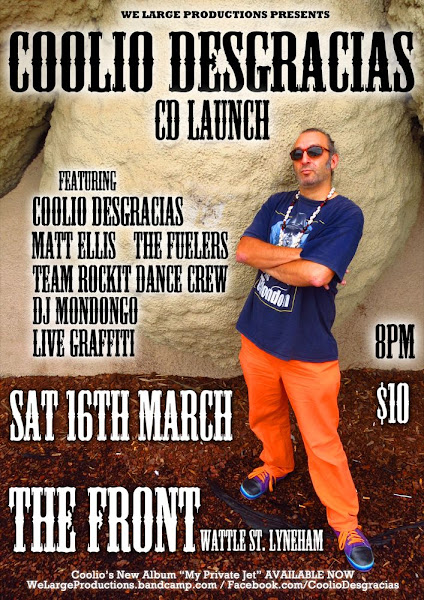 Coolio Desgracias is the hip hop alter ego of musician Simon Milman, better known for his work as bassist with Los Chavos, The Ellis Collective, Fats Homicide and many other bands. His modus operandi is to freely explore the fields of hip hop, r n b, funk and beyond, much like his hero Andre 3000.

The story begins in 2009 when Coolio dropped his self-titled debut album, which garnered praise from The Canberra Times’ Kate Kingsmill and was launched in one of the early highly successful Canberra Musicians Club events. The record featured some of Canberra’s finest musicians contributing to such songs as ‘Girl Crazy’, ‘My Embargo’ and ‘Let’s Meat’.

Chapter two was the retrospective collection ‘Tha Cheesedome Era’ (2010), featuring recordings made during Coolio’s attendance at high school, college and university. These formative years were spent with ear googles firmly attached to his domepiece, and this is evident in the grooves of ‘Suckas’ and the stop start stutter of ‘Sleepwalking’.

Fast forward to 2012 when Coolio drops his first true masterpiece, ‘My Private Jet’. His most ambitious release to date, it features 25 guest musicians on horns, strings, rhymes and more. The song writing and arrangements are more diverse and mature than ever and the production from We Large house producer Sam King is peerless.

Available since Corinbank last year, the official launch of the album will be on Saturday the 16th of March at The Front Café in Lyneham. This promises to be an amazing evening of rhyming, turntablism, breakdancing, graffiti art and more!! Coolio will not only perform songs from the album but also preview some brand new songs. Also performing will be Matty Ellis, The Fuelers, Team Rockit Dance Crew and DJ Mondongo. The evening kicks off at 8pm and entry is $10.

MERC600 - 17 hours ago
Today the local paper today reports ''The number of patients in Canberra Hospital has dropped in the past day but three remai... View
me heretoday - 18 hours ago
I understand in times such as these that 'needs must' but in all honesty I do not want to die in a tent on Garran oval in the... View
1