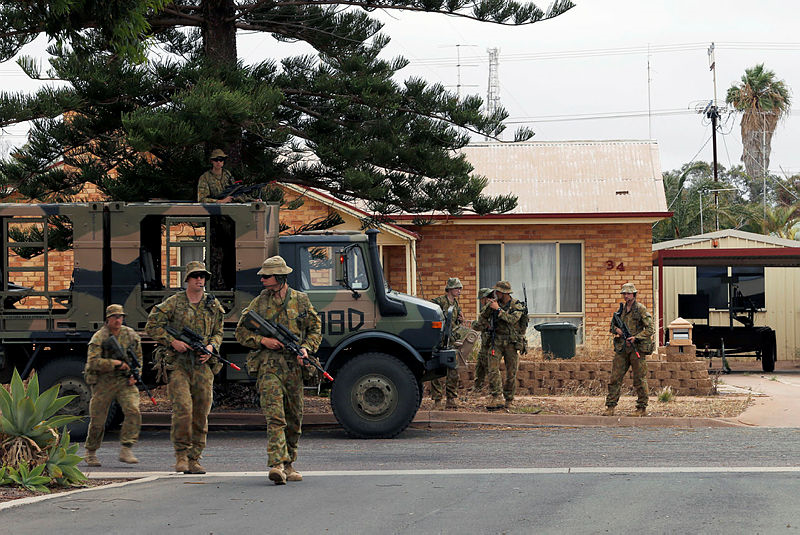 Training in an urban setting like Cooma is valuable experience for senior cadets from RMC Duntroon: Photo: ADF.

Something extraordinary has been thrown into the mix of daily life in downtown Cooma – 100 senior cadets from the Royal Military College Duntroon on a training exercise.

The cadets arrived in the middle of last week and will stay until June 1; residents have already been witness to armed skirmishes in local streets and paratroopers descending from the sky. 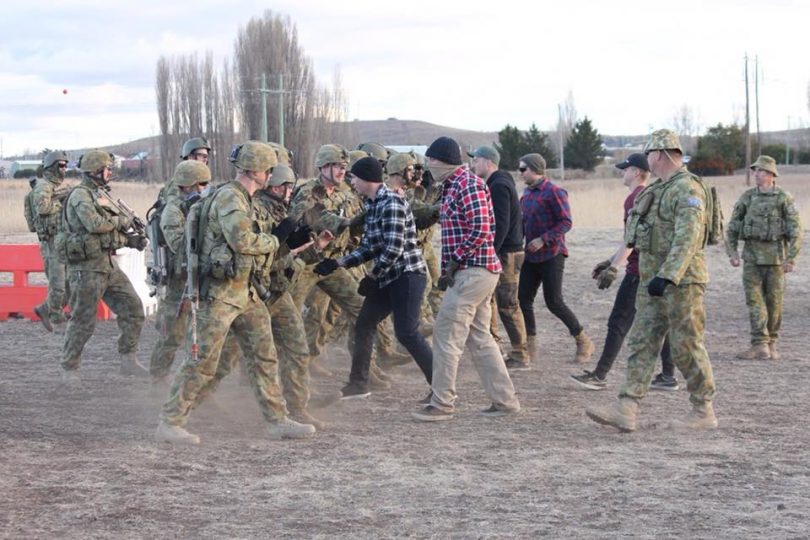 Snowy Monaro Mayor John Rooney says there is a storyline the troops are working to but he is reluctant to go into detail.

“The cadets will be doing stop and search checks on vehicles and be conducting drills that look to defend key council and public assets – water, sewerage, electricity from mock attack,” he says.

Pretend battles between cadets and Defence members role-playing as enemy forces will continue to take place daily between 6 am and 11.59 pm. Peace and quiet will be the only casualty; while the guns are real, the ammunition is not. 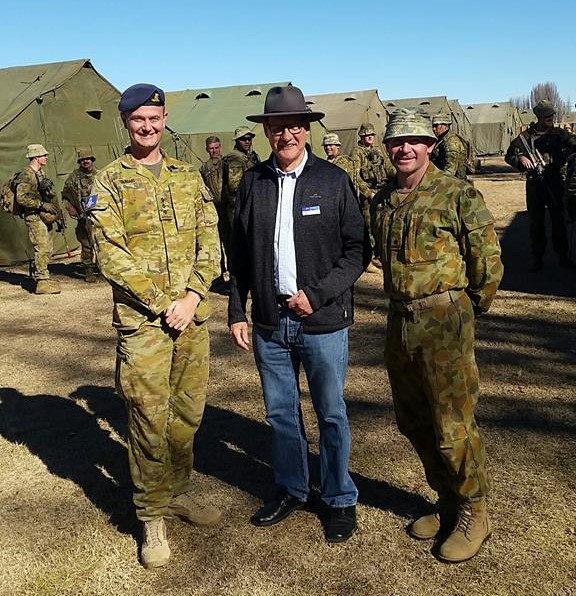 Some residents have expressed concern and been startled by the presence of armed, active troops but Cr Rooney says the exercise is valuable experience.

“This is essential training that these senior cadets need so that when they become officers they can discharge these peacekeeping duties professionally and competently overseas when needed,” he says.

“The whole point of this exercise is to train these cadets in a real civilian environment in how to manage a security situation in a populated urban area.

“If you are in a hurry and get pulled over for a stop and search check, you don’t have to do it, they’ll wave you through with a smile.” 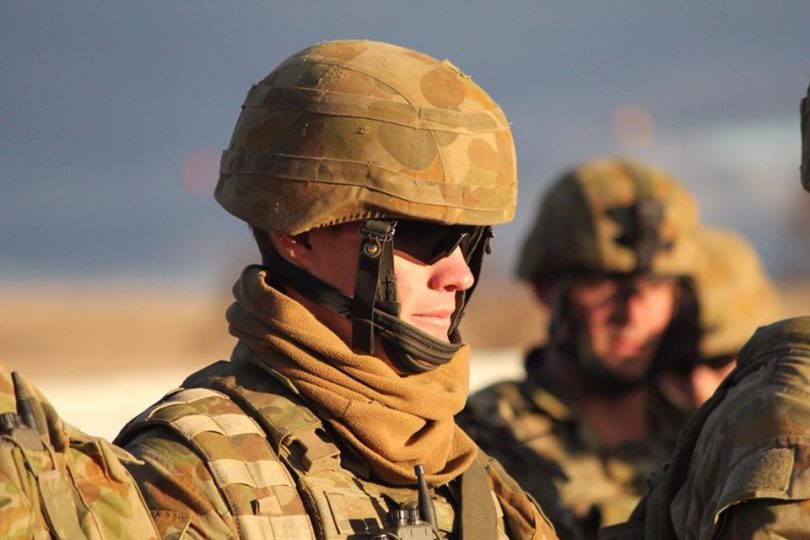 Senior cadet Sutton, one of the 100 student soldiers in Cooma at the moment. Photo: RMC Duntroon Facebook.

One of the key learnings for the student soldiers is how to interact with local agencies like police, health, and council and deal with the anxiety of the general public in a patient and respectful way.

“Interacting peacefully with the good guys is just as important to this exercise as maintaining security against the bad guys,” Cr Rooney says.

The Mayor says Cooma was identified some months ago as an ideal realistic replication of an overseas peace-keeping deployment.

“The Army conducts these exercises every six months in regional towns all over Australia.”

“You need a certain size population, they need infrastructure facilities to defend, I think this will be really good for Cooma,” Cr Rooney says. 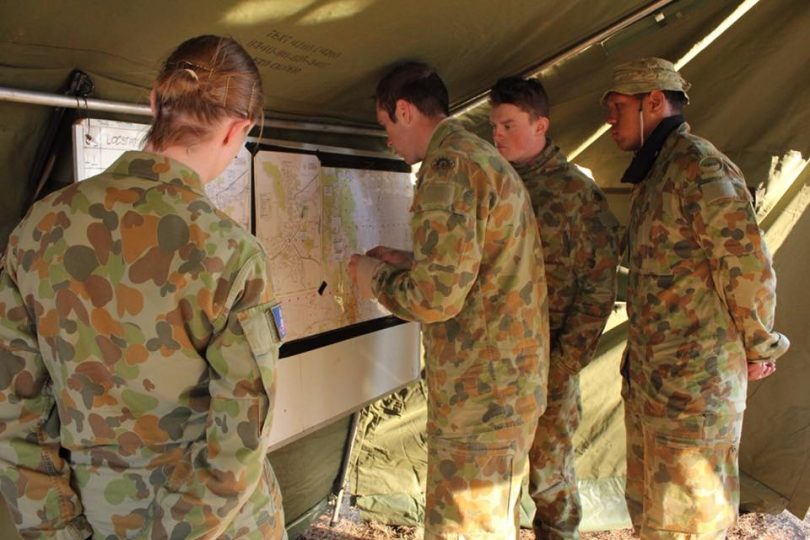 Cooma Racecourse has been turned into a home base and operational HQ for the exercise, residents in affected streets have been letterboxed and Snowy Monaro Regional Council is providing regular updates on troop movements and daily plans via their website.

Tomorrow (May 22), cadets will conduct patrols into Cooma taking in the area around Monaro Panel Beaters, Pine Ridge Reserve, and Mittagang Park.

Between 12 pm and 6 pm, the Royal Military College Duntroon advises that weapons and blank firing are expected in or around the Old Gym at Thurrung Street, and the Cooma Gaol, before moving to Monaro High School, Pacific Lodge, and a car crash scenario on Polo Flat Road tomorrow night.

“These men and women are very friendly, respectful and polite – go and say hello to them, they are your troops,” Cr Rooney says.

“I encourage people to interact with the cadets, you will leave reassured by the professionalism, skill and diplomacy of our troops.” 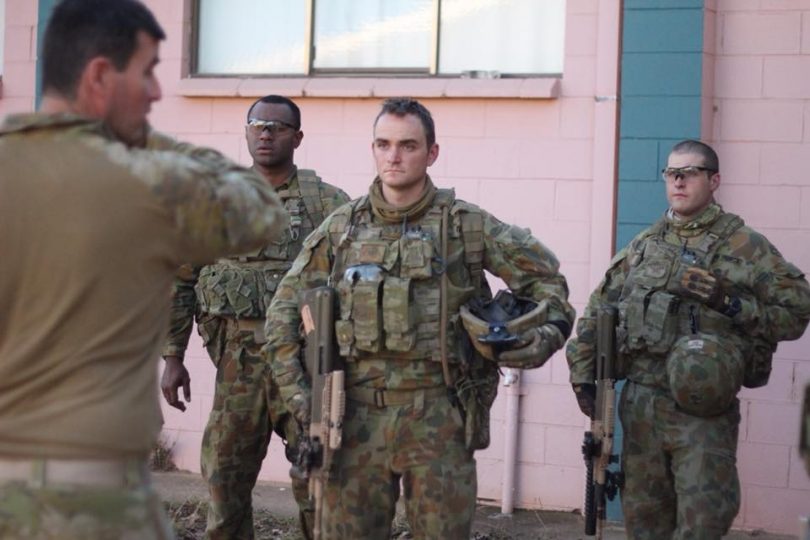 The Mayor says he is pleased that a number of social events have been planned at the Cooma Ex-services Club, but that he also hopes the visiting officers and cadets will drop in on local cafes, hotels, and shops during their say.

“This isn’t so much an economic benefit to the local community but a security benefit – what price do you put on security? What price on freedom? What price on democracy?” Cr Rooney says.

The Royal Military College Duntroon is inviting the community to an open day this Saturday (May 26) from 9 am to 1 pm at the Cooma Railway Station. 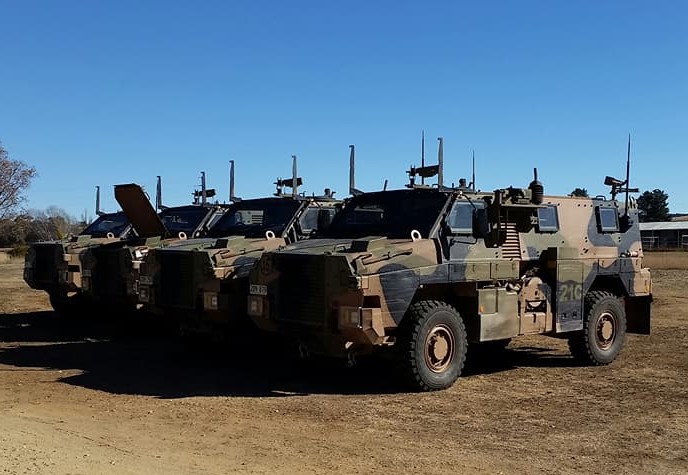 George Watling - 4 minutes ago
Marc Edwards Spot on Marc. The best way to deal with congestion is decentralize workplaces. If everyone is travelling to a ce... View
Community 8

Mazzie Woodward - 2 hours ago
Thanks James Milligan MLA and Leanne Castley MLA for all your advocacy on this issue - keep up the pressure as I’m sure thi... View
Opinion 5

Linda Stapleton - 8 hours ago
Just look at the size of that Rhubarb...wow View
show more show less
*Results are based on activity within last 7 days

Rix Wright’s Shearer finds a home in Cooma – “It’s really great to see it in a public space.”