Coombs and Wright have suffered from a lack of community infrastructure. Photo: ACT Government.

Coombs and Wright residents are hoping the sale of the last remaining mixed-use and community zoned sites in the Molonglo suburbs will yield better results for the community than previous efforts that have left them with the empty shell of the Coombs shops and a community centre in name only.

The Suburban Land Agency is looking for community input into how these four sites can be developed and serve the suburbs in a month-long consultation process involving a community panel and online survey.

Sites A to C are located on John Gorton Drive, near the commercial and residential development of Koko Molonglo and the Coombs shops, and allow for the construction of residential, commercial and community-zoned services or infrastructure.

Site D is surrounded by residential homes in Wright and zoned for community facilities, infrastructure or services only.

The SLA says that it recognises the community’s desire to see more community-focused facilities, services and infrastructure provided.

It is seeking volunteers for the representative panel which will come together for two workshops on Saturday, 13 and Saturday, 20 March from 9:30 am to 1:30 pm and will include about 12 community members and stakeholders. 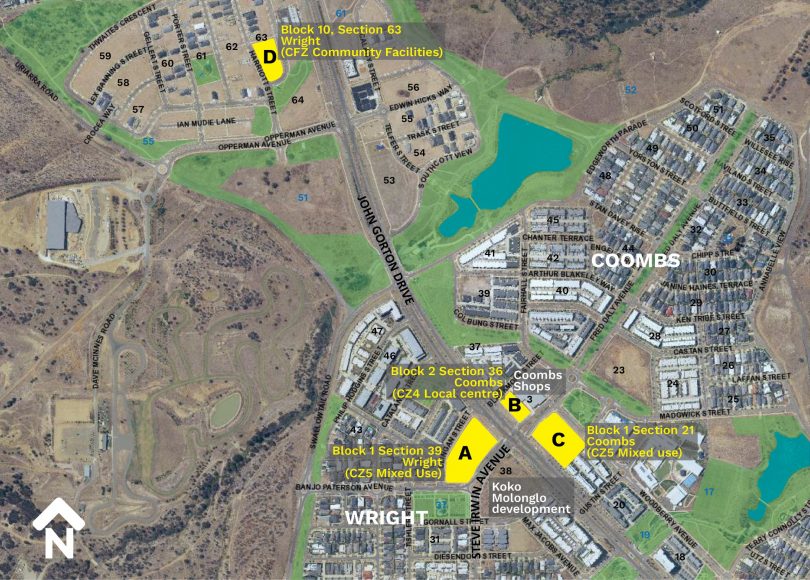 Interim spokesperson for the Molonglo Valley Community Forum Ryan Hemsley said it appeared the government was taking a different approach to these sites after almost all of the previous commercial land releases ended up as residential developments, except for the infamous Coombs shops and the Koko Molonglo project in Wright.

Mr Hemsley said it was clear a hands-off approach in Coombs and Wright had not worked, and the government was now looking at being more involved to ensure better outcomes.

“We are looking forward to the Suburban Land Agency pursuing an alternative means of selling the sites, not just selling them to the highest bidder, but looking at what levers they can pull to get the best overall outcome for the site in terms of the final development outcome but obviously what community benefits can be provided,” he said.

He said the fresh approach might not fix the Coombs shops but could prevent a repeat of that situation.

Mr Hemsley said the sites needed to be financially viable for the developer, but there had to be a middle ground between just throwing up a bunch of apartments and the site remaining vacant for years and years.

He said the remaining four sites were critical to the future of the area, and he called on the community get involved.

“We really do need to get as many people in Molonglo on to this process as possible,” he said. “There could be fantastic ideas out there in the community.”

He hoped the government would reach out to the Koko developer to see what won’t be included on that site, so there would be complementary not competing uses around that key intersection of John Gorton Drive and Steve Irwin Avenue.

Coombs has also endured a barely used privately owned community centre that many groups cannot afford to use.

Mr Hemsley said the suburb continued to suffer from a lack of community infrastructure and even the community forum had struggled to find an appropriate meeting place to discuss issues.

Applications for the community panel close on 8 March. The consultation period closes on 26 March.

To learn more and take the survey, go to the YourSay website.

Submissions can be sent directly to SLAengagement@act.gov.au.

After *seven* years of trying to try to bring pressure on the ACT Government (I was a member of the Wright Residents Group) to create incentives for reasonable community facilities & address poor traffic planning in the Wright/Coombs suburbs, we finally sold up and moved out last year. Best decision we could have made. I hope somehow Wright/Coombs can be resuscitated (and maybe something could be done to address the crime wave?) if anything for the poor folks stuck living there.

Remember when the ACT government acted to make it uneconomic to have a supermarket in Coombs? So much for walkable localities. Now everyone in Wright and Coombs has to own a car just to go shopping.

@the_riotact @The_RiotACT
With work-from-home and workplace flexibility now the norm, businesses are focussed on creating offices that are more homely and enhance staff wellness. Specialist #office space business #Burgtec has some novel solutions https://t.co/I1bnCGMuRp (10 minutes ago)