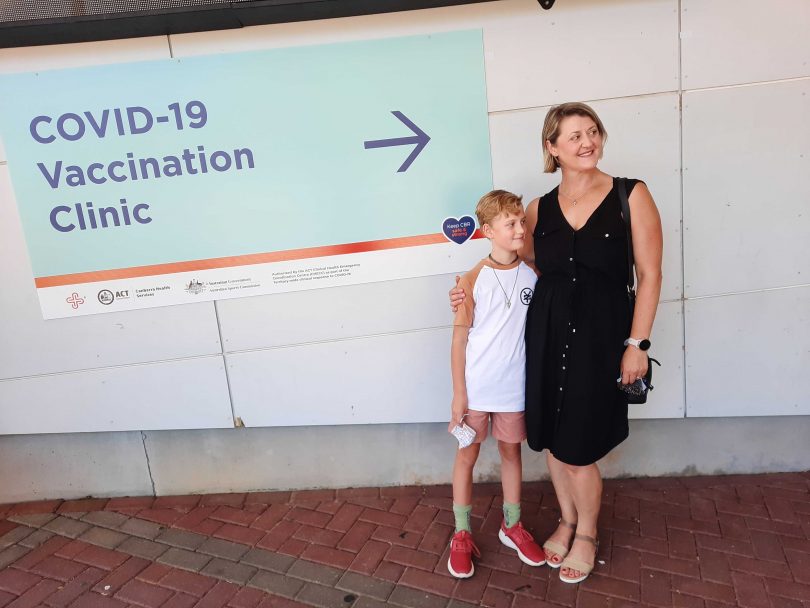 Emma Nikolic and daughter June Tattam at AIS vaccination clinic ahead of vaccination one. Second doses will be administered to children aged 5 to 11 from next week. Photo: Ian Bushnell.

The ACT has recorded 794 new cases of COVID-19 in the last reporting period to 8 pm last night.

ACT Health has also announced the Territory will begin administering second doses of a COVID-19 vaccine to children aged between 5 and 11 from Monday (7 March).

Children in this age group can receive a second dose eight weeks after receiving their first vaccine dose.

Acting Chief Health Officer Dr Vanessa Johnston said any child who received their first dose at an ACT Government clinic would already be booked in for an appointment to receive their second dose at the AIS Arena mass vaccination clinic.

She encouraged parents and carers who had eligible children to get their children vaccinated.

“We know that vaccination is the best way we can all protect ourselves and our children from the risks of COVID-19,” Dr Johnston said.

She was heartened to see such a high – indeed, nation-leading – take-up of first doses in the ACT, with nearly 80 per cent of 5 to 11 year-olds having now received one dose.

“A second dose of vaccine for your child, once the recommended eight-week interval has passed, will ensure they have the best possible protection from serious illness as a result of COVID-19,” she said.

Dr Johnston said the TGA and ATAGI had assessed the paediatric vaccines to ensure they were both safe and effective.

Parents whose children received their first dose at their GP or a pharmacy who wish to book in for the second dose at an ACT Government clinic can do so by phoning 5124 7700 between 7 am and 7 pm each day.

There are 35 people in hospital with COVID and two people in ICU, with one requiring ventilation. Yesterday, there were 39 in hospital.

The vaccination rate for the ACT’s 12-plus population remains 98.6 per cent and 68.7 per cent of residents aged 16 and older have received a booster.

There are now 1000 people in hospital with the virus and 42 people in ICUs around the state.

Victoria has reported 26 deaths overnight and an additional 6545 cases of COVID-19.

There are now 245 people hospitalised with the virus and 28 patients in the state’s intensive care units.