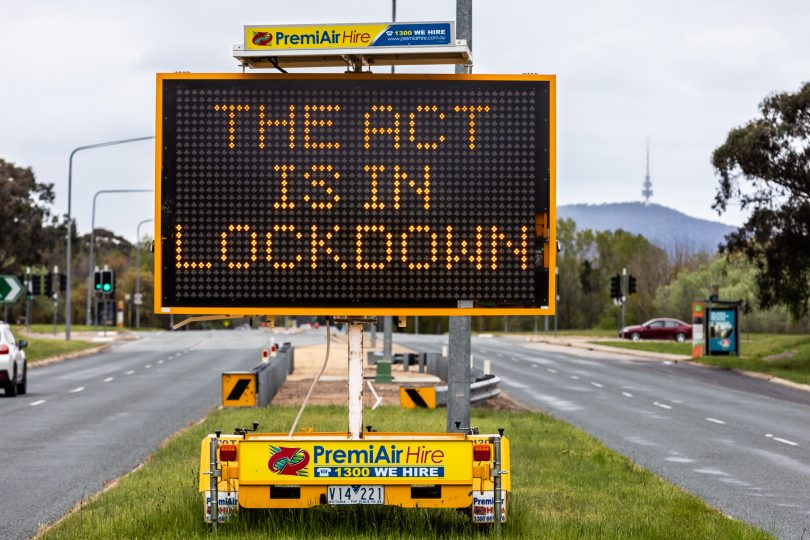 An inquiry into the ACT Government’s COVID-19 pandemic response during the recent outbreak has recommended government review the rollout of the business support payments and consider permanent remote learning for some children.

Overall, the Select Committee on the COVID-19 2021 pandemic response – established a month after the ACT was plunged into lockdown in August 2021 and chaired by Canberra Liberals leader Elizabeth Lee – made 33 recommendations that spanned a number of sectors, including hospitality, retail, education, health, justice and community services.

When the ACT went into lockdown, various business supports were made available, including grants and waivers on utilities, commercial rates and some licences.

After working with small businesses throughout its inquiry, the committee recommended the government undertake a full review of how the Business Support Grants were rolled out. It asked for the findings of the review to be presented to the Assembly by the end of 2022.

The committee has called on the government to commit to making future grant application processes more accessible.

Some business owners have also noted that the government’s new working-from-home arrangements would hurt their viability.

Therefore, the committee said the ACT Government should review the wider impacts of these new work arrangements and look at the impact of contactless trade on the retail sector, particularly in areas where ‘trying-on’ (such as the clothing sector) is commonplace.

Regarding the education sector, the committee said the government should increase funding for additional school psychologists, given “demand is currently outstripping supply and the tail end of COVID-19 stress is likely to last for several years”.

President of the Home Education Association Karen Chegwidden said she’d heard from a group of parents who had enjoyed the remote learning experience and would like to continue.

She was hopeful the protocols around distance education could be relaxed so more people could participate. The committee recommended the government consider the benefits of making remote learning an ongoing arrangement for those who so desired it.

The committee further recommended that the government publicly release all human rights compatibility statements which accompanied every public health direction made.

ACT Human Rights Commissioner Dr Helen Watchirs noted this would allow for more checks, in case there were “unintended consequences that were not thought of when [the direction] was made in a very short amount of time”.

Human rights concerns also led the committee to make several recommendations around the management of COVID-19 in the ACT’s justice system, including at the AMC and for those awaiting sentencing or trial.

READ ALSO: Summernats is back for 2022, as engines start for a new fringe festival event

The release of the committee’s report came as Chief Minister Andrew Barr announced that the Territory’s post-lockdown “v-shaped” recovery is well underway.

Mr Barr cited the fact retail trade for October rose 20.2 per cent and that all industries saw an increase in employee jobs in the fortnight to 16 October 2021.

The most significant increases were recorded in accommodation and food services (up 12.3 per cent) and arts and recreation services (up 7.9 per cent).

The ACT Government released its Recovery Plan on Saturday (4 December). Mr Barr said recovery for the Territory was expected to be rapid, thanks to a strong health response that had given consumers the confidence to spend.

Steve Timbrell - 4 hours ago
Peter Hatfield I’ve been fined for parking on the nature strip in Belconnen before. It happens View
Mirjam Herzog - 10 hours ago
Fines depend a fair bit on neighbours dobbing the greenstrip parking in...about a decade ago, after buying a second car, we h... View
Les Eite - 10 hours ago
Parking would be free cause it’s one of there own View
News 315

John Bowyer - 5 hours ago
a very simplistic statement. gums make up a lot of our trees. How many other species of trees had a failure in the storm? I n... View
kenbehrens - 7 hours ago
A few commentators have claimed gum trees are not the species of tree nicknamed "widow maker". This article from the ABC migh... View
kenbehrens - 7 hours ago
George Watling, I guess that limb that broke our solar hot water panel and the limb that fell onto our pergola and that limb... View
Property 5

TheSilver - 8 hours ago
Then how do you explain that the UK found that life expectancy went down by 7 weeks for men, and went up by 4 days for women? View
Capital Retro - 9 hours ago
I wonder what the point of that study was. I am confident that Canberrans, having on average the highest levels of intelligen... View
News 33

chewy14 - 8 hours ago
Phydeaux, Was that meant to be a reply to me? My comment directly references the point you made, explaining why recovery prov... View
I am a Rabbit™ - 8 hours ago
The Government went out of their way to exclude payments for Universities which are privately run, but for some reason they c... View
News 26

William Newby - 10 hours ago
This is clearly the work of the devil! View
News 4