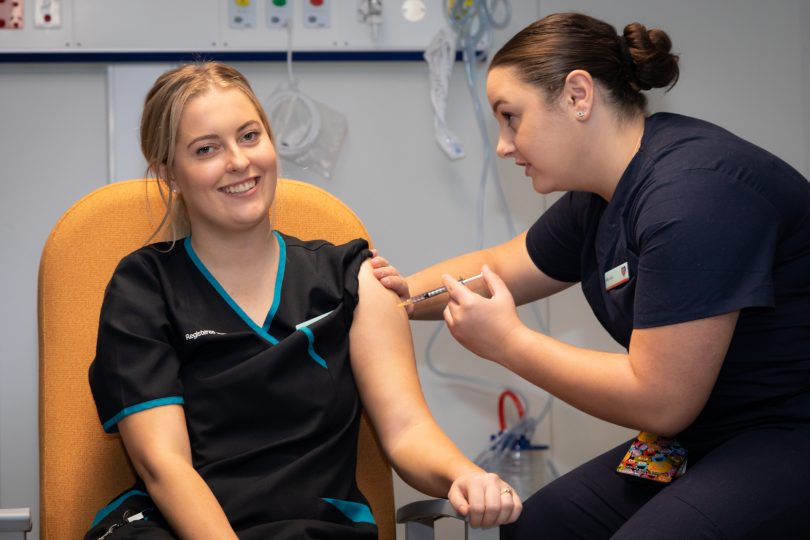 A new COVID-19 vaccination hub will open at the end of the month at Calvary Public Hospital Bruce if there is enough vaccine supply.

Health Minister Rachel Stephen-Smith says the ACT Government was also looking at other sites as part of planning for future phases of the vaccine rollout, including the nurse-led Walk-in Centres.

But she said not all Walk-in Centres would be used as vaccination clinics due to other health demands, especially as the ACT heads into winter, and logistical challenges such as having enough staff available and being able to deliver and store vaccines.

The Calvary clinic would be set up in the Lewisham Building, conveniently located near the car park, allowing for separate entrance and exits to minimise interruption to patients, staff and other clinical operations.

Vaccinations are currently being delivered through the Garran Surge Centre, which can administer 6,000 jabs a week, and GPs.

The Calvary clinic would boost the ACT’s capacity to about 7700 vaccinations a week.

But moving beyond the Surge Centre and GPs depended on vaccine supply, and while the ACT has refrained from criticising the Commonwealth, the states and the Federal Government have been at war over the slow speed of the rollout.

The Federal Government has also blamed the European Union for withholding supplies to Australia of the AstraZeneca vaccine to meet its own demands.

Ms Stephen-Smith said that in mid-March, the Commonwealth provided the ACT Government with a 12-week forecast of vaccine supply for its program.

As at 31 March, the ACT had between 4,264 to 4,552 Pfizer vaccination doses in stock. The total is presented as a range because Pfizer is based on five or six doses per vial, subject to the availability of needles and syringes.

Ms Stephen-Smith has tried to calm anxiety about when people would be vaccinated, calling for patience and saying the strong COVID-free position of the ACT meant a few weeks extra to wait would not make much difference.

But the recent situation in Queensland, where a breakout sourced back to an overseas traveller caused a three-day lockdown, and spilled over the border to northern NSW, forcing the cancellation of the Byron Bluesfest at Easter, has highlighted the severe economic fallout from just a small COVID-19 cluster and given new impetus to the vaccine rollout.

The ACT’s last repat flight touched down at Canberra Airport on 1 March, and the final remaining active case of COVID-19 in hotel quarantine had recovered by 28 March and released from isolation.

There is no longer anyone in quarantine from the 1 March flight.