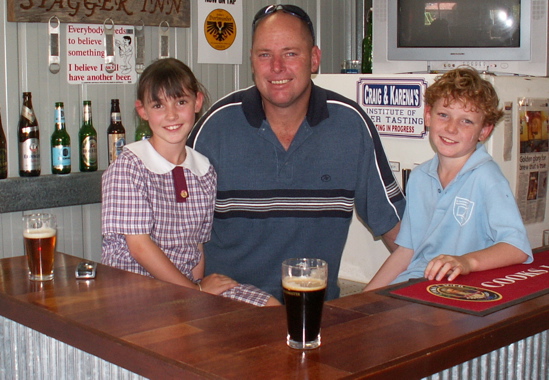 This is Craig Webber with his two assistant brewers, BJ and Sarah, in the wonderful bar he’s built in his shed.

Last week we celebrated his crowning as Champion Brewer at the national homebrewing championship. Craig had the best beer in four categories and with Daniel Rayner, Ross Mitchell and Rod Campbell earned the ACT the title of “Best State of Show”. This afternoon I was lucky enough to see Craig at work in his shed getting a Bavarian Weizen ready to ferment.

[ED – Thanks to Christoph Zierholz for helping arrange the interview]

A fitter and machinist by trade, Craig is an instrument maker at the CSIRO where he got his start in brewing a mere three years ago when Ross Mitchell approached him to build some parts for Ross’s brewing rig. Craig took a shine to the idea of brewing his own VB and, taking advice from Ross, he leapt head first into brewing from basic ingredients straight into kegs and swiftly expanded the horizons of his beer drinking. Here’s Craig with the astonishing rig he’s built for himself combining the mashing, sparging and then the brewing of the wort (pronounced vert). 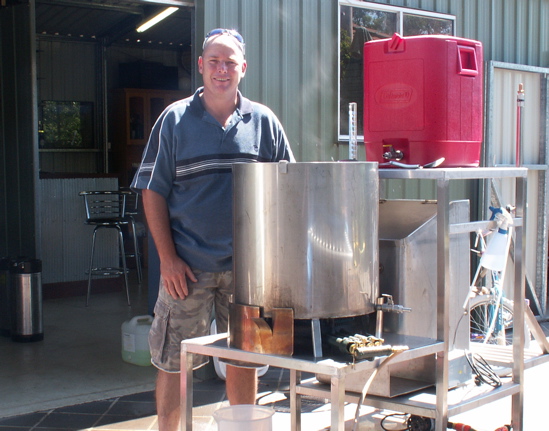 It certainly doesn’t hurt to be able to combine a passion for beer with an ability to work metal with precision. Craig’s gone so far as to make his own grain grinder. 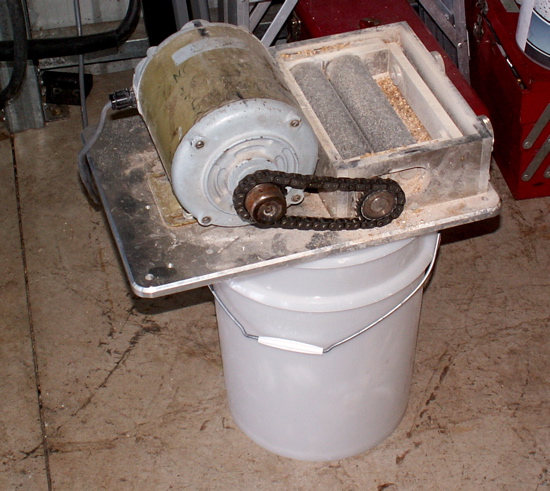 When I arrived the preliminaries had been overcome and the vort was boiling away. This Bavarian Weizen is made of 50% wheat, 50% pilsener malt, and a mere 50 grams of hallertauer malt. 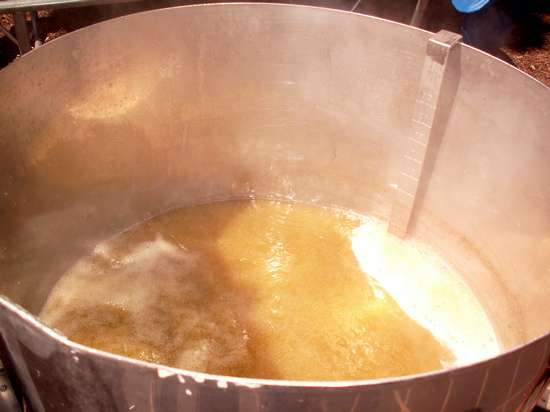 At this early stage (brought out to measure the specific gravity) it’s a very clear liquid with, as you can see, a lot of mysterious chunks floating around. 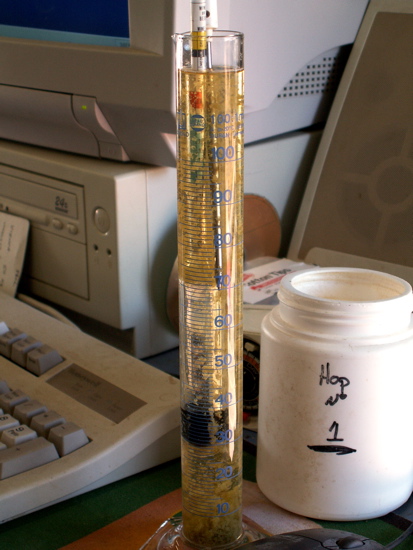 Maintaining a steady temperature through fermentation is always tricky for the home brewer. Craig has overcome this with a dedicated refrigerator with a purpose built thermostat control. When I dropped by it was running at 22 degrees. 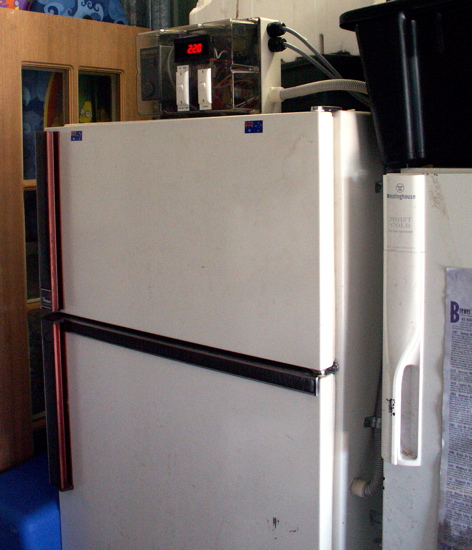 When time was up on the batch in question it was drained through a heat exchanger (tank water for the heat exchange) into the fermentation vessel. Interestingly Craig doesn’t feel the need for air locks on his fermenters, just a loose lid, although the seal on the dedicated refrigerator probably reduces the risks of contamination. This is what the bottom of the barrel looks like after the wort has drained into the fermenter. 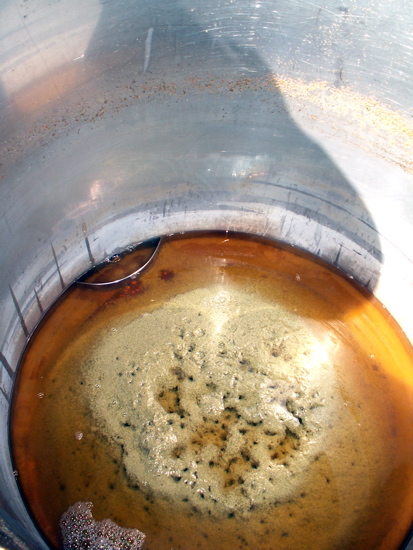 At this point it’s free of the chunks and has taken up the hazier appearance expected of a wheat beer. Here’s Craig checking the specific gravity with help from Chloe in the background. That’s also Craig’s trophy cabinet over his shoulder. 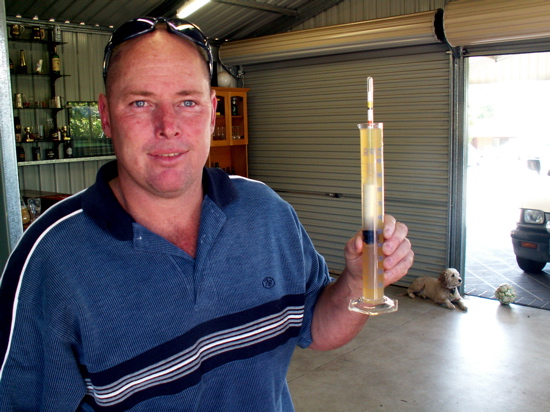 After primary and secondary fermentation the beer finds its way behind the bar in his shed where Craig keep three beers on tap at any given time. 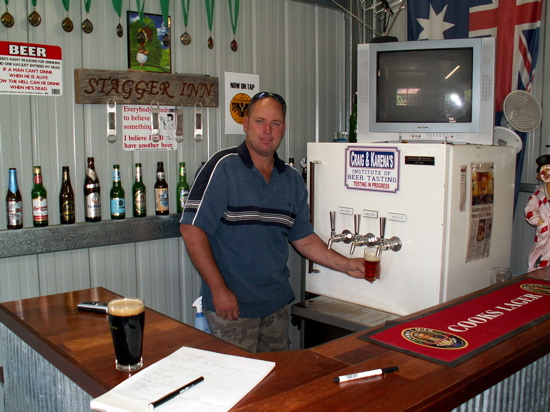 Burners, boilers, spargers, washers, mashers, grinders, a plethora of refrigerators, yeast cultures running through multiple generations, a dedicated computer running the ProMash program to keep track of what’s worked and what hasn’t, the equipment and bar fills a large shed, all put together in just three years.

Brewers tend to be generous and Craig was kind enough to share his three excellent on tap beers (in small glasses as I had to drive) during the time I was there.

For the rest of you wanting to give it a go it’s likely that one of his recipes will be on tap in the Wig and Pen in the near future as the prize for being crowned the Canberra Brewer Of The Year 2006.

For those wanting to follow in his footsteps Craig recommends attending meetings of the Canberra Brewers Club, held on the first Thursday of the month (excluding January) at the Harmonie Club in Narrabundah. Many local brewers will be there seeking opinions about their beers and keen to give advice to the aspiring. (Plug: Canberra Brewers are sponsored by Trojan Hospitality, Brew Your Own At Home, and the Wig and Pen.) If you’re a complete beginner don’t despair, my own kit-based brewery occupies a corner of my laundry and involves nothing more technical an ability to boil water and fill a plastic vat with water, not that my beer is likely to win any awards other than making me personally very happy.

As for why Canberra produces so many excellent brewers that it can beat the rest of the country in competition? The water supply goes some way to explaining it, but there do also seem to be a lot of people with a science background in the local brewing scene helping to bring along the rest of us.

We need to do more articles on the ACT Homebrews and, to compete with the amount of attention “That Place In Hume” gets every time we mention beer.
*is checking out old RA articles*

Now that’s what I call a shed! Congrats to him, not only does he win the title, but he gets to sit back afterwards and drink the best beer in Australia.

Congratulations to Craig – I aspire to one day have that kind of setup (and to brew that quality of beer). Curse my lack of fitting and turning skills!

Sandra Zahavah Whibberley - 5 minutes ago
Vasa Krculj but remembered for breaking our rules of entry to this country and lying. Wow that is great sportsmanship - win a... View
Sandra Zahavah Whibberley - 8 minutes ago
Shirley Willis donating money doesn't make you a fair and nice person. One doesn't negate the other. He does donate, he also... View
Noelene Garner - 19 minutes ago
It's time to stop, forget him, stop the stories, stop the discussions. Please just shove him in a drawer and forget him. He's... View
Opinion 66

Angie Carey - 8 minutes ago
Because not everyone is being Covid-safe. There were approx 50 people at a new trendy bar at a Woden Valley suburban shopping... View
Trev Astle - 10 minutes ago
Live in a cave away from others like in WA bush is the only safe option. LOL View
Mo Bo - 17 minutes ago
Do what did you guys do wrong? Asking is not blaming. View
News 281

Fay Dickie - 26 minutes ago
Alex Kay no it wasn’t!. The neighbours planted it after we moved there!!.... View
Capital Retro - 1 hour ago
I was reviewing photos of my garden taken this time last year (it was some 20 degrees hotter than what it is now) and note th... View
phydeaux - 1 hour ago
Gum trees within the suburbs caught alight, along with the hundreds of houses? Really? Excuse my sarcasm. Any highly flammabl... View
Opinion 147

phydeaux - 2 hours ago
Likewise. An SMSF is an enterprise. You need the interest, time, capability, and some strategic maturity.... View
Ash Miller - 3 hours ago
Looooooool View
Breaking 2

Hans Dimpel - 3 hours ago
Are there any local Canberra/Queanbeyan veggie garden pages or groups? I find most online stuff is international or national.... View
show more show less
*Results are based on activity within last 7 days

UPDATED: A man has died following a multi-vehicle crash on the Kings Highway, near Goulburn Rd, Mulloon. Monaro Police say a...
Opinion 147

Shoppers might be contending with increasingly bare shelves as increasing numbers of workers find themselves in isolation due to COVID-19,...
News 16

Wealth management firm Dixon Advisory has been forced into voluntary administration due to mounting liabilities arising from potential damages from...
News 281

The Education Directorate spent most of last year fighting the release of documents detailing investigations into teachers accused of inappropriate...
News 1

Following the recent storms which tore through large swathes of the Belconnen and Gungahlin region, many residents have voiced their...
Opinion 147

NAPLAN tests results have again provoked controversy in Canberra, and your poll results are an indicator of a deep divide...
Opinion 378

I know it’s a generalisation, but many Canberra residents appear to have an uncomfortable relationship with anything to do with...
Opinion 95

Before Christmas, I tried to be optimistic as the country, led by Prime Minister Scott Morrison and his NSW acolyte...
Opinion 139

At family dinner this past weekend, a relatively heated discussion occurred about whether or not it was appropriate to describe...
Opinion 80

Over the past few years, Canberra's sportsmen and women have been prominent promoting causes and charities considered beneficial to the...
Opinion 66

It's just like a mild cold, they said. If you're vaccinated, you'll barely experience the symptoms. It's really not that...
Motoring 62

@the_riotact @The_RiotACT
#Rapidantigentests will be available for free to #concession card holders from next week, but pharmacists are worried there may not be enough stock https://t.co/1YMxkDsiQL (51 minutes ago)

@the_riotact @The_RiotACT
You're #vaccinated and #boosted, you wear a mask, socially distance, wash your hands and sanitise, but as Zoya Patel discovered, you can do all the right things and still get #COVID https://t.co/LTSsyklfol (4 hours ago)

@the_riotact @The_RiotACT
There's plenty of #livemusic around the capital this week, including #bands, singers, jazz and a swansong (it's your last chance to hear Jack Phemister & The Wine Tasters). Whatever you do, though, check with venues to avoid last-minute changes https://t.co/kK4B1DuBt3 (14 hours ago)