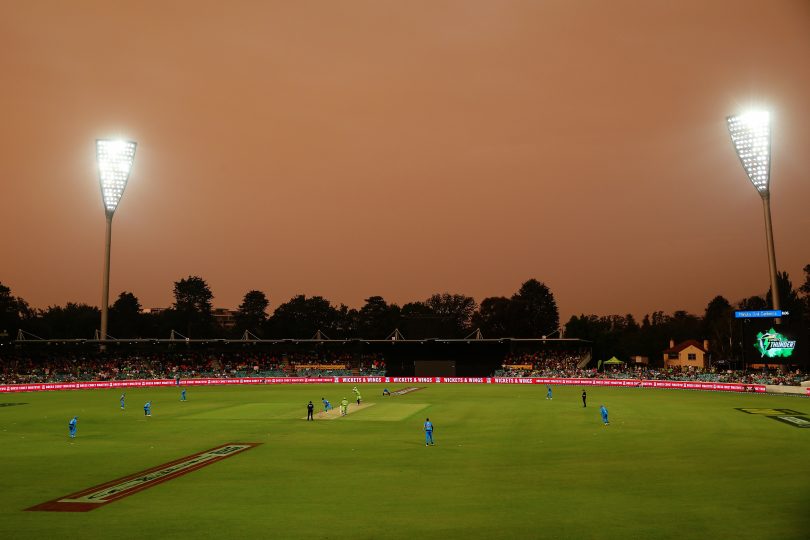 Smoke haze descends on Manuka Oval during the Big Bash League match between the Sydney Thunder and the Adelaide Strikers at Manuka Oval on 21 December. Photo: Brendon Thorne/Getty Images.

The devastation of the bushfires is hard to comprehend but the Australian cricket family is determined to do all it can to support those in need.

Cricket ACT has announced its fundraising for bushfire relief will centre around tonight’s Thunder vs Renegades match at Manuka Oval.

Several external organisations have already joined with Cricket ACT in the fundraising effort, pledging their kind financial support to the cause, including McNamee & Partners, Lords Taverners ACT and the Master Builders Association ACT, who have been fundamental in generously supporting and launching this campaign.

Earlier in the week, Cricket Australia CEO Kevin Roberts confirmed two separate initiatives to give back to impacted communities.

The first is an opportunity for all employees of Cricket Australia, State & Territory Associations and the Australian Cricketers’ Association to spend three working days volunteering to rebuild affected communities throughout 2020. This equates to over 4,000 days of work across Australian Cricket.

The second initiative is a charity cricket match between the Warne XI and the Ponting XI before the BBL final on Saturday, 8 February.

Both teams will see an outstanding list of high-profile former and current cricketers, athletes from other sports, celebrities and entertainers take to the field and play key roles on the day.

The charity match will be broadcast on Seven and Fox, with all profits from both the charity match and BBL final to be donated to Red Cross Bushfire Relief and Recovery.

Cricket’s contribution to bushfire relief got off to a flying start when Shane Warne’s beloved baggy green cap was auctioned last week. The spin king’s baggy green raised more than $1 million when it was bought by the Commonwealth Bank. But Cricket ACT wants to add more, so is encouraging partners and friends to join their fundraising campaign tonight.

“Our hearts go out to all who are suffering as a result of the bushfire crisis and those who are working tirelessly to keep Australians safe. Cricket’s overarching purpose is to unite and inspire our communities through cricket and there really has never been a more critical time to do so. We know so many Australians are eager to give back and this initiative, in collaboration with our cricket partners and friends, is our small way of supporting the Red Cross Bushfire Crisis Relief and Recovery effort,” Cricket CEO, Allsopp said in a statement.