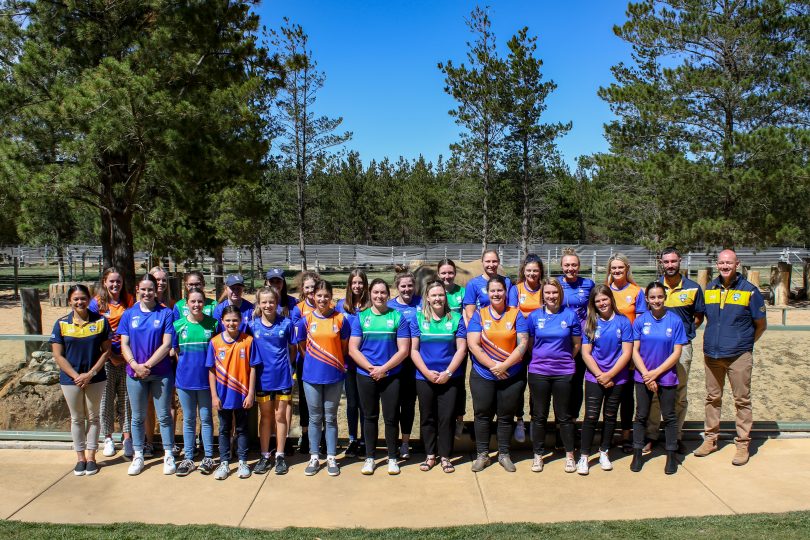 Players and coaches gather for the inaugural launch of the Female T20 Bash competition at the National Zoo and Aquarium. Photos: Supplied.

On a warm Thursday morning, players and coaches gathered at the National Zoo and Aquarium to launch the inaugural Female T20 Bash competition.

Featuring the ACT’s best in the Meteors, and with the region’s best grade cricketers and players selected from broader regions, the four-team tournament aims to bridge the gap between local female grade cricket and the Women’s National Cricket League (WNCL).

For players like Yasmin Welsford, it’s a dream come true.

She’s just 14 but is relishing the chance to play alongside her Eastern Fever captain and Australia A selection Maitlan Brown. She’s hoping to learn everything and “take every opportunity with both hands” – very apt from a wicketkeeper. Playing for Tuggeranong but living on the coast it’s a good thing Yasmin loves her cricket.

“I come up here to play every Saturday. It’s too hard to come up for training so I train with Dad back home. Every Saturday I get up at 5:00 am, drive for two-and-a-half hours, play and then go home,” Yasmin says.

And when asked if the travelling was worth it, Yasmin didn’t need to think twice.

“Absolutely. Playing with Tuggeranong this year has been great. I’ve been playing more games at a higher level.” 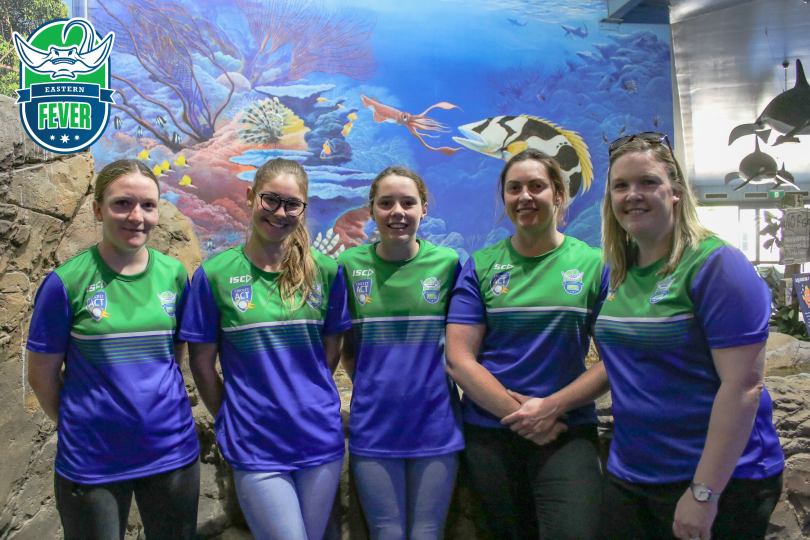 Eastern Fever players at the National Zoo and Aquarium for the launch of the Female T20 Bash Cricket.

ACT Cricket CEO James Allsopp has been a vital cog in getting this competition up and running. He’s very excited about the opportunities it will give young players like Yasmin.

“It’s amazing – some of the rookie players are anywhere between 13 and 18, and they’re getting opportunities to play with girls who have represented not just the Meteors but Australia as well. To be able to pick their brains and learn all about cricket is so beneficial for their development. As a 13-year-old girl getting a chance to play with professional athletes, it’s a young girl’s dream.

“This year we’ve had an increase in junior participation numbers. We’ve also introduced the Thunder Women’s social league. The missing piece was that gap between the Meteors and local cricket, so we’re just trying to find a way to bridge it. Now if you’re a young female coming through the pathway is really clear, from entry-level programs through to Women’s cricket, now the layer with the Female T20 bash and then hopefully playing for the Meteors.” 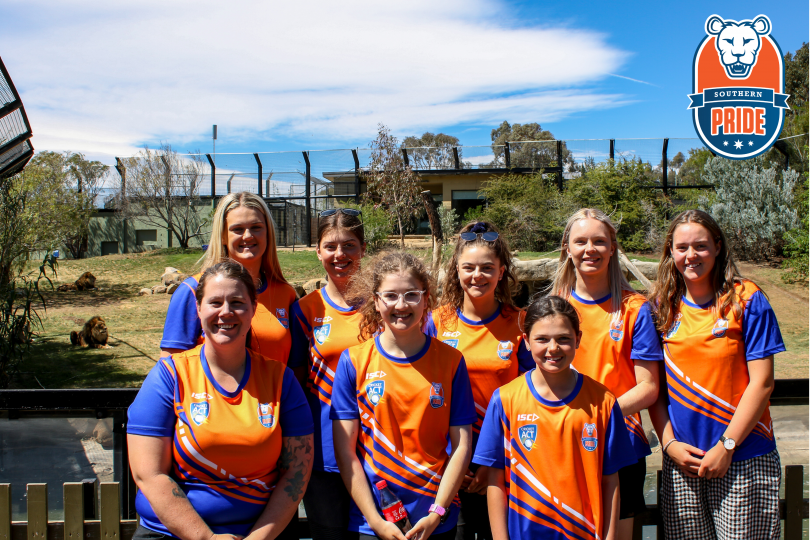 Southern Pride players visit the lions at the Zoo.

At the National Zoo and Aquarium, players got up close and personal with their team mascots, discussed the competition and what it means having this kind of opportunity in Canberra.

“It’s an incredible experience, not just for the rookies but also the club cricketers who get to play with the Meteors and see what we do, see how we play, how we prepare, so it’s a really great experience for them.

“Helping them out is special. Getting to see where I was five to six years ago, to be able to help the same people, it’s great.”

With some of her Meteors teammates coming back from the WBBL season, and others playing in the finals, Cooke is looking forward to the injection of skill and knowledge that those players will bring.

“It’ll be really good. Some of them like Anna Lanning have had a good comeback into the WBBL, some might be over cricket, but they’ve got a great knowledge of T20 cricket that will be a big help.” 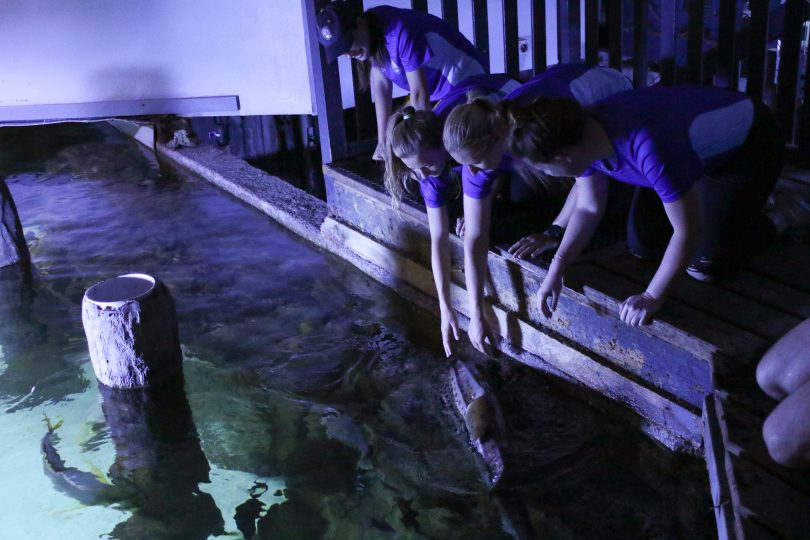 Northern Frenzy players feed the leopard shark at the National Zoo and Aquarium.

The value of this competition is not lost on Western Districts medium pacer Alisa Clark (28). She’ll be donning the purple and blue of the Western Crash, and is grateful for the increasing opportunities for female cricketers in the ACT.

“At my age, I didn’t think I’d be able to play anything higher than grade cricket in Canberra so it means a lot to be selected and be able to come and play against the Meteors,” Alisa says.

“It’s a pretty big deal. It’s something we’ve hoped to achieve for many years, something to really push, and hopefully, in the next five to 10 years, we’ll have two competitions, a first grade and second grade. But for the interim, it’s a really big opportunity for these girls to show everyone what they can do at a higher level of cricket.” 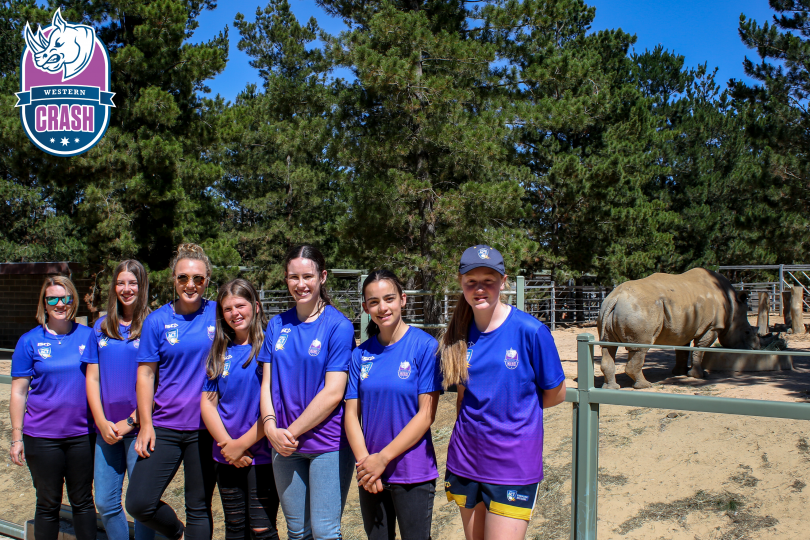 Western Crash players for the launch on Female T20 Bash.

Meteors and Southern Pride off-spinner Isabelle Afaras has had a whirlwind year, recently finishing her HSC while finding time in between study to travel down from Sydney to play and train. Her debut for the Meteors came quite recently but she’s already turning her mind towards assisting those in the Southern Pride who are less experienced.

“It’s a little weird to have that responsibility to coach younger players when I’m also learning from the older players. However, I look forward to the tournament coming up and working with some of the younger players and trying to nurture them as I have been at the Meteors.

“It’s amazing the work that Cricket Australia and Cricket ACT does. Without the coaching staff and the dedication that they bring we wouldn’t have this opportunity. We really do owe it to all the coaching staff, the administration and high-performance staff that have put in all that work for us and created these opportunities.”

The first two rounds of the Female T20 Bash competition are on 14 December from 10:00 am at Kippax Ovals (no tickets required). For more information and all fixtures, visit Cricket ACT.

fridgemagnet - 36 minutes ago
Absolutely. It is a massive oversight. View
jessie - 1 hour ago
The question has to be asked why this path extension and bridge weren’t completed at least two years ago. View
News 10

@The_RiotACT @The_RiotACT
The ACT Government is continuing to back the full rollout of the ChooseCBR vouchers despite claims from the Opposition the scheme failed to hit the mark with businesses https://t.co/W1eCS3K5Cv (39 minutes ago)