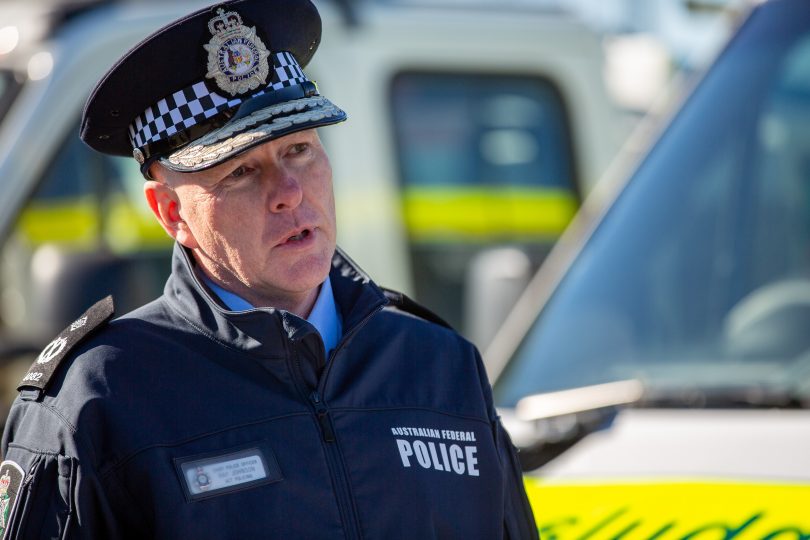 Police tips service Crime Stoppers ACT has launched a new easier to use website which it hopes will further enhance its role in solving all kinds of crimes in the Territory.

The new website has been funded by the Federal Government, as was an independent impact study showing the value of the not-for-profit, crime prevention and community safety organisation.

New national chair Diana Forrester said the 2018 Impact Report showed that for every dollar invested in Crime Stoppers, $11.15 of extra value was generated, adding up to $66 million in added value.

Overall, the service was considered to have a value of $170 million to the Australian community.

“It shows that people can make a significant difference by sharing what they know about suspicious and criminal activity if they hear or see something,” she said.

Ms Forrester said that for the second year in a row, the ACT had more reports per capita than any other jurisdiction in Australia.

She said people trusted the Crime Stoppers brand, were comfortable contacting the service and the new website, which features a redesigned online reporting portal, would only improve outcomes.

ACT Chief Police Officer Ray Johnson said Crime Stoppers had been a fabulous partner with police in the ACT.

“It makes our job much easier,” he said.

He said the new website would enhance ACT Policing’s connection with the public, saying every bit of information was important.

Ms Forrester said the site was a safe and easy way for the public to provide information at any time anonymously without fear of retribution or embarrassment.

“They might remember something from a week ago and might not want to bother the police,” she said. “But every piece of information is vital to solving the puzzle.”

Crime Stoppers ACT can be found at https://www.crimestoppersact.com.au

Alex Troy Elsworth Adkins - 4 minutes ago
No Forrest? Interesting... 🤔 View
Paula Garner - 36 minutes ago
Charlotte Garner here’s the suburbs for cross off your list View
Mark Dowell - 39 minutes ago
"22 Canberra Suburbs That People Earning Good Incomes Can No Longer Afford To Live In"...there, fixed the headline for you. View
News 103

James Hutchison - 22 minutes ago
Allan Pryor yep! Canberra is probably one of the best cities for bike paths and we still have this issue. The bike riders don... View
Allan Pryor - 30 minutes ago
James Hutchison that a lotvof infrastructure for people who wont use it View
Narelle Greentree Rixon - 34 minutes ago
Angel Rixon iam with you follow the road rules, if they want to ride on the road they have to pay like bike rego same as cars... View
Lifestyle 14

Valerie Foster - 31 minutes ago
Been talking about that for years. View
News 7

Inca Serrated - 41 minutes ago
Not a single mention of the conditions that prisoners are living in... Lockdowns, no family contact for over a year, no meani... View
Lori J Tas - 3 hours ago
Kriso Hadskini there are currently rules around how much the govt can enforce people to pay back week to week, sadly, given h... View
Kriso Hadskini - 4 hours ago
Make the inmates pay the bills they cause, it is not rocket science.... View
Community 35

Mark Heinrich - 54 minutes ago
These things are not either or. There’s a need for multiple solutions to multiple problems. Don’t knock something just be... View
Cameron Murtagh - 1 hour ago
Abbey Snell https://domesticviolence.org/domestic-violence-against-men/ View
Cameron Murtagh - 2 hours ago
Something wrong with public housing for men too? View
News 11

@The_RiotACT @The_RiotACT
Around 250 people enjoyed a strip and dip in freezing temperatures this morning for @Lifeline_ACT's fifth Winter Solstice Nude Charity Swim! Were you there? https://t.co/8AcpLjpUyp (37 minutes ago)