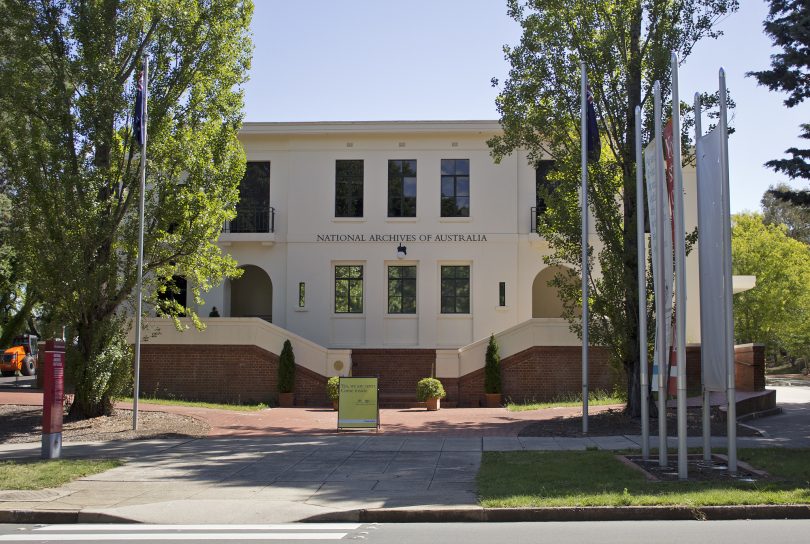 The National Archives is in the midst of a funding crisis. Photo: File.

Critics have lambasted suggestions that the National Archives could crowdfund its way out of a decade-long funding crisis that they say is putting at risk invaluable national assets.

An open letter to the Prime Minister from more than 150 Australian writers, researchers and thinkers, including two Nobel laureates and three Australians of the Year, says that a decade of inaction is coming to fruition as the Archives struggle to rescue decaying audiovisual artefacts.

Former Finance secretary David Tune carried out a functional and efficiency review published on January 30 last year. The review found 361 km of at-risk audio-visual material, including magnetic tape, cellulose acetate subject to vinegar syndrome and film negatives some of which will be beyond recovery by 2025.

At the archives’ current digitisation rate of 0.26km per year, digitising the entire collection would take more than 1000 years and cost $5.2 billion.

The review proposed an urgent $67.7m seven-year initiative to digitise the highest priority records but no funding was forthcoming in the May budget and the Government has not responded to the Tune Report.

The open letter was drafted by Monash University emeritus professor of history Graeme Davidson after an Estimates hearing in which Senator Amanda Stoker described the plight of the NAA artefacts as “part of the ageing process” and “business as usual”.

READ ALSO Budget is good for Canberra but what about the unis, National Archives and social housing?

The letter calls for a prompt commitment to emergency funding recommended by the Tune Review to prevent irretrievable loss of the film and magnetic tape holdings. It describes the NAA as “one of Australia’s premier cultural institutions”, adding that it has always enjoyed government support from both sides of politics.

“We were disappointed, therefore, that in a budget that increased the funding of other national institutions and made very large investments in the expansion of one of them, the Australian War Memorial, no allocation, even of interim funding, was made for the National Archives of Australia,” the letter says.

Senator Stoker also suggested that philanthropy or crowdfunding might both be options for the NAA, but the letter says “The National Archives is not a charity that should have to shake a tin or secure buy-in from the public for support”.

“It is a legislated responsibility of government and should be adequately funded from public revenues.”

Despite the financial crisis, the Archives fought a lengthy battle with historian Professor Jenny Hocking over the release of the so-called Palace Letters between former Governor-General Sir John Kerr and the Queen’s private Secretary Sir Martin Charteris during the 1975 constitutional crisis.

The case is estimated to have cost around $2 million and was lost in the High Court last year.

National Archives’ director David Fricker defended the decision to fight the case through several courts on the basis that the Archives was obliged to honour Sir John Kerr’s wish that the letters only be released with the agreement of the Palace.

“It was, in fact, impossible for me to take any other course of action”, he said.

Journalists Gideon Haigh described the NAA on ABC Radio as “little understood” but vital to the functioning of the nation’s democracy because it provided full historical context for government decision making.

He said the suggestion that crowdfunding or philanthropy might fund the multi-million dollar digitisation costs as “a complete furphy and an ideological drive to defray the government’s expenses” and “absolutely risible”.

“As the institution created by parliament to maintain the official records of the commonwealth, the National Archives is one of the pillars of our democracy,” the open letter says.

“It makes decision-making more transparent. It holds governments, past and present, to account.”

It is a very interesting place. I hope things are worked out!

Bet the ALP wont do anything either 😒

Lori J Tas better vote Greens then. They value public institutions like this

Maybe instead of wasting half a billion taxpayer dollars on an unwanted upgrade to the war memorial, those funds could be better spent as required at NAA IMO!

Don’t we have a brand new huge national archive in Mitchell…? I worked on its construction with Kms of compactus.

Yes that is the repository, or storage area. The files (paper, digital, and so forth) need to be stored somewhere safe and environmentally stable. The East Block building in Parliamentary Triangle houses exhibitions, public reading room, and staff.

That building is simply storage. The cost that the Archives desperately need funding for is to digitise the records. A lot of these records, particularly film, degrade over time so that they will be lost forever if the aren’t copied over to a digital record.

Given the govt is paying $500M to knock down a 20yr old architecturally award winning War Memorial building and rebuild a new one that no one wants, to transform it from a Shrine into a Disneyland of War, why can’t they pull out of that and redirect it where it is desperately needed? Even former Defence Chief, Chris Barrie, says the AWM rebuild is a waste.

A national disgrace. Priorities all wrong.

This is petty-minded vandalism of the national heritage.

If the recent federal Budget had proclaimed that fiscal repair was the absolute No.1 priority and that the toughest of tough decisions were on the table to achieve that end, then this might make sense – but the Budget messaging was quite different, if anything almost the complete opposite, with only the occasional whiff of austerity.

The National Archives, like its Film and Sound counterpart, would be rich in material which could, with intelligent investment and with due respect for privacy etc. issues, be a source of worthwhile ongoing revenue – an opportunity which a government that likes to talk about the private sector should recognise and pursue.

Can a government department go bankrupt?