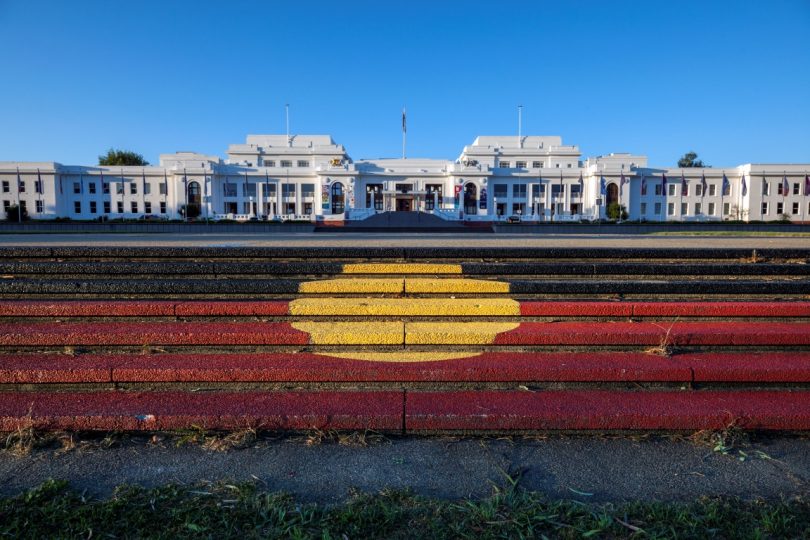 The ACT’s Galambany Circle Sentencing Court has helped tip the scales of justice back towards Indigenous people, a new cost-benefit analysis has found. Photo: Museum of Australian Democracy.

The ACT’s Galambany Circle Sentencing Court has freed up more than $5.3 million from the justice system by moving Indigenous people away from incarceration and into “culturally appropriate sentencing options”.

Diverting Indigenous people away from prison and increasing their community participation has had a positive impact on reducing recidivism rates, increasing education rates and improving the lives of offenders’ families, a cost-benefit analysis commissioned by the ACT Government found.

The program’s $3.3 million costs will provide more than $10.7 million in social returns and savings from incarceration costs in the 10 years to 2026, the analysis found.

One Indigenous woman who appeared before Galambany Circle Sentencing Court said the circle helped tip the scales of justice for First Nations people with its focus on restorative justice.

“White people are more educated and they are more likely to stand up for themselves,” she said. “[It is] harder for Kooris.

“You are given a chance by Elders and the Judge rather than being pre-judged. Mainstream is very adversarial – they get to kick you but you can’t kick back.”

Aboriginal and Torres Strait Islander Elders and other respected persons sit alongside the Magistrate in the circle sentencing court and instil a cultural perspective into sentencing.

A referral to Galambany is only possible if the offence is not a sexual one, the person enters a guilty plea, and they are then assessed to be appropriate for the circle.

They must then complete the entire program.

Treatment services and close supervision throughout the program aim to address underlying issues that brought the person in contact with the justice system in order to help reduce recidivism.

It also helps reduce incarceration rates. Research cited in the analysis found that Indigenous people are 23-50 per cent more likely to be sentenced to prison in NSW, South Australia and Western Australia.

Despite comprising less than two per cent of the adult population in the ACT, Aboriginal and Torres Strait Islander people account for almost a quarter of the prisoners at the Alexander Maconochie Centre (AMC).

The 279 per cent increase in Indigenous incarceration in the ACT during the past decade is also five times higher than the national increase of 59 per cent.

A Ministerial Briefing provided to the incoming ACT Minister for Corrections and Justice Health after the 2020 ACT election revealed low diversion rates for Indigenous people going through the criminal justice system.

“The ACT has had the highest increase of Aboriginal and Torres Strait Islander detainees since 2009-2010 of any jurisdiction in Australia,” said the briefing.

Reducing the overrepresentation of Indigenous people in ACT prisons also provides benefits beyond the community, he said.

“When you look at that against how much this court costs to run, it’s clear Galambany Circle Sentencing Court is a positive investment for the ACT.”

Why quote a report that is dated? Judge (Magistrate Boss) Boss left the Galambany circle some time ago. From my involvement with the Galambany Circle I believe the process is dated and needs to be reviewed and re-structured.

Different rules for different people. Is that fair?

No it is not, some would say it is and it happens all the time in our politics.

Treating people differently because of their culture and the colour of their skin is called racism.

These kinds of things do nothing but create more racism, because people see it as what it is, special treatment based on skin colour.

If you commit crimes, you should be tried and sentenced the same way any other person is, regardless of culture or skin colour.

Not really. I see what you’re saying but I think you’re forgetting the part where Aboriginal people see very disproportionate circumstances in their lives which is quite unfortunate given this countries history. They need to be lifted so that they can get a job, climb the ladder and set a good reputation for their people, and make it so we are equal and given equal opportunity in this country.

The old way of just locking them up and throwing away the key is why crime keeps happening. Fathers aren’t in the home so the kids can’t be raised properly. When you consider that 50% of prison population is aboriginals, this is very embarrassing for us as a country on the world stage and I am supised there isn’t more controversy about this fact.

I don’t see how this can be twisted to make it seem that it’s actually whites are victims of racism from this. When it is very obvious the opposite is happening.

I completely disagree. Aboriginal people in Australia are given so many opportunities and eye watering amounts of funding. You can’t help people who won’t help themselves.

Giving them special treatment when they commit crimes just creates further division. Making excuses for poor behaviour doesn’t help it, and certainly doesn’t encourage it to improve. I know plenty of Aboriginal people who have been able to hold down jobs all their adult lives and refrain from committing crimes, and generally be normal and positive people in the general community. There is absolutely no excuse for others to not do the same. People of other races are poor, disadvantaged etc, and also largely seem to be able to be functioning members of society.

All this does is tell everybody that if you are Aboriginal, you can commit crimes and get soft touch sentencing. This has nothing at all to do with white people being the victim, because everybody but Aboriginal people deal with the same justice system. It’s racist, plain and simple, and only achieves furthering the idea that Aboriginal people get everything handed them.

Right – now do the disproportionate ratio of offences committed v time served. Aboriginal people ARE treated differently in the justice system. They are incarcerated at a significantly high ratio then non indigenous folk for identical crimes. It’s not an opinion – there is data, studies all sorts of stuff to back this up as a fact.

The data is somewhat flawed.