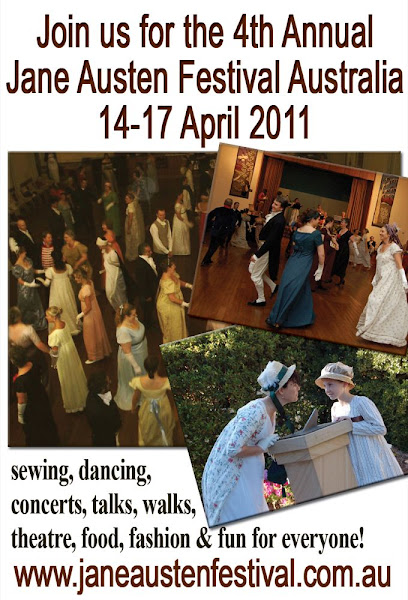 The Jane Austen Festival Australia is entering its 4th year. Although it still takes place over three days in the middle of April, and is still centered around the beautiful historic St John’s Church in Reid, the program has grown from a single stream to three simultaneous streams, making use of every hall and room in the church complex. This year’s festival will include concerts in the church, Napoleonic era re-enactors on the lawns and 22 presenters in the program.

The festival is a celebration and exploration, not just of Jane Austen’s novels, but of the culture of her time. As well as dedicated sessions on Austen’s work, there are sessions on music, dance, costume, food, theatre and men’s military history. Top presenters from around the country will offer a variety of talks, as well as hands-on sewing workshops, feet-on-floor dance workshop, and panels inviting audience participation. Though casual dress is fine, there’s lots of opportunity to costume-up for outdoor promenades, evening dinners and balls.

In an age when popular culture would have us believe that anything before DVDs is ancient history, that it’s only other people who have a cultural heritage, and that its more important to be outrageous, groundbreaking and cool than considerate, accomplished or gentle, many are discovering the satisfaction that can be had by better understanding the past and bringing forward from it elements that appeal.

In this regard, the age of Jane Austen has proved particularly attractive to most modern day young men and women. Whereas the fashions of the 18th and late 19th century might seem weird or cruel, those high-waisted gowns and squire-like tails from Jane Austen’s age (the first decades of the 19th century) seem romantic and elegant. Where the social order of the 18th century seems alien, and that of the late 19th century torn and sooted by the industrial revolution, that of Austen’s years seems more egalitarian. Where the dancing of the 18th century is imagined to be courtly and stiff, and that of the late 19th century to be black-tie and formal, that of the Austen’s day seems to be just plain fun. The age’s accessibility is further enhanced, of course, by the timeless themes, engaging characters, involving plots and good humour of Jane Austen’s novels, and by the many recent screen adaptations of those novels.

One of the main interests of Jane Austen’s day, and indeed of Jane Austen herself, was dancing, and dance workshops and balls will fill the main hall, all day, every day of the festival. Dance teacher and historian Dr John Gardiner-Garden makes joining in and learning easy and fun, and participants soon realise why it is observed in Pride and Prejudice, that ‘To be fond of dancing was a certain step towards falling in love’, why it is noted in Persuasion that ‘thirteen winters’ revolving frosts had seen [Elizabeth] opening every ball of credit which a scanty neighborhood afforded’, and why in Northanger Abbey —our feature novel for the 2011 Festival— Catherine Morland’s clever dance partner Mr Tilney says: ‘I consider a country-dance as an emblem of marriage. Fidelity and complaisance are the principle duties of both; and those men who do not chuse to dance or marry themselves, have no business with the partners or wives of their neighbours’.

Festival participants’ first taste of Regency era dance invariably leaves them wanting more, just as it is remarked in Emma that: ‘It may be possible to do without dancing entirely. Instances have been known of young people passing many, many months successively without being at any ball of any description, and no material injury accrue either to body or mind; – but when a beginning is made – when the felicities of rapid motion have once been, though slightly, felt – it must be a very heavy set that does not ask for more.’

The 2011 Jane Austen Festival runs from 14-17 April. Full program and presenter details are available at http://www.janeaustenfestival.com.au, where tickets can also be booked.

For those that want more either side of the festival, consider the Historic Costume & Design Week, 11-14 April, 9am-3pm each day in Yarralumla, during which you can make a regency era bonnet (see www.janeaustenfestival.com.au for more information) or consider the 19th Century Dance Week, 18-21 April, 9-5pm each day (see www.earthlydelights.com.au/victorian2.htm for more information)

Russell Nankervis - 10 minutes ago
The Canberra Liberals will never change. Climate change affects us all and the UN set important benchmarks to meet. Pretty su... View
Mark Chapman - 1 hour ago
If you want advice on how to become blinkered and parochial, then the Libs are the ones to ask. View
astro2 - 1 hour ago
There's nothing wrong with raising concerns or expressing criticism about public health, schools, roads etc (as most people d... View
Opinion 25

Brian Ashcroft - 13 minutes ago
urban maintenance since the start of self government has always been an underfunded disaster-Canberra was once a showpiece-qu... View
Ashley Wright - 1 hour ago
Julie Macklin that might be the centre of the shopping area but the city is far bigger than that and the interchange needs to... View
Julie Macklin - 1 hour ago
Ashley Wright Roughly this area. View
News 69

Capital Retro - 1 hour ago
Is the Nissan Cedric still available? It would be compatible with Canberra. View
James Andric - 4 hours ago
Kristian Dosen hahahahahha 🐐 View
News 16

chewy14 - 1 hour ago
Capital Retro, You haven't put on the table expert findings, You've clearly cherry picked one heading that you found that you... View
Futureproof - 2 hours ago
Doing everything to assist rich toffs, yeah I get it now View
chewy14 - 4 hours ago
Haha, You've really shot yourself in the foot with this googling even though multiple studies now show this isn't an issue. T... View
Courts & Crime 2

Around 31,000 Canberra households will receive an increase in the annual utilities concession from the ACT Government to offset electricity...
News 25

@The_RiotACT @The_RiotACT
Fifty years on from The Battle of Long Khanh - not to be confused with that of Long Tan - The @RoyalAustMint has released a commemorative coin in honour of those who fought in it https://t.co/ZhrD1us4S5 (27 minutes ago)