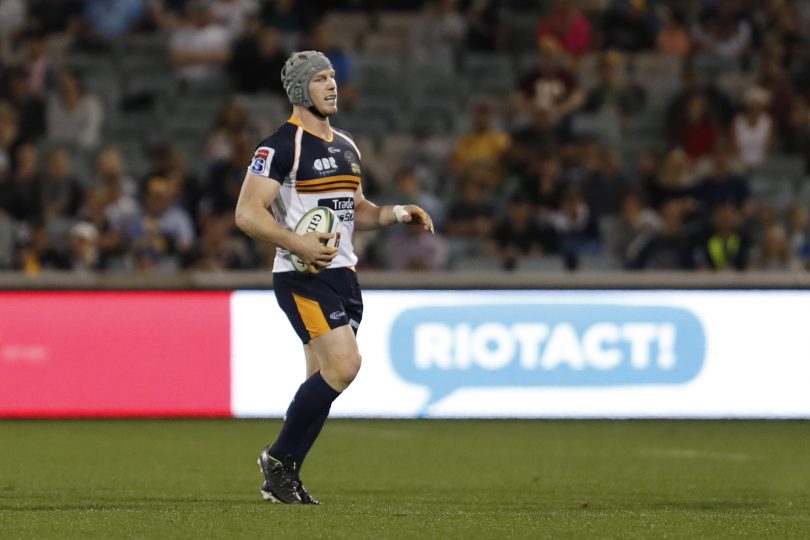 David Pocock has been ruled out of the Brumbies’ game against the Rebels with a calf injury. Photo Supplied by Photox.

David Pocock has been ruled out of the Brumbies “most important game” of the year against the Melbourne Rebels in a pivotal Australian derby clash at GIO Stadium.

Pocock is still recovering from a calf injury so Dan McKellar decided not to risk his star flanker before the Brumbies prepare to head on a two-week tour to South Africa next week.

The 30-year-old has arguably been the Brumbies best player this year despite playing just four games this season after a knee injury delayed his start to the year before suffering from a calf injury for the past three weeks.

McKellar said Pocock was not 100 per cent so he wasn’t going to risk him before the tour against the Lions and the Bulls.

“If you throw him out there to play this weekend, you risk him not being in Africa so we’ve got to get him to 100 per cent and he’s not quite there,” McKellar told media on Thursday afternoon.

“If Poey was in a position where I thought he could play, I would play him but he’s not.”

The flanker’s absence is a huge blow to the Brumbies ahead of a clash the coach is defining as “most important game” of the year.

“Most important game, without a doubt. They are all important, I’ve said that but we need to win this game,” McKellar said.

“It is about winning this game and getting some momentum with the tour. It’s a simple message this weekend: we have got to win.

“Everyone talks about these conference games being a 10-point game and that is what it is and we are going to win it.”

McKellar believes his players are up for their do or die clash and they fully know what is at stake.

“I think the energy has been excellent this week at training and the boys have prepared really well,” he said.

“We are back at home before we head away for two weeks and I am looking forward to Saturday night and I know the players are.”

Christian Lealiifano, Rob Valetini and Lachlan McCaffrey all back in the starting XV and will boost the home side as they try to keep their 2018 season alive.

Brumbies vs Rebels at GIO Stadium, Saturday 7:45 pm. Buy your tickets from Ticketek.

chewy14 - 23 minutes ago
"A responsible and competent government would" Well there's your first problem. They haven't been forthcoming with robust bus... View
michael quirk - 2 hours ago
The government has yet to provide evidence to justify the light rail extension, the viability of which is tenuous given incre... View
News 115

Jay Annabel - 35 minutes ago
Ajay Cee ...... a drastically reduced number in 2020 because of covid lockdowns. View
Ajay Cee - 2 hours ago
Jay Annabel 36 in 2020. View
chewy14 - 3 hours ago
JC, Seeing as I've been the one quoting directly from the national plan, your memory seems a bit fuzzy. And I'm still waiting... View
News 1

Capital Retro - 43 minutes ago
The next step is to equip the ravens with lasers. Death to all drones!... View
Community 6

@The_RiotACT @The_RiotACT
A plastic surgery clinic and medical centres are among new exposure sites, and Calvary has confirmed a fully vaccinated aged-care staff member has tested positive https://t.co/RE8RHLqgTF (19 minutes ago)

@The_RiotACT @The_RiotACT
A new @ACOSS survey has revealed 85 per cent of income support recipients cannot access COVID-19 #Disaster Payments and are struggling to survive, including up to 20,000 #Canberrans https://t.co/0w2XlrG1qc (59 minutes ago)