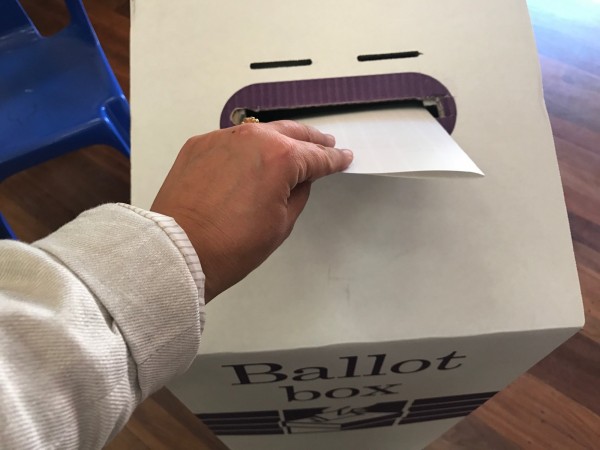 The voters of Deakin and Yarralumla will be going to the polls next year to elect MLAs for Murrumbidgee, with the finalisation today of the ACT Legislative Assembly electoral boundaries for 2020.

The redistribution appears to have favoured the Canberra Liberals and the Labor Party had objected to the wealthy inner south suburbs being added to Woden and Weston Creek-based Murrumbidgee, arguing – along with the Deakin Residents Association, Yarralumla Residents Association and the Inner South Canberra Community Council – that they had a strong, shared community of interest with the other Inner South suburbs of Forrest, Barton, Griffith, Kingston Narrabundah and Red Hill in Kurrajong.

But the Augmented Commission did not believe any of the objections had raised substantial new matters that had not been canvassed in the initial rounds of public suggestions and comments.

It said it could not consider demographic changes beyond 2020, such as those raised by the ISCCC and the Yarralumla Residents Association which argued that future developments and growth in current Murrumbidgee suburbs will likely result in the need for Yarralumla and/or Deakin to be reallocated back to Kurrajong as part of subsequent redistributions.

The Augmented Commission also said ISCCC’s assertion that the number of MLAs engaged on issues affecting the inner south would double was not unique to these suburbs alone, saying this was the case where any district was divided across two or more electorates with a common community of interests.

Labor had submitted that Red Hill go to Murrumbidgee but the Augmented Commission backed the view that Yarralumla and Deakin have a stronger connection with the Woden Valley through transport links via
Adelaide Avenue and Yarra Glen, as well as Carruthers Street and Kent Street; and economic and social links via the Woden Town Centre, their main shopping hub for those residents.

The Augmented Commission also accepted the unprecedented decision to split the large southern suburb of Kambah east and west down Drakeford Drive, with Kambah East going to Murrumbidgee, and the rest of Kambah going to Tuggeranong-based Brindabella. 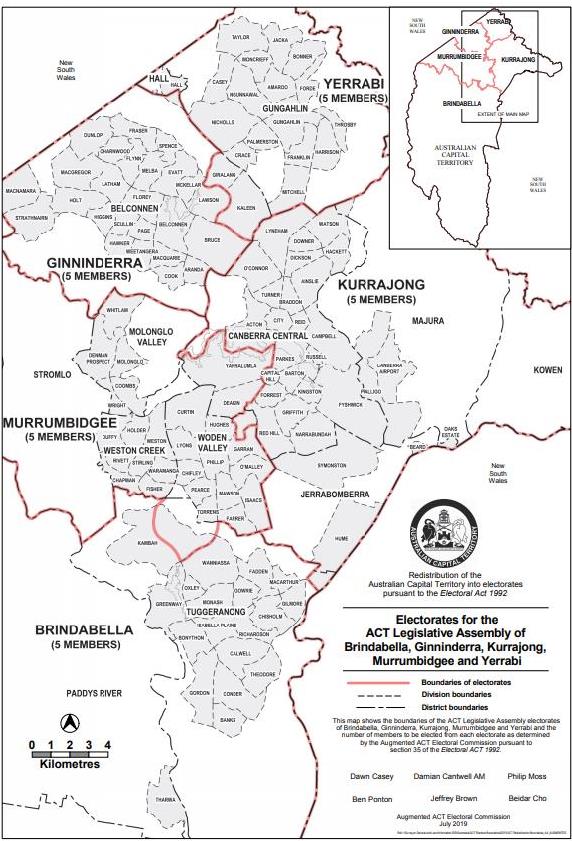 The final electorates are:

Ginninderra, a five Member electorate comprising the district of Belconnen (excluding the suburbs of Giralang and Kaleen);

Kurrajong, a five Member electorate comprising the district of Canberra Central (excluding the suburbs of Deakin and Yarralumla), and the districts of Jerrabomberra (including the entire suburb of Hume), Kowen and Majura;

Murrumbidgee, a five Member electorate comprising the districts of Molonglo Valley, Weston Creek, Woden Valley, Coree (including the village of Uriarra) and Stromlo, the section of the Tuggeranong suburb of Kambah that is East of Drakeford Drive, and that portion of Tuggeranong District between Drakeford Drive and Athllon Drive, and the Canberra Central suburbs of Deakin and Yarralumla; and

Yerrabi, a five Member electorate comprising the districts of Gungahlin and Hall and the Belconnen District suburbs of Giralang and Kaleen.

The Augmented Commission received seven objections to the proposed redistribution.

There will be no further opportunities for public objections.

The other half of Kambah will end up back in Brindabella at some stage, so one or both may stay in Murrumbidgee longer than 4 years.

Kambah split in half! Well I guess those residents can continue to get ignored by two different sets of MLA’s.

ACT Labor has publicly admitted to a successful election winning strategy of focusing funding and promises to the North of the city, so I guess it really doesn’t matter where the Tuggeranong boundaries are drawn.