Police and paramedics on the scene outside Kokomo’s on Sunday morning. Photo: Supplied.

The death of the Canberra commander of the Comancheros Motorcycle Club, Pitisoni Ulavalu, outside Kokomo’s in Civic on Sunday morning will have national ramifications for outlaw motorcycle gangs, according to the detective leading the investigation into his death.

Detective Superintendent Scott Moller today confirmed the death of 48-year-old Pitasoni Ulavalu of Kaleen, who was stabbed following a violent brawl inside the popular venue at about midnight on 19 July.

Police have had to wait for a report from the ACT Coroner before confirming the death of Mr Ulavalu.

Paramedics unsuccessfully tried to revive Mr Uluvalu, who died from his wounds on the pavement outside Kokomo’s in front of a large crowd of witnesses in the early hours of Sunday morning.

Det Supt Moller today said the community had been very helpful and thanked those who had provided a large amount of evidence that will become crucial as the investigation develops.

“Police have spoken to a number of witnesses and have reviewed a large amount of CCTV and mobile phone footage of the incident,” Det Supt Moller said.

“It is quite a shocking incident in Canberra but I want to let the community know that these are very rare incidents and ACT Policing takes this extremely seriously and we will do everything we can to bring the perpetrators of this crime to justice.”

He said there was a “detailed amount of information” that had to be processed before charges could be laid. He also declined to comment about whether a person of interest had been questioned.

Region Media has decided not to publish video footage from inside Kokomo’s which shows a number of men involved in a violent brawl where tables are knocked over and glass is heard breaking in front of shrieking witnesses. The footage also shows a man lying on the pavement outside the venue and large trails of blood inside.

Witnesses outside the venue have recalled a fight moving up and down Bunda Street outside Kokomo’s. A number of scuffles occurred as more than 30 police officers and paramedics converged on the scene.

As police were managing the scene, a 30-year-old man was arrested after arguing with police. A short time later, the man allegedly engaged in a physical confrontation with another man. The 30-year-old, who is also a member of the Comancheros, faced the ACT Magistrates Court on 20 July and was refused bail. Police said he was not a suspect in relation to the death of Mr Ulavalu.

SEE VIDEO FROM OUTSIDE KOKOMO’S HERE

Det Supt Moller said they have spoken to a second man, who is known to police, and has been released from hospital after being injured during the brawl.

Four teams, including officers from the Outlaw Motorcycle Gang Task Force Nemesis and ACT Policing’s homicide and intelligence units, will continue their investigations; however, Det Supt Moller declined to comment further and said police will only provide further information if there is a significant development in the case or if a person is taken into custody. 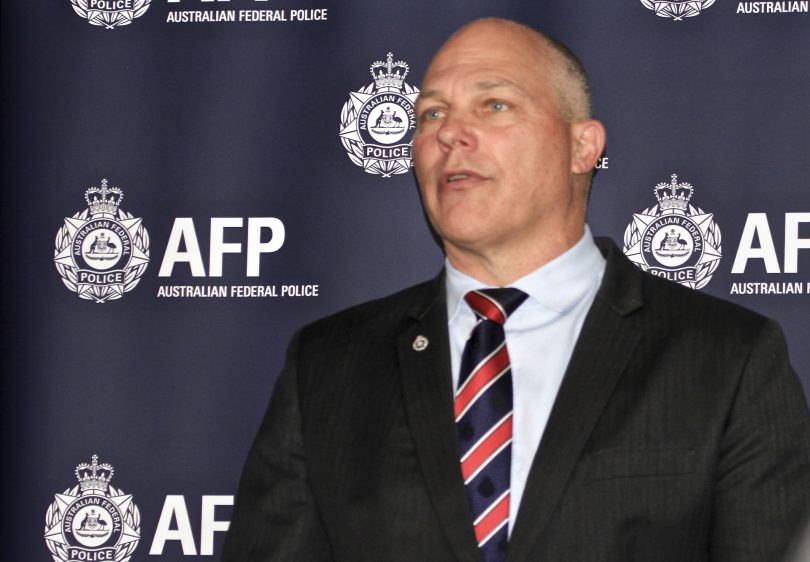 “For anyone out there contemplating joining an outlaw motorcycle gang, use this incident as an example of what can happen to you,” said Detective Superintendent Scott Moller. Photo: Michael Weaver.

However, he did say that police have dedicated their resources towards ensuring there is no reprisal following the death of Mr Ulavalu.

Asked if there was a risk of a revenge attack, Det Supt Moller replied: “At this stage, no.”

“This is an investigation that will have ramifications nationally because this is the commander of the ACT chapter of the Comancheros outlaw motorcycle gang. They are internationally placed so the ramifications of this will be felt across the nation.

“I think what we’ll see is that people from within Mr Ulavalu’s interactions will want to assist in what we are doing.

He also said police would continue to work with the ACT Government to reform laws that assist in the prosecution of outlaw motorcycle gang members.

Following the incident, Shadow Attorney-General Jeremy Hanson said he will push for the passage of anti-consorting laws in the ACT Legislative Assembly tomorrow (23 July).