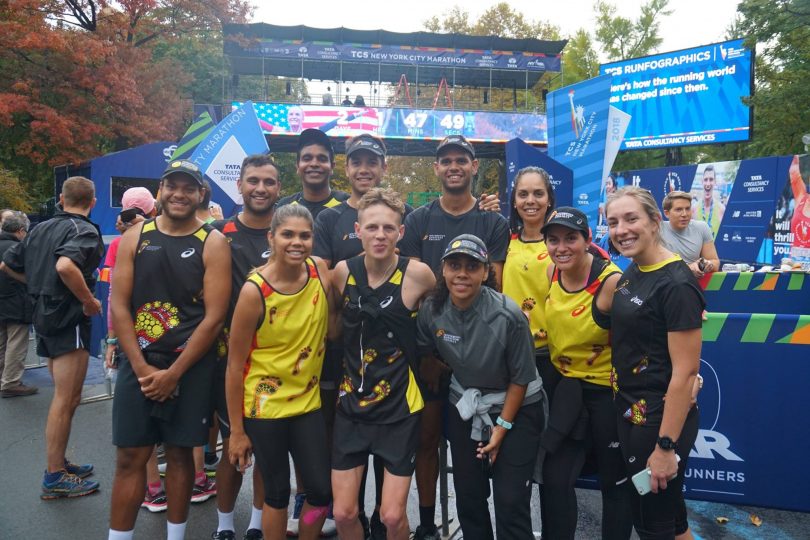 Rob de Castella ran all over the world representing Australia. But Canberra’s greatest marathon runner says the work he’s doing right now with the Indigenous Marathon Foundation is the most important he’s ever done.

Not that it’s easy in the age of COVID-19: at this time of the year, Deek would usually be on the Gold Coast, training his 16-strong squad to compete in the New York marathon on the first Sunday in November.

“It’s been an opportunity for us to take our program virtual”, de Castella told Region Media. “We’ve got the squad doing their Certificate IV in business online, meeting up on Zoom and developing relationships and running in their own communities.”

This week's news update is with Rob de Castella, marathon legend and former AIS director. He's worried the elite sports centre is being mothballed and says the Federal government must step up. We're also talking about the Coombs shops, light rail, the Women's World Cup and new residents at the Dinosaur Museum.

Each of the 16 participants is continuing to run and train, and Deek says that in many ways that’s been a good thing. Communities can see how much work goes into getting marathon-fit within six months. They’re out there supporting the runners, cheering them on and building community spirit.

The plan is for the runners to complete a marathon somewhere, somehow, on the November 1 date, although the New York event has been cancelled. 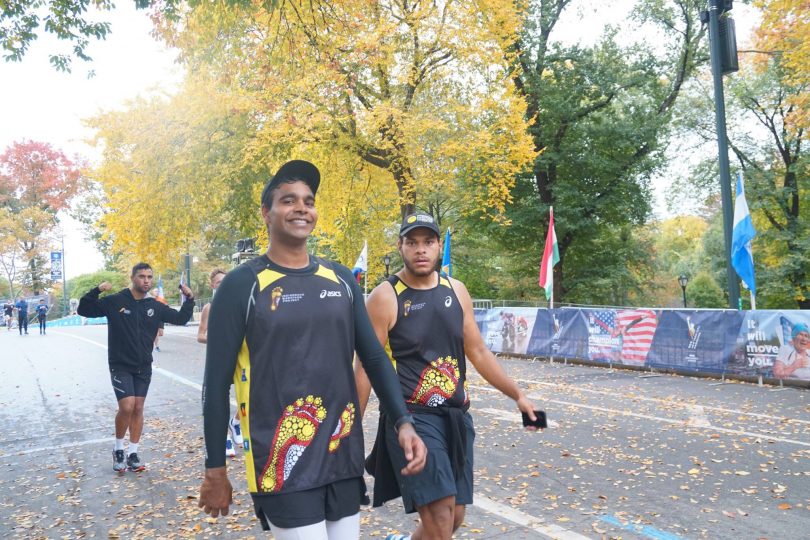 While runners can’t go to New York in November, there will still be a marathon. Photo: Facebook.

Meanwhile, the Run Sweat Inspire virtual running festival is taking place from 5 to 12 July in partnership with NAIDOC week, which has itself been formally postponed until November. More than 1500 people have already registered around the country.

Participants can march or run 2 km, 5 km, a half marathon or a full marathon. There’s a medal designed by one of last year’s IMF marathon graduates, a well-regarded Adelaide street artist and everyone who signs up will receive one.

The festival is designed for people who want to set a goal for walking and running, support their local Aboriginal and Torres Strait Islander community, run alongside the Indigenous Marathon Project Squad virtually as they tackle their first ever half marathon or simply get off the couch.

You can also help fundraising for the greater Indigenous Marathon Foundation project by making a donation rather than paying the $40 registration fee.

“We think this is a great way to showcase Indigenous resilience and achievement and share culture,” Deek says.

“The plight of First Nations people in this country is a national disgrace and we need to find ways to showcase the beauty and richness of Indigenous people and culture.

“A marathon in six months is a pretty big order, but anyone who knows anything about the struggle Indigenous people have had over the last few hundred years knows how determined and resilient they are.

Deek says the marathon experience has been life-changing and deeply empowering for participants, of whom there are now almost 100.

The Central Park finish line for the world’s biggest run is only the starting point for program participants. The IMF raises funds for scholarships and grants, mentoring and supporting the graduates to drive change in their communities.

Several graduates are now studying medicine and others have begun their own small businesses and are working on projects including youth suicide prevention. Nat Heath, a 2012 graduate and IMF board member, is planning to run 100 km on 12 July in Newcastle to mark 10 years and more than 100 IMF graduates.

“This is an opportunity to tell a strong positive and powerful story,” he says.

“It’s important to close the gap, but we can’t get completely fixated on negative messages. We need positive stories. The media can be distracted and excited by drama and negatives, so we must find ways to showcase the positive and make everyone realise the negative is not the norm.

“Success excellence and achievement must be the norm

“I’ve done a lot of things as an elite athlete and travelled around the world. What I’m doing now is the most important thing I’ve ever done”.

Mick Andrews - 1 minute ago
Honestly I love doing 85 on the parkway, il stick too it😆 View
Brindie - 2 hours ago
Given that our main roads are so congested (Tuggeranong Parkway; Adelaide Avenue) and that our public transport system is so... View
Ol L - 3 hours ago
Canberra. If the traffic gets bad just put in more traffic lights, that’ll work real good…..check out Hindmarsh Drive Phi... View
Opinion 193

Adam Scott - 1 minute ago
I regularly feel like the only one doing 40 in the 40 zones. Also do some drivers think that they use more petrol with their... View
Ali Light Alasady - 49 minutes ago
Tani Buist LEGIT HOW LONG HAVE WE BEEN COMPLAINING ABOUT THE IDIOTS ON THE ROADS View
Jon Rooks - 56 minutes ago
Kathleen Julia Gill. I see both. The problem with these online debates is people keep making blanket, patently nonfactual sta... View
Breaking 15

@The_RiotACT @The_RiotACT
ChooseCBR data reveals that some businesses processed more than 500 vouchers in the 25 hours the scheme ran, and almost 40 per cent of the vouchers were claimed at stores like grocers https://t.co/vVrNddImTH (21 minutes ago)