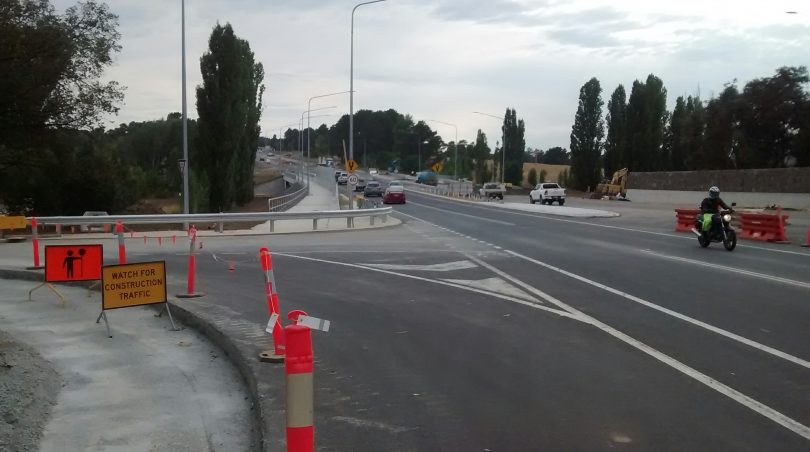 Drivers will have to wait until early April to take to a double-laned Cotter Road after minor delays put back the duplication project’s completion by two months.

The eagerly awaited $28.9 million project was expected to be completed in early February but issues such as the relocation of water and utility services, and unexpected site conditions have caused the extra wait.

A Transport Canberra spokesperson said there had also been a problem with the demolition of the footway on the bridge over the Tuggeranong Parkway, which required an alternative construction approach.

In coming weeks, drivers will face a traffic switch once reconstruction of the westbound lanes is complete.

Traffic heading towards Molonglo and Weston will be moved onto this refurbished section of road, which includes the reconstructed bridge over Yarralumla Creek. This will allow resurfacing works to be completed on the eastbound traffic lanes.

A number of works have already been completed, or are nearing completion, including:

The spokesperson said a portion of the shared path, between Yarralumla Creek and the eastern approach to the intersection with the Tuggeranong Parkway, was open to pedestrians and cyclists, with the remainder due to be completed in March.

The Cotter Road carries more than 20,000 vehicles a day as a major thoroughfare for traffic travelling from Canberra’s inner south suburbs, Weston Creek and the new developments in Molonglo Valley through to the city.

The project remained on budget.

The new works really look good. I am sure the motel will be happy to see their completion.

Well get over it and move the hell on.... another 3 months is not going to make a difference... we've put up with it for Umteen years.... surely we can put up with it a little longer MEH😊😊😊😊

Just have to leave at the right time, still faster than Parkes way

bikhet - 47 minutes ago
A pox on them! They are a blight in Civic and they want to spread them elsewhere? View
Opinion 63

@the_riotact @The_RiotACT
#Phillip will go without its #swimmingpool this Summer after its management confirmed it would not be possible to open for the coming season https://t.co/GfCHMdYSlI (12 minutes ago)