Denman Heights ready to rise after settlement of 101 blocks 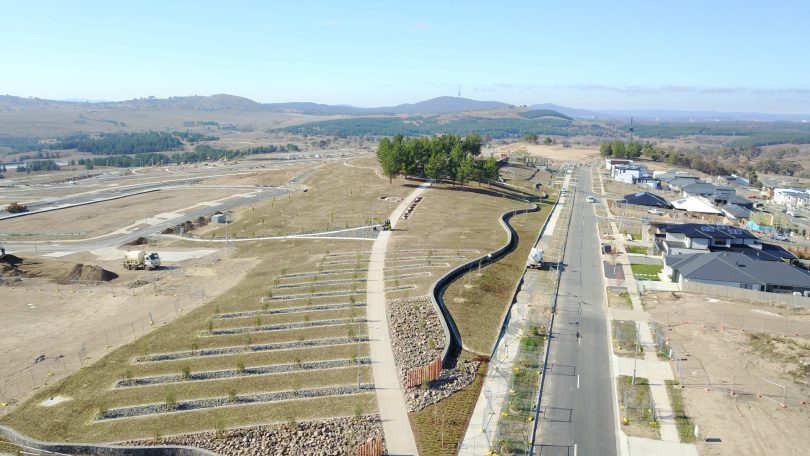 Another milestone for Denman Prospect, with the settlement of 101 blocks at Denman Heights. Photo: Supplied.

New homes will soon start springing up in Denman Heights, part of Capital Airport Group’s Denman Prospect development in the Molonglo Valley, after the settlement today (8 August) of 101 blocks of land.

All 101 sites are located on the north-eastern face of Denman Heights, close to Ridgeline Park and its walking trails, with views across the Molonglo Valley and beyond to the city.

Capital Airport said some blocks of land were sold ‘off the plan’ more than 12 months ago, and buyers could now commence building their homes.

Within the coming months, it was expected that a number of homes would have begun construction.

Capital Airport said that within the next few weeks, several townhouse and apartment sites would also settle, and these would be near the Denman Shops which were scheduled to open later this year. New public art was also set to be unveiled across Denman Prospect in the coming months.

“We have been deliberate about all of the amenities that we are offering our residents and look forward to the shops opening,” Mr McDonald Crowley said.

“Once the community sees this magnificent retail space, our expansive views, and the stunning public art we have added to Denman Prospect, we expect that the few blocks we have left will go rather quickly.

“Our current residents are very happy with their blocks, the homes they have built, and the active community we have created.”

Marea Fatseas - 3 hours ago
Essentially, 80 percent will still go to landfill under this proposal, which is not a great outcome. View
Capital Retro - 12 hours ago
Are you suggesting that while there would be difficulty getting permission in locating and establishing another landfill in C... View
simm - 15 hours ago
It is really just a Waste Tipping Hub (TIP) proposed in the wrong location ... that being a populated built up area on a cong... View
Opinion 2

Capital Retro - 11 hours ago
CSC, this is a brilliant initative. View
chewy14 - 12 hours ago
Capital Retro, Your link doesn't say what you think it does. Firstly, your link is about an audit and it specifically says th... View
Capital Retro - 1 day ago
Data on page 68 of this audit would appear to be at odds with what your colleague concluded: https://www.veolia.com/anz/sites... View
News 14

@The_RiotACT @The_RiotACT
A former chief of the Defence Force has called for the half a billion dollars earmarked for the @AWMemorial expansion to be spent on a research institute for post-traumatic stress. Former AWM director Brendan Nelson has hit back at critics of the proposal https://t.co/4jMIfr02p9 (1 hour ago)