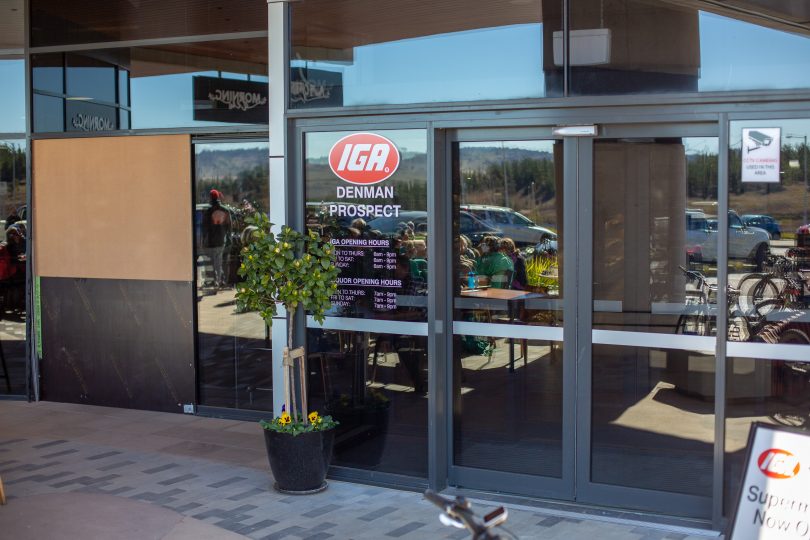 Thieves attempted to steal an ATM from Denman Prospect IGA but were unsuccessful. Photo: George Tsotsos.

Denman Prospect IGA is the latest store to be targeted in a ram raid but thieves have left empty-handed.

Around 2:25 am on Sunday morning (21 July), ACT Policing were called to the Denman Prospect shops following reports that a white Toyota Hilux had been used to force entry into a supermarket.

The thieves attempted to steal an ATM but were unsuccessful, leaving behind a sledgehammer.

It’s the latest in a string of ram-raids targeting Canberra businesses in recent weeks, with 18 other shops across the nation’s capital hit in ram raids since the start of the year.

Police are urging anyone who saw anything suspicious or anyone who has dash-cam footage or CCTV which captured a white Toyota Hilux in the area around the time of the incident, to contact Crime Stoppers on 1800 333 000, or via the Crime Stoppers ACT website.

Chris Hobbs - 31 minutes ago
Time will tell. If they are pragmatic and able to adapt their ideologies to actual plans and policies, it will be an interest... View
David Brown - 3 hours ago
They got disaffected votes from people fed up with both majors. If the Libs can find a moderate leader and develop some sensi... View
HiddenDragon - 3 hours ago
Most of what we've seen from the ACT Greens in the last few terms of government has been fairly standard stuff from the polic... View
Property 37

Capital Retro - 50 minutes ago
One comment on this thread was the Australian Electric Vehicle Associate has given advice to the ACT govt. on its policy that... View
Heavs - 4 hours ago
Five superfluous words in that last sentence. View
JC - 5 hours ago
What policy? Always trying to make a political point. What’s clear is you don’t know much about electronics and electrica... View
News 1

russianafroman - 4 hours ago
Terribly underfunded. Around Gungahlin it's hip height. There should be double or triple the amount of mowers. It's not justi... View
News 32

Michael Hourigan - 12 hours ago
Except that it doesn't Joe View
Lloyd Woodward - 1 day ago
Stop with this boomer thing. Im apparently a Boomer, but think this is a great idea. He is just a sad Panda.... View
News 1

awc73 - 13 hours ago
Imagine if the ACT government could provide 24/7 public access AEDs to all residents and visitors. No need to bang on the doo... View
Property 8

Nick Sifniotis - 14 hours ago
I want this View
News 15

Court Watts - 15 hours ago
Sally Barton Hopefully come March there won’t be any restrictions View
Sally Barton - 16 hours ago
Court Watts - this is good news 😊 View
Nicole Lawler Inveen - 1 day ago
Grace Byrne what a difficult time for you and your family. I hope your little girl gets to meet her baby brother, and that yo... View
Sport 9

Michael Weaver - 16 hours ago
Ack was my go-to for anything in Moruya as a sports journo. Fitting tribute for a great bloke! View
News 10

@The_RiotACT @The_RiotACT
Miss the music: the @CBR_Symphony will be back in 2021 with a new team, old favourites and fresh Australian works. Check out the program https://t.co/rdarOqWtAd (2 hours ago)

@The_RiotACT @The_RiotACT
Art deco elegance and century-old charm are back in Kingston with the opening of Queenies Bar and Good Times https://t.co/svCAn3flWd (3 hours ago)

@The_RiotACT @The_RiotACT
The Oaks in Woden is the ideal property precinct for Canberrans to use the Federal Government's HomeBuilder grant to their advantage https://t.co/70jE9wSTeR (4 hours ago)