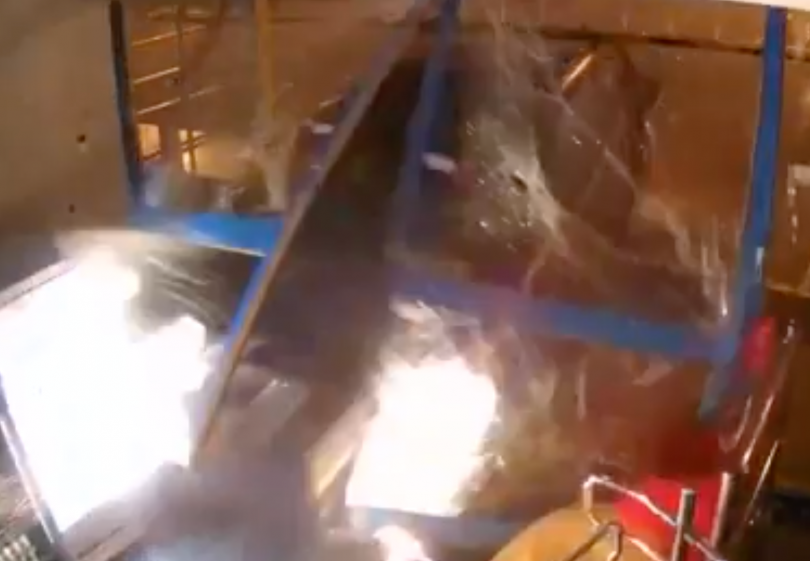 A still of the Greenway ram raid shows the Hilux crashing through the front doors on 13 June.

Police have reassured local businesses that they are doing everything they can to arrest the criminals behind the spate of ram raids in the past couple of months, as police investigate 10 ram raids since the start of June.

Detective Acting Station Sergeant Shane Scott said police have set up a specialised unit and are dedicating “significant resources” to investigate 18 ram raids – or what police call aggravated burglaries – across the territory since the start of the year.

Detective Acting Station Sergeant Scott believes that more than one group of people are responsible for the ram raids and would not rule out that some of the ram raids could be due to copycat criminals.

“We do have a dedicated number of detectives looking into this and we are coordinating a response,” he said. “As part of that, we are encouraging the public to be involved in the process and provide information to us.

“We are putting significant resources into this across the ACT. These crimes are obviously impacting businesses in the ACT and as part of that, we are calling for the public’s assistance in identifying these groups responsible.”

Detective Acting Station Sergeant Shane Scott spoke to media about the hard work being undertaken to catch those responsible for aggravated burglaries on Canberra businesses this year, with ten incidents in the past month. Anyone with information should contact Crime Stoppers. pic.twitter.com/LA5kpBxRTS

When pressed as to why ACT Policing has not made any arrests despite the spate of ram raids, Detective Acting Station Sergeant Scott assured businesses and the public that the police were taking the incidents very seriously.

“We have been looking at these crimes since the moment they started,” he said. “With an increase in the last month, that has brought it to the fore through media and through businesses.

“This is something they are concerned about but we are treating every single crime with the same respect and dedication for all the incidents that have happened this year.

“I can assure businesses and the public that we are doing everything we can to solve these crimes. For the crooks, we are looking for you and we are going to get you.”

Detective Acting Station Sergeant Scott said the criminals’ M.O. had made it difficult for forensic investigations but was adamant police would find the people responsible.

“Aggravated burglaries occur across the ACT on every single day, whether that be a burglary on residences or business premises,” he said. “Obviously with a vehicle crashing through a door, it limits the forensic capability but we take other avenues to identify the offenders.

“Stolen vehicles are primarily being used in these offences so they come from various locations, whether it be from a residential burglary or parked on the street.

“My opinion is that these are fairly opportunistic crimes, due to the fact that they are targetting businesses that don’t have bollards placed in front of doors, they might look for a business with particular alarm systems.

“We also encourage businesses to review their own security practices.”