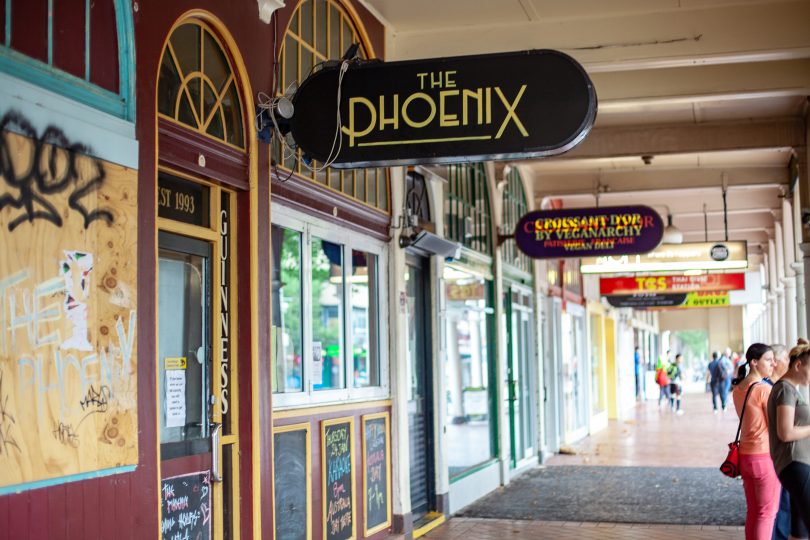 The Phoenix has closed its doors until further notice. Photo: George Tsotsos.

Despite community fundraisers, a mini-series and the owner’s best efforts, embattled independent music venue The Phoenix has called last drinks and has closed its doors until further notice.

The bar, located in Civic’s Sydney Building, has been a popular music venue since it opened 25 years ago, but the business has faced a string of financial setbacks since fire damaged the venue in February 2014.

In January last year, The Phoenix launched a last-minute crowdfunding campaign to keep its doors open and trade its way out of trouble, raising $55,000 from the campaign and direct donations.

But despite the community’s best efforts, it looks like the iconic city venue’s days have been numbered. Via a Facebook post, pub owner Sean Harrigan said the venue was still waiting for an insurance claim from the devastating fire that tore through the heritage-listed Sydney Building five years ago.

“Last year, you saved The Phoenix from being permanently shut down through the amazing support through the GoFundMe campaign and all the bands’ never-ending support,” the statement read.

“For the last year we have been awaiting the insurance claim from the fire five years ago, however, as it still has not cleared we cannot commit to another quarter of licensing/insurance fees until it does.

“We have been repeatedly advised that it would clear by this week, but as it has not we unfortunately have to shut until it does.”

Since the fire, which caused damage extending from the premises and roof above the original pub next door to the present operating space into which the Phoenix had expanded, the business had lost up to $5 million in trade, fought an exhausting legal battle and incurred a demand for back rent from LJ Hooker of $200,000, despite not being able to operate the premises for much of the time.

Though the fire did little damage to the original space, insurance issues delayed its reopening, and then in January 2015 heavy rain poured through the still unrepaired roof due to tarpaulins not being secured properly.

Mr Harrigan said the venue had been facing a fight on three fronts: the fallout from the eviction by LJ Hooker commercial real estate; an uninsured landlord from the Old Phoenix Pub, and, Iori Group (whose restaurant was the source of the fire) contesting the The Phoenix’s insurance claim.

“We are not giving up and hope to inform you of our reopening soon.”

Ben Phillips - 9 minutes ago
There’s about 20 acres sitting unused next to Lyneham primary. Mixing in some high density housing (units) with community p... View
Jenny Lawrence - 24 minutes ago
Joshua F. Johnson any form they take, including the current one, closes off some uses - that's not an argument not to conside... View
Joshua F. Johnson - 30 minutes ago
Jenny Lawrence they’re not “ovals” they’re just open outdoor spaces. You might want a pool there. You want want the D... View
News 2

JS9 - 59 minutes ago
The solution is relatively simple. Its called petrol stations becoming EV stations, which in a lot of areas will be the solut... View
Elf - 1 hour ago
Reality is, at the moment these are ok as a second car. If you want to be able to travel, there is no infrastructure to enabl... View
News 18