Canberra’s high-end hotel boom is continuing with the national capital’s first Marriott offering being announced after the global company struck a deal with Geocon’s Iconic Hotels division to operate the property giant’s Midnight Hotel in Braddon.

The Canberra Business Chamber says the deal shows that the national capital has come of age as a tourism destination and the big chains such as Marriott and Hilton, which has an unsolicited proposal for a 5-star development before the ACT Government, have recognised this.

It will be the second hotel for the brand to open in Australia, following the recently renovated Pier One Sydney Harbour.

Marriott’s Senior Director, Hotel Development, Australia, New Zealand and Pacific, Richard Crawford said the deal marked a significant milestone for the company being its first in the capital of Australia.

“We look forward to working closely with Iconic Hotels to bring this hotel to this market,” he said.

Geocon Managing Director Nick Georgalis said Canberra was in a period of unprecedented growth, with demonstrated year on year increase in domestic and international travel to the national capital.

“Our collaboration with Marriott International through Iconic Hotels perfectly aligns with this growth and enables us to cater for increased hospitality demands on a global scale as well as promote Canberra on an international stage,” he said.

Part of the 199-room hotel is an existing central garden atrium landscaped by leading Australian urban design architects, OCULUS, while the building itself is designed by acclaimed architect firm, Fender Katsalidis.

The hotel will also include facilities such as a restaurant, bar, indoor swimming pool, wellness centre, conference and event spaces and a guest lounge.

The Marriott deal comes after the Hilton proposal to establish a presence in Canberra became public earlier this month.

Geocon itself also plans a five-star hotel in Garema Place, the redevelopment of the historic West Block building in Parkes into a luxury hotel and a high-end offering in the Kingston Arts Precinct, which it is developing for the ACT Government.

In June, Accor introduced its first Sebel-branded apartment hotel to Canberra with the opening of the 144-room The Sebel Canberra Civic, built by Canberra developer, Zapari.

Canberra Business Chamber CEO Michael Schaper said the Geocon-Marriott deal was indicative of steady tourism growth across the capital region and the companies would have identified a gap in the market for up-market hotel tourism offerings.

He said the new entrants would bring some welcome competition, as well their own need to promote the national capital.

“It will encourage them to bang the drum even more for Canberra because if you’ve got beds, they’ve got to be filled,” Dr Schaper said.

The hotel growth would also drive the business market but Canberra would still need a refurbished or new convention centre to deal with the big-delegate events.

“We’d like to see government do some pre-planning for that new build,” Dr Schaper said, to send a signal to industry that it is on the agenda.

“We don’t know when it might happen … and we’re missing out on opportunities,” he said.

Since its establishment as an independent local hotel operator in 2010, Iconic Hotels has delivered seven hotels to the accommodation market, and two food and beverage outlets.

Midnight Hotel is the first hotel within the Iconic Hotels brand portfolio to sign with a hotel partner. 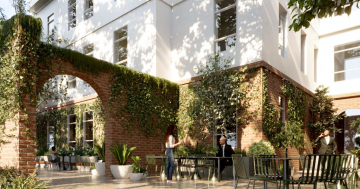