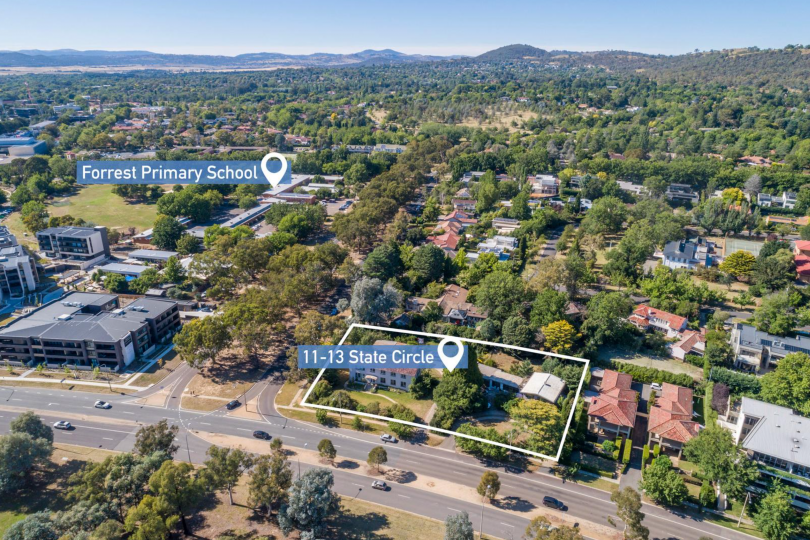 A plot of land at 11-13 State Circle in Forrest sold for more than $8.4 million last week, $2 million above its reserve price. Photo: Supplied.

A prime piece of land on State Circle in Forrest that has not changed hands since 1962 sold at auction for a remarkable $8,410,000, almost $2 million over the reserve, to an undisclosed buyers’ consortium last week.

Luton Properties auctioneer Richard Luton called the sale on Thursday, 18 March, which was hotly pursued by 11 registered bidders representing developers and private interests. The sale was through Luton Property sales agents Melissa Martin-Smith, Miriana Cavic and Richard Luton, and the auction was conducted at the Luton boardroom in Fyshwick.

The plot is located on the corner of Hobart Avenue at 11-13 State Circle in Forrest, and the sale included plans for the construction of 42 apartments designed by Cox Architects. The successful bidder intends to draw up their own plans for the site, says Melissa.

“A lot of the buyers who were looking throughout the process were always going to change the plans for the site,” she says. “And the developers’ consortium that bought it came in and saw the site only the day before the auction.

“It just goes to show the strength of the developer market in Canberra. There were 11 bidders and it was heated.

“It took about half an hour to get to the end of the auction, with consistent bidding and not much lag.”

The parcel of land belonged to the descendants of Sir Cyrus Lenox Hewitt – who was Prime Minister John Gorton’s Secretary – who bequeathed it to them when he passed away in February 2020.

“I’m sure it will be a high-end development,” says Melissa. “You only have to look across the road at what Addval did with the Estate and the Dominion Residences, and the developer is one who has done some very nice work in Canberra before.

“It will be a prestigious development which will suit young professionals and downsizers, and it’s not uncommon for politicians to buy into developments such as this one.”

Canberra’s housing market has continued to strengthen throughout 2021, but Melissa does not expect to be beating the $8 million mark again.

“I don’t think I’ll be topping that for a while,” she says. “We’ll probably come off the boil in the next two to three months – the research we do indicates this market can’t continue. You just can’t have a rising market forever.”